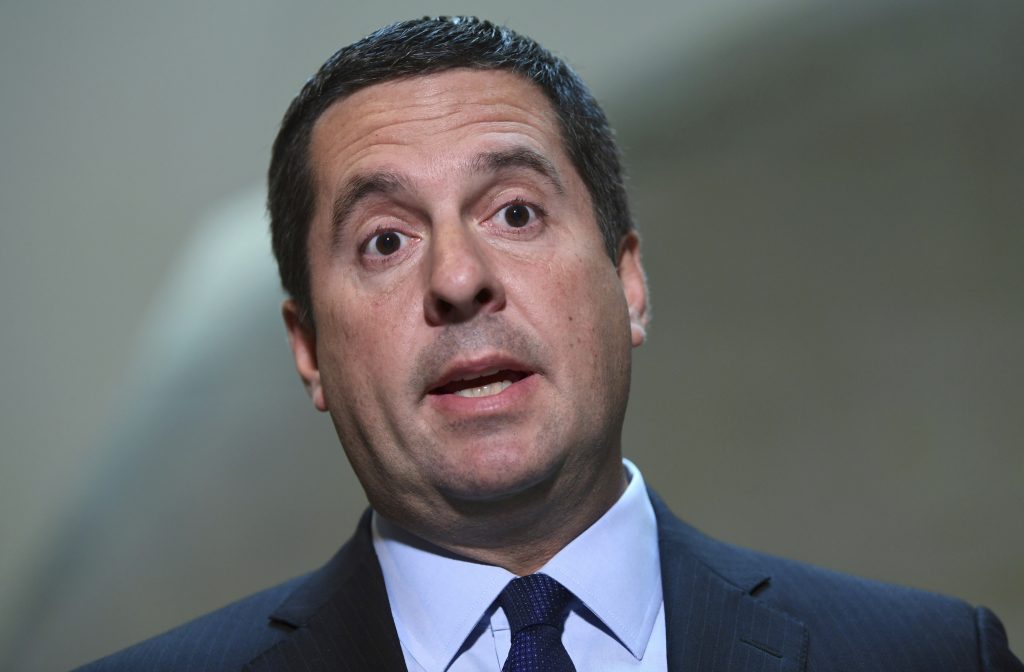 House Republicans are drafting a contempt of Congress resolution against Deputy Attorney General Rod Rosenstein and FBI Director Christopher Wray, claiming stonewalling in producing material related to the Russia-Trump probes and other matters.

Intelligence Chairman Devin Nunes and other committee Republicans, after considering such action for several weeks, decided to move after media including the New York Times reported Saturday on why a top FBI official assigned to Special Counsel Robert Mueller’s probe of Russia-Trump election collusion had been removed from the investigation.

Republicans, including the president, pointed to the reports as evidence that the entire probe into Russian meddling has been politically motivated.

“Now it all starts to make sense,” Trump said on Twitter Sunday.

In his statement Saturday, Nunes pointed to the reports that the official, Peter Strzok, was removed after allegedly having exchanged anti-Trump and pro-Hillary Clinton text messages with a friend, who was an FBI lawyer working for Deputy FBI Director Andrew McCabe.

Another Trump tweet referred to the agent as “tainted (no, very dishonest?).” The president added that the FBI’s reputation “is in Tatters – worst in History!” In a busy morning of notes to his 44 million followers, Mr. Trump earlier said that “I never asked” former FBI Director James Comey “to stop investigating Flynn. Just more Fake News covering another Comey lie!”

Until now, Nunes said, the FBI and Department of Justice have failed to sufficiently comply with an Aug. 24 committee subpoena, including by refusing repeated demands “for an explanation of Peter Strzok’s dismissal from the Mueller probe.”

“In light of today’s press reports, we now know why Strzok was dismissed, why the FBI and DOJ refused to provide us this explanation, and at least one reason why they previously refused to make Deputy Director McCabe available to the Committee for an interview,” Nunes said.

“By hiding from Congress, and from the American people, documented political bias by a key FBI head investigator for both the Russia collusion probe and the Clinton email investigation, the FBI and DOJ engaged in a willful attempt to thwart Congress’ constitutional oversight responsibility,” he said.

Nunes, in the statement, said the committee will move on a resolution by the end of the month unless its demands are “fully met” by the close of business Dec. 4.

He cited “a months-long pattern by the DOJ and FBI of stonewalling and obstructing this Committee’s oversight work,” including also withholding subpoenaed information about their use of an opposition research dossier that targeted Mr. Trump in the 2016 election.

Attorney General Jeff Sessions would not be a target of any contempt action by the committee, Nunes has said, because he recused himself from any investigation into charges that Russia meddled in the election.

Justice Department spokeswoman Sara Isgur Flores said in an email that “we disagree with the chairman’s characterization and will continue to work with congressional committees to provide the information they request consistent with our national security responsibilities.”

The department has already provided members of House leadership and the Intelligence Committee with “several hundred pages of classified documents” and multiple briefings — including whether any FBI payments were made related to the dossier, and has cleared witnesses including McCabe and Strzok to testify, she said.

The House committee’s top Democrat, Rep. Adam Schiff of California, responded in a statement that the Department of Justice inspector general is “properly investigating the handling of the investigation, including the current allegation of bias” by Strzok.

“I am concerned, however, that our chairman is willing to use the subpoena and contempt power of the House, not to determine how the Russians interfered in our election or whether the president obstructed Justice, but only to distract from the core of our investigation,” Schiff said.

The dossier, which included salacious allegations about Trump, was paid for in part by the Democratic National Committee and Clinton through a law firm. Nunes and other committee Republicans — backed by Speaker Paul Ryan — say they want to investigate whether the Justice Department and FBI may have improperly relied on the dossier to kick-start federal surveillance that caught up Trump associates, without independently confirming the information they used to justify such spying.

“The DOJ has now expressed — on a Saturday, just hours after the press reports on Strzok’s dismissal appeared — sudden willingness to comply with some of the Committee’s long-standing demands,” Nunes said. “This attempted 11th-hour accommodation is neither credible nor believable, and in fact is yet another example of the DOJ’s disingenuousness and obstruction.”

Those agencies “should be investigating themselves,” he said.

If Nunes and Republicans do follow through with the contempt action, it would be a latest blow against bipartisanship on a committee that had until recently been one of the last bastions of comity in a polarized House. Democrats complain Republicans are increasingly shifting attention and limited resources in the Russian investigation away from a main focus of election interference and potential Trump campaign collusion.

The committee’s infighting has stepped up since October, coinciding with Democratic complaints that Nunes has returned to a more active capacity for Republicans in the committee’s Russia investigation.

Nunes said April 6 he was stepping back amid criticism of his handling of classified material, reportedly obtained from White House officials, that he said showed officials of former President Barack Obama’s administration “unmasked” the identities of people close to Mr. Trump who were mentioned in legal surveillance of foreign individuals.

Rep. Michael Conaway of Texas officially has taken over the Republican reins from Nunes on the investigation. But Nunes’ statement Saturday is another signal he’s returned to a leading role.