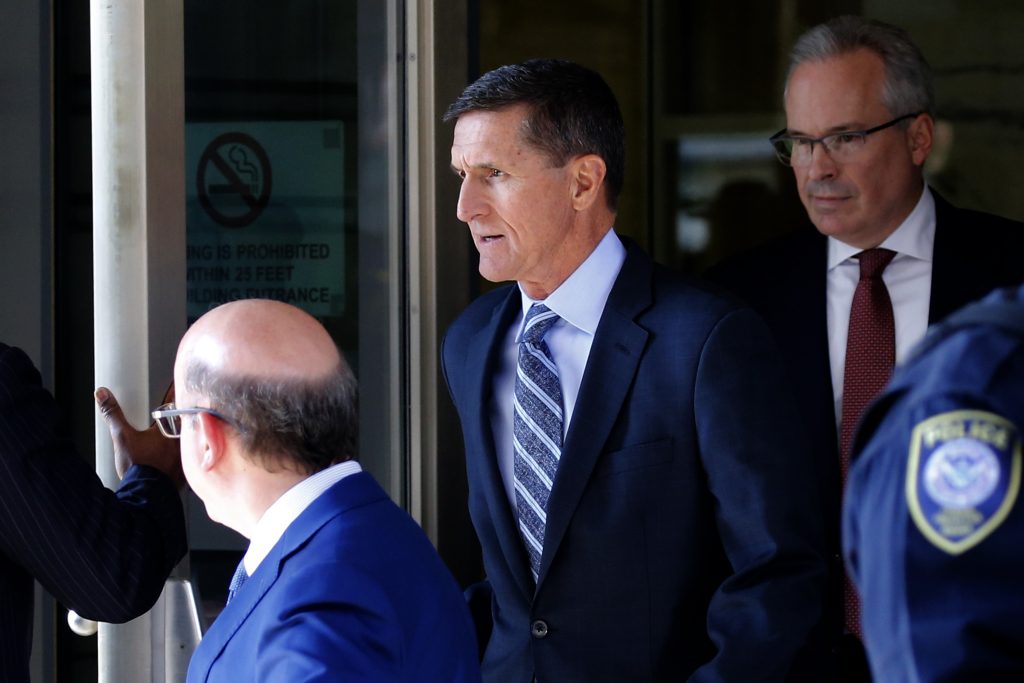 President Donald Trump said on Saturday that actions by his disgraced former national security adviser Michael Flynn during the presidential transition were lawful and that there was no collusion between his 2016 White House campaign and Russia.

Flynn was the first member of Trump’s administration to plead guilty to a crime uncovered by special counsel Robert Mueller’s wide-ranging investigation into Russian attempts to influence the 2016 U.S. presidential election and possible collusion by Trump aides.

“I had to fire General Flynn because he lied to the Vice President and the FBI. He has plead guilty to those lies,” Trump said on Twitter while he was in New York for a fundraising trip. “It is a shame because his actions during the transition were lawful. There was nothing to hide!”

Flynn, a former Defense Intelligence Agency director, held his position as Trump’s national security adviser only for 24 days. He was forced to resign after he was found to have misled Vice President Mike Pence about his discussions with Russia’s then-ambassador to the United States Sergei Kislyak.

“What has been shown is no collusion, no collusion,” Trump told reporters as he departed the White House for the New York trip. “There’s been absolutely no collusion, so we’re very happy.”

As part of his plea on Friday, Flynn agreed to cooperate with the investigation.

The retired U.S. Army lieutenant general admitted in a Washington court that he lied to FBI investigators about his discussions last December with Kislyak.

In what appeared to be moves undermining the policies of outgoing President Barack Obama, the pair discussed U.S. sanctions on Russia, and Flynn asked Kislyak to help delay a United Nations vote seen as damaging to Israel, according to prosecutors.

Flynn was also told by a “very senior member” of Trump’s transition team to contact Russia and other foreign governments to try to influence them ahead of the vote, the prosecutors said.

Meanwhile, a veteran FBI counterintelligence agent was removed from special counsel Robert Mueller’s team investigating Russian election meddling after the discovery of an exchange of anti-Trump text messages, a person familiar with the matter said.

The removal of the agent, who also had worked on the investigation of Hillary Clinton’s use of a private email server, occurred this summer.

Peter Carr, a spokesman for Mueller, said Mueller removed the agent, Peter Strzok, from the team “immediately upon learning of the allegations.”

The decision was likely in keeping with the Justice Department’s desire to insulate the investigators from claims of political bias or favoritism. President Donald Trump and many of his supporters have sought to discredit the investigation, in part by claiming a close relationship between Mueller and fired FBI Director James Comey and by pointing to political contributions to Democratic candidates made by some lawyers on the team.

The nature of the messages Strzok exchanged and with whom he communicated was not immediately clear. The Justice Department’s inspector general is investigating the matter.

Strzok was present during Clinton’s July 2016 interview with the FBI about her use of a private email server while she was secretary of state, according to an unclassified summary of the interview commonly referred to as an FBI 302 form. Several other FBI agents and officials from the Justice Department also attended.

On Saturday, the Justice Department’s inspector general’s office released a statement confirming that it was continuing to review unspecified allegations made about the department’s and the FBI’s actions “in advance of the 2016 election.”

“The OIG [Office of Inspector General] has been reviewing allegations involving communications between certain individuals, and will report its findings regarding those allegations promptly upon completion of the review of them,” the inspector general’s office said.

The statement didn’t refer to any agents or officials by name.