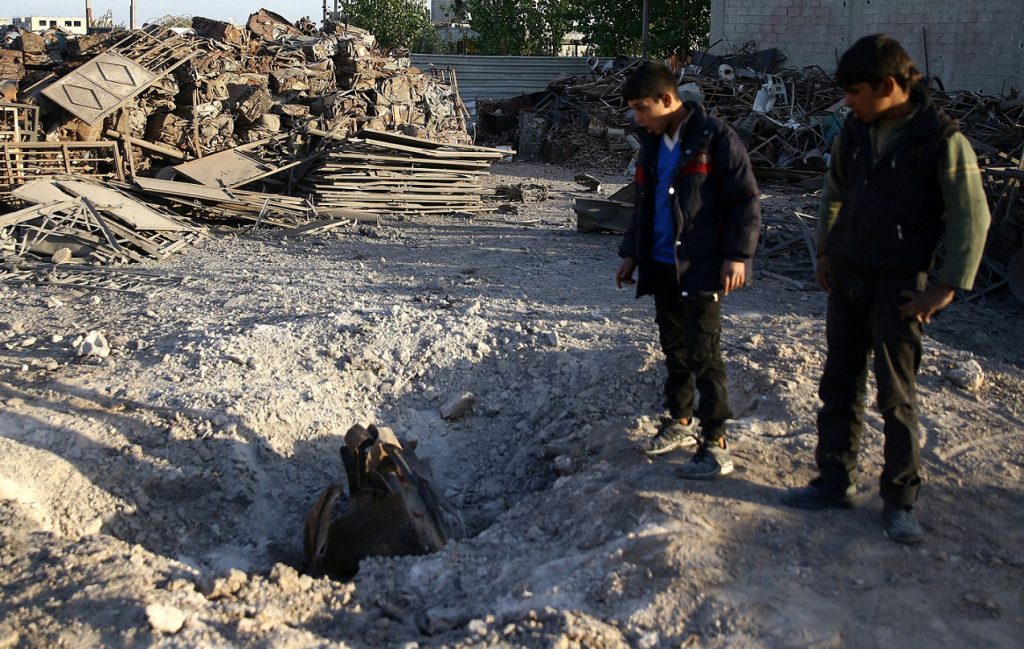 Amnesty International said Thursday the Syrian government has used internationally banned cluster munitions in attacks on a besieged rebel-held suburb of Damascus, accusing it of committing war crimes on “an epic scale.”

The report came on the second day of U.N.-sponsored talks in Geneva in the latest push to find a political settlement to the nearly seven-year civil war in Syria.

The Amnesty International report called attention to the calamitous humanitarian situation at the doors of the Syrian capital, where the government and its backers have kept a suburban enclave of 400,000 people under siege since 2013.

The Eastern Ghouta region, one of the hubs of the uprising against President Bashar Assad in 2011, is now facing the highest recorded malnutrition rate in the country since the outbreak of war, the U.N. reported Wednesday.

Based on interviews with activists in eastern Ghouta and verification of open source videos and photographs, Amnesty said at least 10 civilians were killed in November because of the government’s use of the banned Soviet-made cluster munitions.

“The Syrian government has shown callous disregard to the lives of the hundreds of thousands of people living in Eastern Ghouta,” said Philip Luther, Amnesty International’s Research and Advocacy Director for the Middle East and North Africa. “But this recent escalation in attacks — clearly targeting civilians and civilian infrastructure using internationally banned cluster munitions — is horrific.”

The United Nations has said it is concerned about the ongoing violence in Eastern Ghouta, which has intensified since Nov.14.

The Britain-based Syrian Observatory for Human Rights, which tracks the civil war, has recorded that at least 150 civilians, including 35 children, were killed since Nov. 14 in the suburb, when a renewed round of intense fighting began.

Russia informed the U.N. on Tuesday that the Syrian government had agreed to a 48-hour truce in the area at the start of a new round of U.N.-sponsored talks in Geneva. Local activists and the Syrian Observatory for Human Rights monitoring group reported that the government was shelling the region again Thursday.

Also on Thursday, U.N. Special Envoy Staffan de Mistura consulted separately with delegations from the government and the opposition about a list of principles that the envoy said could form the basis of a “shared future vision of Syria.”

“They are important because they might guide the drafting of a new constitution and be an entry point for genuine reconciliation discussions,” he said at a news conference.

He said it would be “premature” to share twelve principles under discussion.

The two sides, which have only rarely sat face-to-face in talks, were placed in rooms five meters (15 feet) from each other, de Mistura reported, with the envoy and his staff shuttling between them.

He said direct talks were not a priority for this round, which he announced would run until Dec. 15.

Diplomats are hoping the parties to the Syrian conflict may be ready to make some forward progress in talks. There is little optimism, however, that the current round — the eighth so far — would achieve any significant breakthroughs.

This time, de Mistura is sidestepping the divisive issue of Assad’s future in Syria and is asking the delegations to focus on constitutional reforms and getting to U.N.-supervised elections, instead.

Opposition spokesman Yahya Aridi said his delegation was “ready to stay engaged in the talks as long as necessary.” He said the opposition was looking forward to serious negotiations over a “transition to freedom” in Syria, including releasing detainees held in government prisons.

Separately, Turkey sent troop reinforcements and howitzers to its border with Syria, amid warnings by President Recep Tayyip Erdogan and other officials that Turkey may intervene to contain the Kurdish group that is running north Syria. Turkey’s state-run Anadolu Agency reported the deployment.

Turkey sees the Democratic Union Party (PYD) and its armed wing the People’s Protection Units (YPG) as a security threat. The PYD is an affiliated organization of a Kurdish separatist movement in Turkey.

Also on Thursday, the U.S. announced that more than 400 Marines were being sent home after completing its mission providing artillery fire support in the war on the Islamic State group.

The Marines, part of a force estimated at over 1,500 U.S. troops in Syria, were supporting the YPG and allied Arab fighters to defeat Islamic State militants in their de-facto capital, the north Syrian city of Raqqa. The city fell on Oct. 20.

The U.S. support for the Kurds has been a major source of friction in relations with Turkey, which is a NATO member. With the IS group largely defeated in Syria, the White House informed Ankara last week that it was “adjusting” its military support to its partners. Still, U.S. officials are suggesting they plan to maintain a U.S. troop presence in the north until an overall settlement for the war is found.