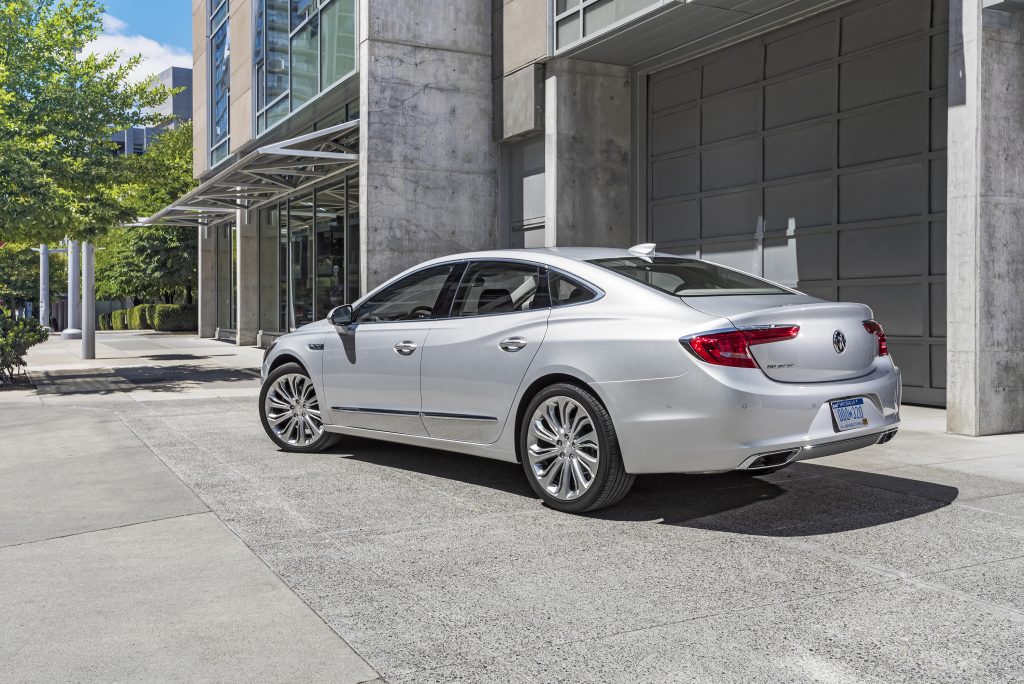 This car is aimed at professionals in their 30s who are looking for a bridge between a mass-market sedan like a Honda Accord and a more-expensive luxury brand such as BMW or Mercedes.

That has been the goal since the first modern version of the LaCrosse went on sale in 2009, and it has been a great success so far, with about 1 million LaCrosses sold since the 2009 rollout.

Buick says the redesign last year gave the LaCrosse the “new face of Buick,” including a new, larger signature waterfall grille with the return of the three-color Buick shield – red, silver and blue –and such features as high-intensity discharge headlights, LED signature lighting, and LED taillights.

For 2018, there is a new standard 2.5-liter four-cylinder engine with an eAssist light electrification system as the standard power on the LaCrosse. With a six-speed automatic transmission, it brings GM-estimated fuel-economy ratings of 25 mpg city/35 highway/29 combined.

A new nine-speed automatic transmission comes with the optional 3.6-liter V-6 engine ($2,500 extra), which is available with all-wheel drive ($2,200) on the top two trim levels.

Not a full-blown hybrid system like that of the Toyota Avalon Hybrid, the eAssist provides a power boost from a small electric motor and onboard battery pack for start-up, and adds torque for passing and uphill freeway ramps. It also helps boost fuel efficiency.

The system includes regenerative braking, which diverts some of the energy normally lost during braking or coasting back to the lithium-ion battery pack through a motor/generator. It also has upper and lower aero shutters to reduce drag for enhanced efficiency.

Our test vehicle was the Premium front-drive model with the V-6 engine ($2,500) in the Quicksilver Metallic exterior color ($395 extra), and the Ebony interior with perforated leather seats.

The Premium comes with the best interior, with the perforated leather upholstery and a new, standard lumbar massage feature (great for an aching back).

Outside and inside, the LaCrosse also is elegant without any hint of overdoing it, and we found the front bucket seats to be among the most comfortable we’ve tested among sedans in this class, and even above.

Buick has added places to store and connect smartphones in the center console between the driver and front passenger, something the previous model was seriously lacking. You no longer have to put your phones in the cupholders.

Rear passengers had surprisingly roomy accommodations, particularly in the two outboard positions. There was ample knee and legroom, and when there was no third person riding in the back, a pull-down center armrest was available with dual cupholders.

At the bottom rear of the front center console are 12-t and 120-volt power outlets for the backseat passengers, ready to power laptops and game consoles as well as smartphones.

All trim levels come with Buick’s QuietTuning, which is designed to reduce or block outside noise and vibration. That helped make our vehicle quiet at highway speeds, except for some occasional noise from rough pavement.

With last year’s remake, the LaCrosse is longer, lower and wider than before, and about 300 pounds lighter, which GM attributes to the use of high-strength steels.

Fuel efficiency is enhanced by the automatic stop/start system, which shuts off the engine at stoplights and restarts it when the driver lifts the foot off the brake pedal; and the Active Fuel Management system on the V-6, which cuts the engine down to four cylinders during level highway cruising.

As with other recent new GM premium vehicles, the LaCrosse comes with long-lasting DuraLife brake rotors, with four-wheel antilock disc brakes standard. Other new features include enhanced electric power steering, a new five-link rear suspension standard on all levels, and a remote starting system with keyless open and pushbutton start also included across the board.

Wireless charging for compatible smartphones is standard on Essence and Premium trims. And the Teen Driver feature, standard on all models, lets parents set controls, review driving habits and encourage safe driving habits of their kids even when the parents are not present in the vehicle. This includes pre-set speed and audio volume controls.

Connectivity for compatible devices is possible through the IntelliLink audio/navigation system, which includes an eight-inch color touchscreen, along with Apple CarPlay and Android Auto capability, and the OnStar 4G LTE internet connection with onboard wi-fi hotspot – standard on all models.

Among standard safety features are 10 air bags, including knee air bags for the driver and front passenger; and a standard rear-vision camera system.

Forward Collision Alert and Following Distance Indicator are standard on Premium models, along with the Safety Alert Seat, which pulse-vibrates to warn the driver of a possible impending forward collision or rear cross-traffic event, such as when backing out of a driveway into traffic. We also had ultrasonic rear park assist.

The Driver Confidence Package 1 — available on the Essence model and standard on the Premium – brings the Rear Cross-Traffic Alert, Side Blind Zone Alert and Lane Change Alert.

The head-up display included on the Premium model projected speed, navigation and audio information on the lower part of the windshield in front of the driver, and was adjustable for height (position) and brightness, using a switch on the left side of the steering wheel on the lower dash.

Our front seats had eight-way power adjust, along with four-way power lumbar support with the massage feature; and were heated and ventilated. Memory settings controlled the driver and passenger seats, steering wheel position, and outside driver’s mirror. The steering column was power tilt and telescopic, and the steering wheel was heated.

An eight-inch driver-information display was above the steering column in the middle of the instrument panel.

Outside mirrors were power/heated/auto-dimming with built-in turn signals. We also had adaptable front headlights that automatically turned slightly in the direction the car was turning.

Our Sun and Shade Package ($1,550) added a power sunroof and second-row skylight, with a power rear sunshade.

The exterior of our car was Quicksilver Metallic, which cost $395 extra. The interior was Ebony.

With options and freight, the total sticker price of our V-6 Premium front-drive LaCrosse was $47,350, which brought us a well-equipped, beautiful luxury sedan with lots of curb appeal, plenty of power, and numerous high-tech safety and connectivity features.

Highlights: Redesigned for 2017, this is Buick’s premium large sedan, available with a variety of high-tech options and intended to appeal to a more-youthful audience than the traditional Buicks of the past. It gives GM a strong competitor against the leading Japanese and European premium sedans.