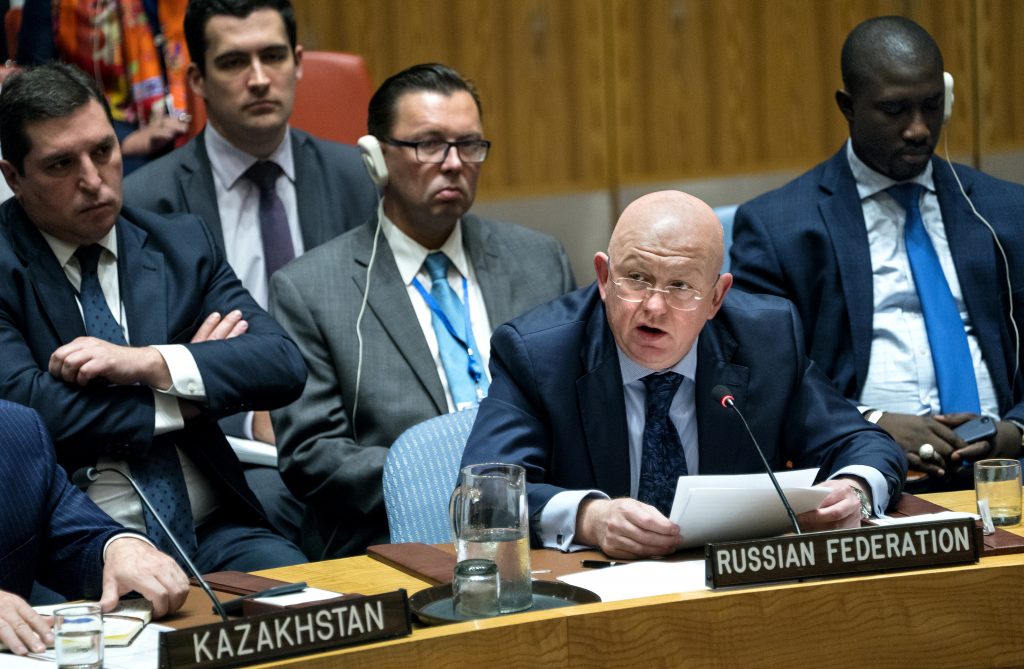 Russia on Thursday cast its 10th veto of United Nations Security Council action on Syria since the war began in 2011, blocking a U.S.-drafted resolution to renew an international inquiry into who is to blame for chemical weapons attacks in Syria.

The mandate for the joint inquiry by the U.N. and the Organization for the Prohibition of Chemical Weapons (OPCW), which found the Syrian government used the banned nerve agent sarin in an April 4 attack, expires at midnight Thursday.

A resolution needs nine votes in favor and no vetoes by the United States, France, Russia, Britain or China to be adopted. The U.S. draft text received 11 votes in favor, while Russia and Bolivia voted against it and China and Egypt abstained.

The vote sparked a war of words between Russia and the United States in the council, just hours after White House spokeswoman Sarah Sanders said President Donald Trump believed he could work with Russian President Vladimir Putin on issues like Syria.

The April 4 sarin attack on Khan Sheikhoun that killed dozens of people prompted the United States to launch missiles on a Syrian air base. U.S. Ambassador to the United Nations Nikki Haley warned after the council vote on Thursday: “We will do it again if we must.”

“The Assad regime should be on clear notice – the United States does not accept Syria’s use of chemical weapons,” she told the council, referring to Syrian President Bashar al-Assad.

Russian U.N. Ambassador Vassily Nebenzia said the U.S. draft resolution was not balanced and that an aim by Western powers to disparage Russia had “surpassed the importance of safeguarding the mechanism.”

“We need a robust, professional mechanism that will help to prevent the proliferation of the threat of chemical terrorism in the region and you need a puppet-like structure to manipulate public opinion,” Nebenzia said.

Syrian ally Russia withdrew its own rival draft resolution to renew the inquiry, known as the Joint Investigative Mechanism (JIM), after unsuccessfully pushing for its proposal to be considered second and not first, as council rules required.

However, following the vote on the U.S. draft, Bolivia then requested a vote on the Russian text. It failed, receiving only four votes in favor, seven against and four abstentions.

Nebenzia said he was “deeply disappointed” and that those who voted against the Russian draft “bear the full brunt of responsibility for the cessation of operation of the JIM.”

Ahead of the council votes, Trump on Thursday urged the Security Council to renew the inquiry, saying it was needed to prevent Assad from using chemical weapons.

While Russia agreed to the 2015 creation of the JIM, it has consistently questioned its findings, which also concluded that the Syrian government used chlorine as a weapon several times.

Russia has now vetoed 10 resolutions on Syria, including blocking an initial U.S. bid on Oct. 24 to renew the JIM, saying it wanted to wait for the release two days later of the inquiry’s report that said the Syrian government used sarin.

“Russia has killed the Joint Investigative Mechanism … Russia has undermined our ability to deter future attacks,” Haley said. “In effect Russia accepts the use of chemical weapons in Syria. How then can we trust Russia’s support for supposed peace in Syria?”

Syria agreed to destroy its chemical weapons in 2013 under a deal brokered by Russia and the United States.

“We condemn the use of chemical weapons by anyone, whatever the circumstances are. The perpetrators of such crimes must be held accountable,” Nebenzia said.