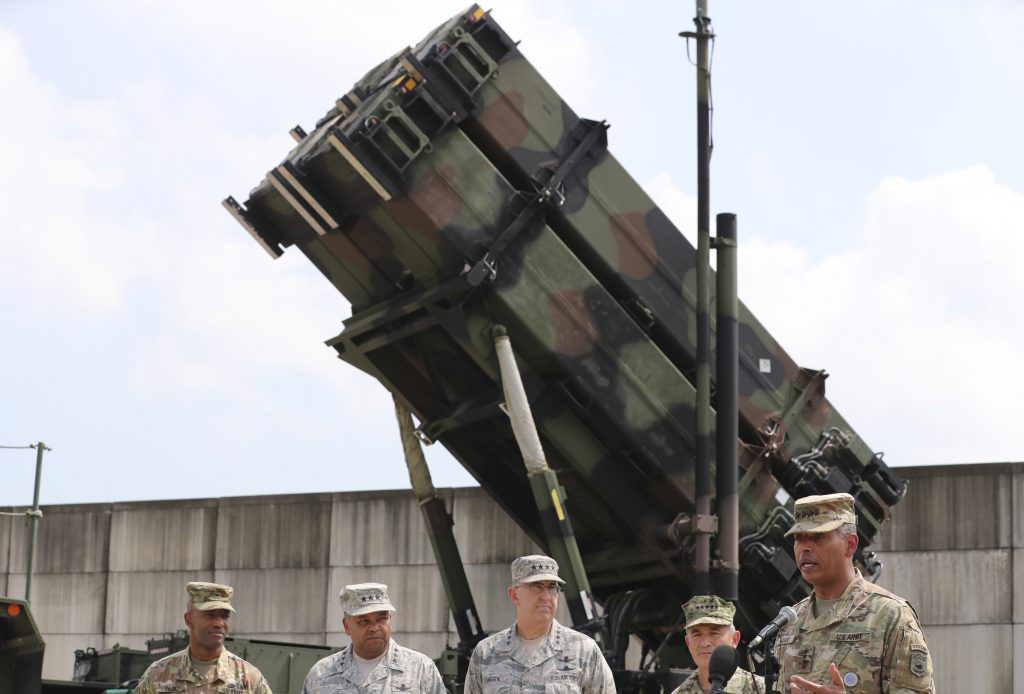 Lawmakers voted 356-70 to pass the legislation, with 127 Democrats backing the measure. Once the defense bill clears the Senate, which is expected this week, the bill will be sent to President Donald Trump for his signature.

The defense bill for the 2018 fiscal year allots some $634 billion for core Pentagon operations and nearly $66 billion for wartime missions in Afghanistan, Iraq, Syria and elsewhere. The funding boost pays for more troops, jet fighters, ships and other weapons needed to halt an erosion of the military’s combat readiness, according to the bill’s backers.

Pres. Trump’s 2018 request sought $603 billion for basic functions and $65 billion for overseas missions. But securing the higher amounts remains contingent upon Congress reaching an agreement to roll back a 2011 law that set strict limits on most federal spending. That’s a lot harder than it sounds, however. Lifting the budget caps will face resistance from Democrats who also are seeking to increase the budgets for domestic agencies.

Rep. Adam Smith of Washington, the top Democrat on the House Armed Services Committee, voted for the bill while also criticizing Congress for refusing to come to grips with its out-of-control approach to budgeting. Smith said it’s inconsistent for Republicans to push for billions of dollars more in defense spending while also advocating tax overhaul legislation that will deepen federal deficits over the next decade.

Even if Congress had a “fit of fiscal responsibility” and decided to raise revenue instead of cutting it, Smith said, “we’re still looking at needs within the national security budget … that are wildly beyond the amount of money that we have.”

Republicans insist tax cuts will essentially pay for themselves by spurring economic growth. But the Armed Services Committee chairman, Rep. Mac Thornberry, R-Texas, urged his colleagues to focus on the military’s immediate and substantial needs.

“It is morally wrong to send men and women out on missions with our military, for which they are not fully supported, fully trained, (and) equipped with the best equipment our country can provide,” he said.

The defense legislation includes $12.3 billion for the Pentagon’s Missile Defense Agency and orders a more rapid buildup of the nation’s missile defenses as Pyongyang has refused to back away from developing nuclear missiles capable of striking the United States.

The bill includes money for as many as 28 additional Ground-Based Interceptors, which are anti-missile missiles that would be launched from underground silos in Alaska in the event the U.S. decided to try to shoot down a North Korean missile heading toward the United States. The interceptors are designed to directly hit the enemy missile outside the Earth’s atmosphere, obliterating it by the force of impact.

Lawmakers also have required Defense Secretary Jim Mattis to develop a plan for increasing the overall number of so-called GBIs from 44 to 104. The bill also directs the Pentagon to procure more ship-based interceptors and missiles for the Terminal High Altitude Area Defense, or THAAD, a U.S. mobile anti-missile system.

North Korea’s U.N. ambassador, Ja Song Nam, said in a letter Monday to Secretary-General Antonio Gutteres, that the unprecedented deployment of three U.S. aircraft carrier groups “taking up a strike posture” around the Korean peninsula has made it impossible to predict when nuclear war will break out. The carriers are participating in joint naval exercises with South Korea.

“The large-scale nuclear war exercises and blackmails, which the U.S. staged for a whole year without a break in collaboration with its followers to stifle our republic, make one conclude that the option we have taken was the right one and we should go along the way to the last,” Ja’s letter reads.

The policy bill also grants U.S. troops a 2.4 percent pay raise, which is slightly higher than the wage increase the Pentagon had proposed.

Lawmakers also approved an increase of more than 20,000 active-duty and reserve troops from last year’s level. The Army gets the largest boost and will receive 7,500 more active-duty Army soldiers and 1,000 additional reserve troops.

The defense bill provides money for 90 F-35 Joint Strike Fighters, 20 more than Pres. Trump asked for, as well as 24 F/A-18 Super Hornet jet fighters, ten more than requested. The budget also includes three Littoral Combat Ships, two beyond the budget request. The ships are new to the fleet and operate in congested areas near the shore against small boats and mines.