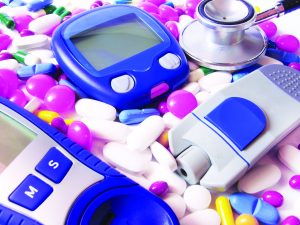 Over half a million Israelis suffer from diabetes, according to figures from the International Diabetes Federation, while another half million are pre-diabetic. The figures are based on data provided by the Health Ministry, reflecting the numbers of those suffering from the disease in 2012-2014.

Since 2006, diabetes has cost country NIS 10 billion, 20 percent of the total cost of all diseases to the Israeli economy since that time. Diabetes is the fourth biggest killer in Israel, Health Ministry figures show.

Most of the 550,000 Israelis, as well as the 500,000 who are pre-diabetic, suffer from Type II diabetes, which is generally connected to obesity and poor eating habits. The International Diabetes Federation study shows that 18 percent of Israeli adults are obese, while Health Ministry figures show that 37 percent are overweight. Taken together, the figures show that more than half of all Israeli adults are overweight or obese.

Also related to Type-II diabetes is sugar consumption. According to OECD figures, Israel adults were the world’s biggest consumers (by grams per person) of sugar, ingesting 160 grams of sugar (about 32 teaspoons) a day. The maximum recommended intake of sugar for adults is 9-11 teaspoons, according to the Health Ministry. Israelis are also among the top consumers of sugary drinks, with 41 percent of females and 45 percent of males drinking at least one sugary soft drink a day.