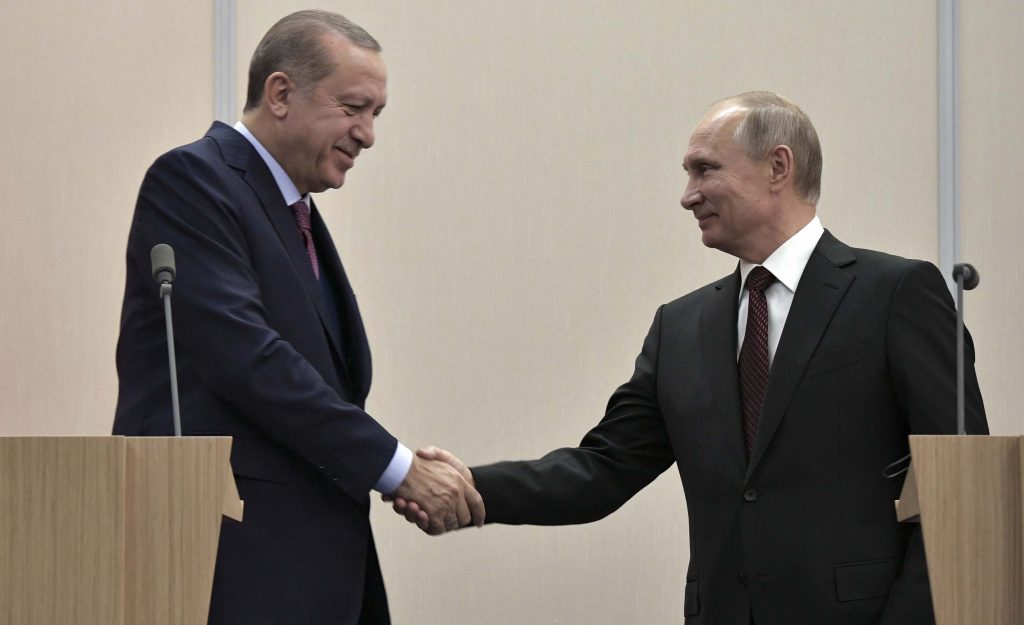 The leaders of Russia and Turkey discussed their next steps in Syria during talks Monday that underlined the close coordination between the two countries that have played key roles in the Syrian conflict.

The meeting was the sixth the two leaders have held this year, a pace that reflects the complexity of the situation in Syria, now in its seventh year.

Russia has backed Syrian President Bashar Assad, while Turkey has supported his foes. Moscow and Ankara found themselves on the verge of a direct conflict in 2015 when a Turkish jet shot down a Russian warplane on the Syrian border.

The two nations managed to mend the rift and, together with Iran, struck a deal earlier this year to create de-escalation zones that helped reduce fighting in Syria.

Putin’s discussions with Erdogan followed a weekend statement on Syria approved by Putin and President Donald Trump on the sidelines of an APEC summit in Vietnam. The statement affirmed the use of de-escalation zones and included a commitment to a peaceful solution governed by a Geneva peace process.

Putin said he briefed Erdogan on the U.S.-Russia statement and also told the Turkish leader about his talks with the Iranian leadership during a trip to Tehran earlier this month.

“Our joint work with Turkey and Iran has brought concrete results,” Putin said. “Violence has abated, and favorable conditions have been created for advancing an inter-Syrian dialogue under the U.N. auspices.”

He said relations between Russia and Turkey have reached a “new, strong level.”

The two countries’ cooperation on Syria helped restore bilateral trade and the flow of Russian tourists to Turkey, which were halted in the wake of the 2015 plane incident.

Putin said on Monday that relations between Moscow and Ankara have been “restored practically in full.”

Russia, however, has moved slowly to restore imports of Turkish fruit and vegetables, linking Turkey’s access to its market with other trade and economic issues.

The two countries have made progress on a new Russian natural gas pipeline to Turkey and a deal for Russia to build Turkey’s first nuclear power plant.

Erdogan also emphasized on Monday that Turkey is paying special attention to military cooperation with Russia. Turkey has signed a contract to buy Russia’s most advanced air defense missile system, the S-400, creating concern among some of Turkey’s NATO allies.