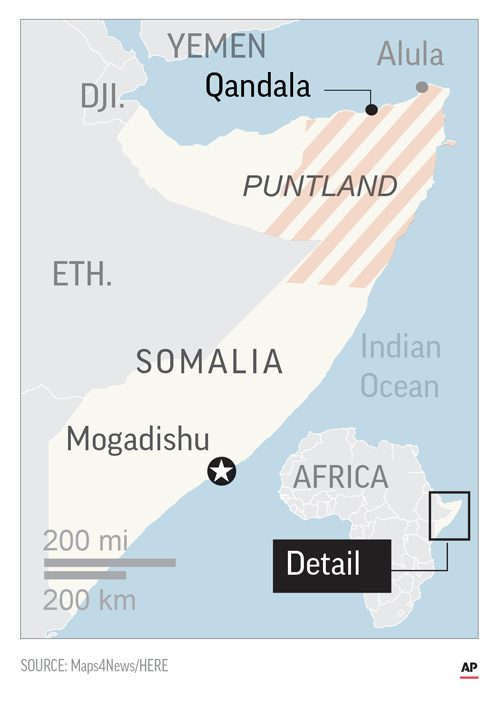 U.S. forces say they have carried out three drone strikes within 24 hours in Somalia, stepping up their campaign against terrorists from the al-Shabab and Islamic State groups.

The strikes by unmanned drones killed several terrorists, a spokeswoman for the U.S. military command in Africa told the Associated Press Sunday. With these three attacks, the U.S. has now carried out 26 attacks in Somalia against terror targets in 2017, she said.

The latest U.S. strikes were carried out in coordination with Somalia’s government, she said.

The first strike happened Saturday at approximately 4:30 p.m. local Somalia time and it killed one fighter for the extremists group, al-Shabab, said a U.S. Africa command statement. The strike occurred near Gaduud, about 250 miles southwest of the capital, Mogadishu, it said.

The U.S. strike came after al-Shabab attacked a convoy of U.S. and Somali forces, it said.

“We assess no civilians were anywhere near the site,” said the spokeswoman. “We take all measures during the targeting process to painstakingly ensure that civilian casualties and collateral damages are avoided and that we comply with the principles of the Law of Armed Conflict.”

The second strike occurred Sunday at approximately 3 a.m. against al-Shabab, in the Lower Shabelle region about 40 miles west of the capital Mogadishu.

Al-Shabab, the deadliest Islamic extremist group in Africa, has been blamed for the massive truck bombing in Mogadishu last month that killed more than 350 people. It was Somalia’s worst-ever attack and one of the world’s deadliest in years.

Al-Shabab has pledged allegiance to al-Qaida “and is dedicated to providing safe haven for terrorist attacks throughout the world,” said the spokeswoman, adding that al-Shabab “has publicly committed to planning and conducting attacks against the U.S. and our partners in the region.”

“U.S. forces will continue to use all authorized and appropriate measures to protect Americans and to disable terrorist threats,” said the spokeswoman. The U.S. forces are working with Somalia’s security forces and the 22,000-strong African Union force of soldiers from neighboring countries and they are “targeting terrorists, their training camps and safe havens throughout Somalia, the region and around the world,” she said.

The Trump administration earlier this year approved expanded military operations against extremists in this Horn of Africa nation.

Somalia’s president has vowed a “state of war” against the extremists but concern is growing that when the African Union force leaves Somalia, the national army will not be able to cope. The AU this week announced the beginning of its withdrawal from the long-chaotic and still heavily fractured nation, saying it will cut 1,000 troops by the end of the year. The AU pullout is set to be complete by the end of 2020.