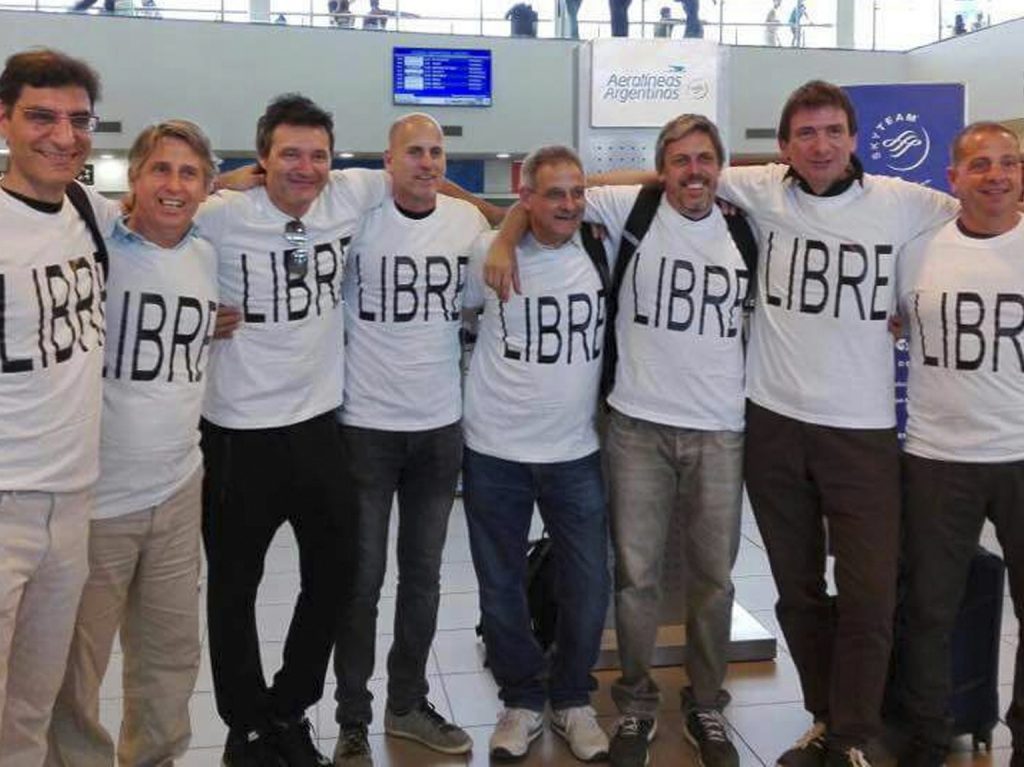 Argentina on Wednesday mourned five victims of the bike path attack near the World Trade Center, who were part of a group of friends celebrating the 30th anniversary of their high school graduation with a trip to New York City.

The victims were among eight friends marking their 1987 graduation from the Polytechnic School of Rosario, Argentina, with a U.S. trip to New York and Boston, near where one of their classmates lives.

In Rosario, a minute of silence was observed at the high school, and the light-blue and white Argentina flag was flown at half-staff. The school planned a candlelight vigil Wednesday evening.

“It hurts us to think … that these are people who walked the same school halls as we did or that studied in our same classrooms,” Agustin Riccardi, a senior at the school, told The Associated Press.

President Mauricio Macri said Wednesday that the attack, which killed eight people overall and seriously injured 11, “hit all Argentines hard,” that “there’s no place for gray areas” and that everyone must be committed from “head to toe” in the fight against terrorism.

“Five of the victims were from Rosario — young entrepreneurs, members of the city’s society. I imagine they had beautiful families,” Macri said during a public event in Buenos Aires.

Rosario, Argentina’s third-largest city, is an agricultural hub and the hometown of guerrilla leader Che Guevara.

Argentina’s consul in New York, Mateo Estreme, told La Capital newspaper in Rosario that the four survivors in the group are in a state of shock. Only days earlier, before flying to the U.S., they had posed for a group photo, all of them wearing T-shirts with the word “Libre,” or Free.

“Four died at the scene and another young man died when he was taken away by an ambulance,” Jose Nunez, a national deputy who was a friend of several of the men, told Argentina’s La Nacion newspaper.

The trip was paid for by Erlij, the chief executive of Ivanar, an Argentine steel products manufacturing company, according to La Nacion. Several other victims were architects.

The attack killed eight people and seriously injured 11. The deputy prime minister and foreign affairs minister of Belgium said in a tweet that one of the dead was Belgian.

He lives in the Chestnut Hill area of Newton, near Boston. Last week, he hosted a fundraiser for a local Republican candidate that was attended by Massachusetts Gov. Charlie Baker. Photos of Marro and his wife posing with Baker were posted to social media.

Tom Mountain, a local GOP official and Marro’s friend, attended the fundraiser at his home. He described Marro as “one of the nicest guys you’d ever want to meet” and said he is “very intertwined with the local Argentinian community.” Marro described his trip to New York as a routine social event with friends, he said.

“It was simply a matter of being in the wrong place at the wrong time,” Mountain said.

The Belgian town of Staden was in mourning, too. Ann-Laure Decadt, 31, the mother of two young sons, died in the attack.

Staden Mayor Francesco Vanderjeugd was initially thrilled to hear that her family was going to New York, only to be distraught when he heard Ann-Laure had died.

He had even sent a message to tell them what a great time they’ll have there, with the New York marathon and all.

“And then this happens,” he said.