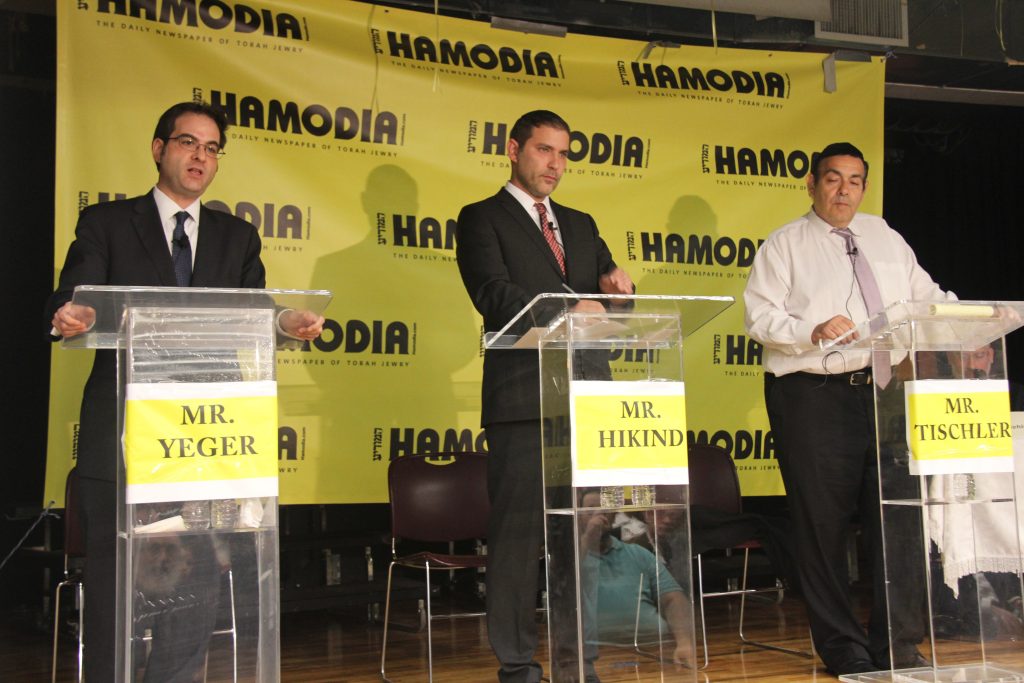 Hundreds of Boro Park residents filled the Golden Terrace hall of Bais Yaakov of Boro Park on Sunday night for a debate sponsored by Hamodia between candidates running for the 44th City Council seat. Participating in the debate were Mr. Kalman Yeger, running on the Democrat and Conservative party lines, Mr. Yoni Hikind, running as the Our Neighborhood Party candidate, and Mr. Heshy Tischler, running under the School Choice Party banner.

Dignitaries and high profile supporters were in attendance, as well as regular supporters who came to root for their candidate and undecided voters looking for clarity ahead of the upcoming election next week.

Well before the hall filled up ahead of the event’s beginning at 5 p.m., the candidates assumed their positions behind their podiums, exchanging friendly chatter among themselves as they braced themselves for the exchanges ahead.

Following introductory remarks by Rabbi Nachman Blasbalg, administrator of the Bais Yaakov in whose venue the event took place, the candidates were given two minutes each to introduce themselves to the attendees and the community at large. In their introductory remarks, as well as throughout the ensuing give and take, the candidates stressed the themes with which they wished to differentiate themselves and what their candidacies stood for: Mr. Kalman Yeger emphasized his experience in the political arena, Mr. Yoni Hikind talked about character and seeking to bring people together, and Mr. Heshy Tischler, who repeatedly elicited chuckles from the audiences as he elaborated on how, as a layperson, he is a communal address for problems of every kind.

A major, existential issue, raised during the first question and again throughout, was the progressive headwinds blowing in the city that threaten our community’s deep-seated values. Asked to answer how they, vying to be the de facto leader of the community to the rest of the city, would navigate these challenges even when the community’s positions aren’t “politically correct,” the candidates were in agreement that leadership was necessary, but each brought his unique style to bear.

Mr. Yeger began his answer by saying, “My view is that respect for everyone means respect for everyone, and that’s across the board, so when we’re asked to give tolerance or respect for any other community, that means that it has to come to us as well.” The proper approach, he argued, is therefore to treat others with respect, while stressing that our mesorah needs to be respected as well.

Further along, the candidates were asked to respond to the question of whether the government should be able to dictate the yeshivah curriculums, particularly secular studies. All candidates emphatically stressed their opposition to such government interference.

Other local issues raised included bring city funding for security to yeshivos with less than 300 students, which all candidates were in agreement on, the taxes they wouldn’t hesitate to raise — Yeger — a commuter tax, Hikind — none at the moment, Tischler — a car registration fee — and ideas they were all in agreement on, such as that city violations need to be backed up with photo evidence.

As the clock drew close to 7, the candidates offered their closing statements and the crowd dispersed with the knowledge that their vote this coming Tuesday will be a more educated one.