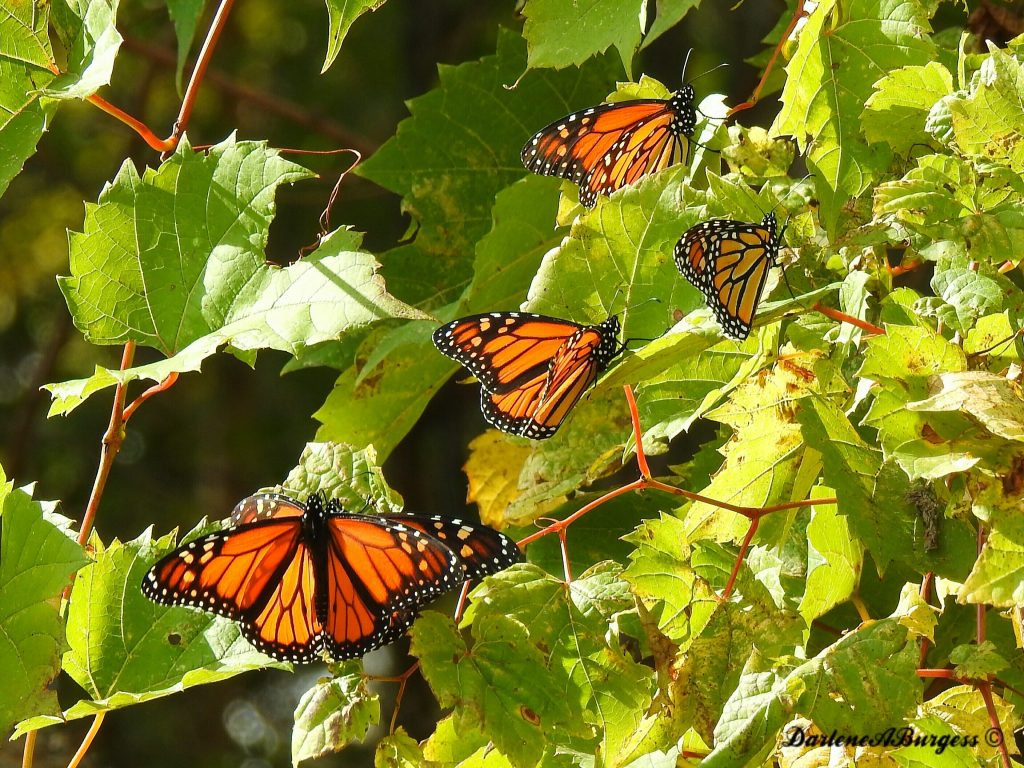 Monarch butterflies, those delicate symbols of spring and summer, should mostly be in Texas by now, winging their way to Mexico for the winter.

But Darlene Burgess keeps seeing colorful clusters of them — and she lives in Canada.

“As nice as this is to see, I really wish I wouldn’t see it because they’re running out of time,” said Burgess, who does evening monarch counts at Point Pelee National Park in Canada. “It’s really not good for them.”

It’s not just Canada. Swarms have been seen elsewhere, including near Cape May, New Jersey, at levels more normal for late September and early October.

Scientists say tens of thousands of the butterflies are likely to be stranded far north of where they’d normally be this time of year because of the unusually warm weather and strong winds that have kept them from migrating south, said biologist Elizabeth Howard, director of the monarch tracking non-profit Journey North.

Many of these butterflies might not even be alive if not for the warm weather. They are thought to be a sort of bonus generation — they were able to develop and emerge late in the season because it’s been so unusually warm.

Monarchs typically arrive in Mexico around Nov. 1. This many “stragglers” in Ontario and elsewhere is “definitely new territory for us,” said University of Kansas biology professor Chip Taylor, director of Monarch Watch.

Now they may be stuck because temperatures are starting to fall. Howard said their muscles don’t work when temperatures dip into the 50s. And if they don’t freeze, they are likely to starve to death because much of the plants they need to feed their long voyage south are already gone for the season, biologists said.

“What’s really important is they’ve got to get out of town,” Howard said.

Burgess counted hundreds of them Sunday, watched several of them fight the strong wind on Tuesday and fall into the waves of Lake Erie. She saw at least 50 on Thursday.

Karen Oberhauser, a biologist at the University of Wisconsin, saw a monarch on Oct. 20 in Madison, and sees some hope — for the butterflies if not for the planet. If not for the heat, some of these butterflies would have died as caterpillars, she noted, and some will beat the odds and make it to Mexico.

“It’s not an ominous sign for monarchs, but it is ominous,” Oberhauser said.

Monarchs have had some very lean years lately, and there is a petition to make them a threatened species. They are battling a dwindling food supply, especially milkweeds which are the only thing they eat when in the caterpillar stage, habitat loss, climate change and pesticides, Brower said.

Hopes that this would be a big bounce-back year have now dwindled. Taylor wouldn’t say it’s a good year, but it’s not as bad as some others, especially a horrible 2013-2014 season.

“Not all is lost,” Taylor said.