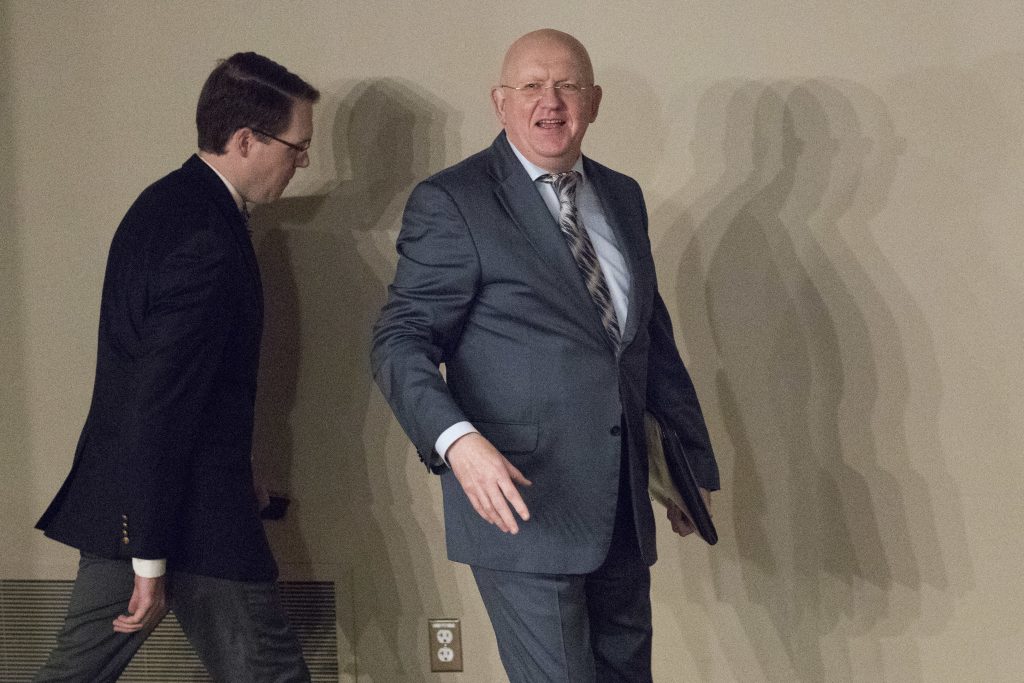 Russia on Tuesday vetoed a U.S.-sponsored resolution that would have extended the work of inspectors seeking to determine who is responsible for chemical weapons attacks in Syria, accusing the United States of calling the vote “to show up and dishonor Russia.”

Russia’s U.N. Ambassador Vassily Nebenzia tried unsuccessfully to postpone the vote until next month — after the joint body comprising investigators from the U.N. and the chemical weapons watchdog issues a report on Oct. 26 about the April 4th chemical attack in Khan Sheikhoun that killed over 90 people.

The resolution was then put to a vote and received 11 “yes” votes, 2 “no” votes from Russia and Bolivia, and two abstentions by China and Kazakhstan.

Nebenzia said Russia has criticized the Joint Investigative Mechanism, known as the JIM, but doesn’t want it terminated — it wants to amend its mandate which doesn’t end until Nov. 17.

U.S. Ambassador Nikki Haley, who is currently in Africa, pressed for a vote before the JIM report.

She said last week that Russia wanted first to see if the report blames Syria for the Khan Sheikhoun attack, in which case it would have no faith in the JIM. She called this position unacceptable.

“We can’t work like that,” Haley told reporters. “We can’t go and pick and choose who we want to be at fault, who we don’t.”

Nebenzia repeated and sharply criticized Haley’s comments, telling the council Tuesday that “we never, ever, ever put it in such a way.”

As for picking and choosing, the Russian ambassador said, “It’s not us who pick and choose, it’s you, the United States, you decided on the first day.”

The United States blamed the Syrian military for the attack in Khan Sheikhoun and launched a punitive strike days later on the Shayrat air base where it said the attack was launched. Syrian President Bashar Assad has denied using chemical weapons.

The attack in Khan Sheikhoun sparked outrage around the world as photos and video of the aftermath, including quivering children dying on camera, were widely broadcast.

A fact-finding mission by the chemical weapons watchdog, the Organization for the Prohibition of Chemical Weapons, reported on June 30 that sarin nerve gas was used in the Khan Sheikhoun attack. But the mission wasn’t authorized to determine responsibility. That job was given to the JIM.

Russia, a close ally of Syria, has repeatedly accused the United States and its Western allies of rushing to judgment and blaming the Syrian government for sarin use in Khan Sheikhoun. It has also criticized the June 30 report by the fact-finding mission as “very biased.”

Haley, the U.S. ambassador, said in a statement after the vote that “Russia has once again demonstrated it will do whatever it takes to ensure the barbaric Assad regime never faces consequences for its continued use of chemicals as weapons.”

“This is the ninth time Russia has protected Assad and his team of murderers by blocking the Security Council from acting,” she said. “In doing so, Russia once again sides with the dictators and terrorists who use these weapons.”