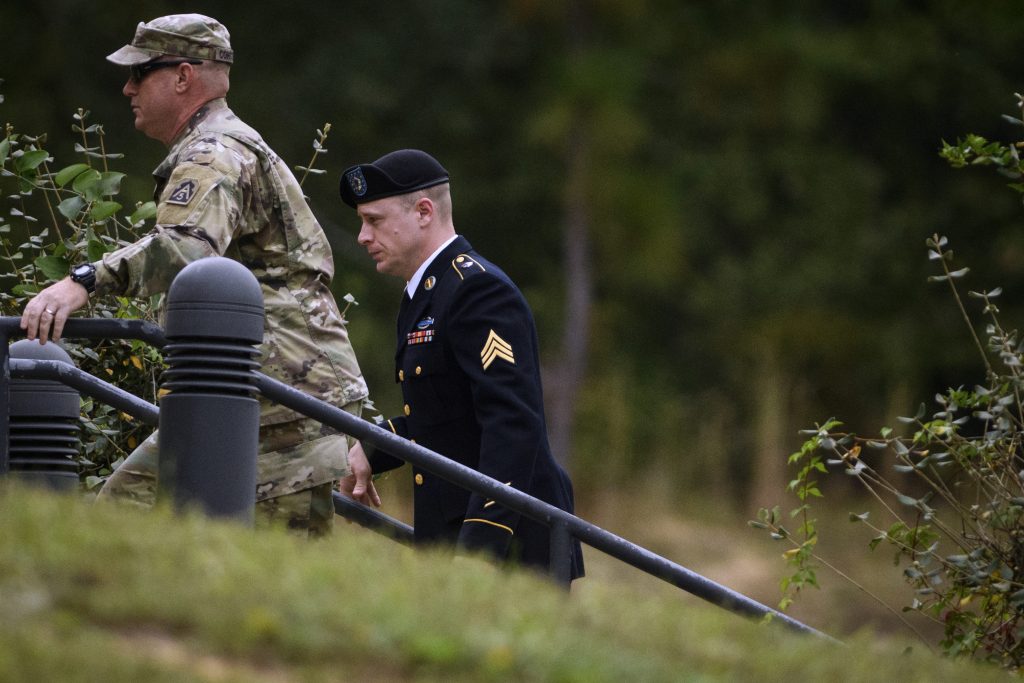 Army Sgt. Bowe Bergdahl, a Taliban captive for five years after abandoning his post in Afghanistan, pleaded guilty Monday to desertion and misbehavior-before-the-enemy charges that could put him in prison for life.

“I understand that leaving was against the law,” said Bergdahl, whose decision to walk off his remote post in Afghanistan in 2009 prompted intense search and recovery missions, during which some of his comrades were seriously wounded.

Bergdahl, 31, is accused of endangering his comrades by abandoning his post without authorization. He told a general after his release from five years in enemy hands that he did it with the intention of reaching other commanders and drawing attention to what he saw as problems with his unit.

The prosecution made no agreement to limit Bergdahl’s punishment in return for the soldier’s guilty pleas. The judge, Army Col. Judge Jeffery R. Nance, reminded Bergdahl that he could spend the rest of his life in prison, and asked him one last time if he wanted to plead guilty. “Yes,” Bergdahl replied, and the judge accepted the pleas.

Bergdahl may be hoping for leniency. Misbehavior carries a maximum penalty of life in prison, while desertion is punishable by up to five years.

“At the time, I had no intention of causing search and recovery operations,” Bergdahl said, but he added that now he does understand that his decision prompted efforts to find him.

The guilty pleas bring the highly politicized saga closer to an end eight years after Bergdahl vanished in Afghanistan. President Barack Obama, who approved the Taliban prisoner swap that brought Bergdahl home in 2014, said the U.S. does not leave its service members on the battlefield, but he was roundly criticized by Republicans.

Campaigning for president, Donald Trump repeatedly called Bergdahl a “dirty, rotten traitor” and suggested he deserved to be executed by firing squad or thrown out of a plane without a parachute. The defense said Mr. Trump unfairly swayed the case with this scathing criticism. The judge decided that Mr. Trump’s comments, though “disturbing and disappointing,” did not constitute unlawful command influence by the soon-to-be commander in chief.

Berghdahl’s sentencing hearing is scheduled to begin Oct. 23. His years as a captive of the Taliban and its allies could be factored into his punishment, but the hearing also will likely feature damning testimony from his fellow service members. The judge has ruled that a Navy SEAL who suffered a career-ending leg wound and an Army National Guard sergeant whose head wound put him in a wheel chair would not have been hurt in firefights had they not been searching for Bergdahl.

Bergdahl, who’s from Hailey, Idaho, has been assigned to desk duty at a Texas Army base while his case unfolds.