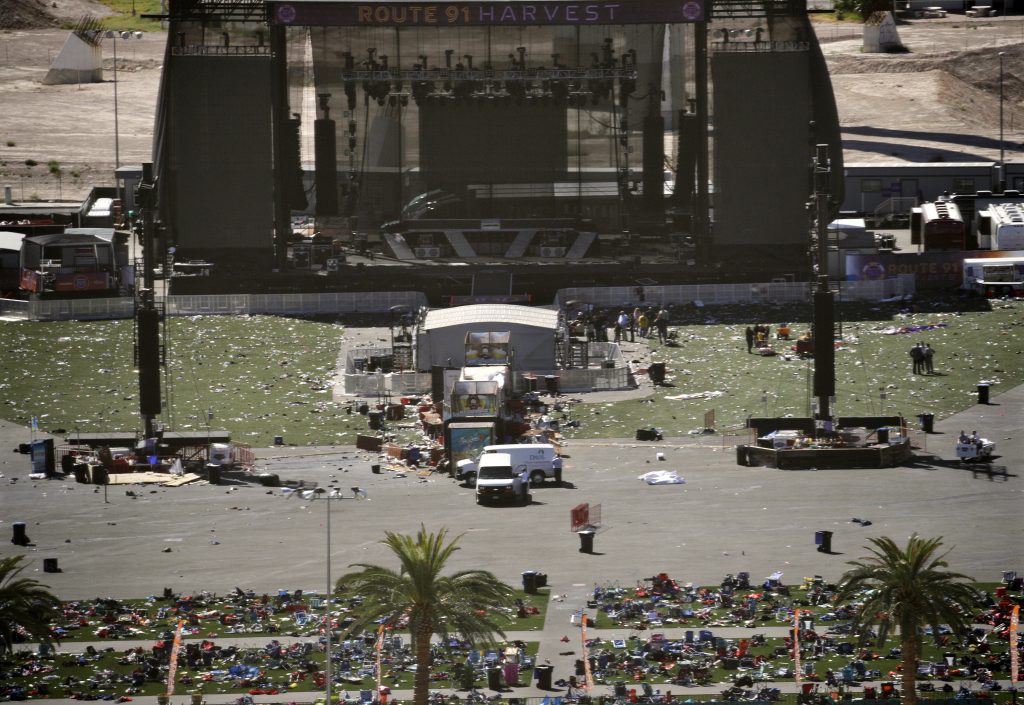 A 64-year-old man with multiple machine guns rained down gunfire from the 32nd floor of a Las Vegas hotel on a country music festival on Sunday, slaughtering at least 59 people in the deadliest mass shooting in modern U.S. history before killing himself.

The barrage of bullets from the Mandalay Bay hotel into a crowd of 22,000 people lasted several minutes, sparking panic.

The crowd, funneled tightly into a wide-open space, had little cover and no easy way to escape. Some victims fell to the ground, while others fled in panic. Some hid behind concession stands. Others crawled under parked cars.

Some of the injured were hit by shrapnel. Others were trampled in the mass panic.

The shooter appeared to fire unhindered for more than 10 minutes as Las Vegas police frantically tried to locate the man in one of the Mandalay Bay hotel towers, according to radio traffic. For several minutes, officers could not tell whether the fire was coming from Mandalay Bay or the neighboring Luxor hotel.

Police on Monday identified the gunman as Stephen Paddock, who lived in Mesquite, Nevada. He lived in a retirement community, owned rental properties, held a private pilot’s license and liked to travel to Las Vegas.

They said they believed he acted alone and did not know why he attacked the crowd. The Islamic State claimed responsibility for the massacre, but U.S. officials said there was no evidence of that.

The preliminary death toll, which officials said could rise, eclipsed last year’s massacre of 49 people at an Orlando, Florida venue by a terrorist who pledged allegiance to Islamic State.

Police said Paddock had no criminal record. The gunman killed himself before police entered the hotel room he was firing from, Lombardo told reporters.

“We have no idea what his belief system was,” Lombardo said. “I can’t get into the mind of a psychopath.”

Federal officials said there was no evidence to link Paddock to terrorist organizations.

“We have determined to this point no connection with an international terrorist group,” Aaron Rouse, the Federal Bureau of Investigation’s special agent in charge in Las Vegas, told reporters.

U.S. officials discounted the claim of responsibility for the attack made by Islamic State in a statement.

“We advise caution on jumping to conclusions before the facts are in,” CIA spokesman Jonathan Liu said in an email.

The Islamic State has been known to make unsubstantiated claims of responsibility for attacks around the world.

Lombardo said there were more than 10 rifles in the room where Paddock killed himself.

The shooting, just the latest in a string that have played out across the United States over recent years, sparked an outcry from some lawmakers about the pervasiveness of guns in the United States, but was unlikely to prompt action in Congress.

Efforts to pass federal laws on guns failed following mass shootings from the 2012 massacre of 26 young children and educators in Newtown, Connecticut, to the June attack on Republican lawmakers practicing for a charity baseball game.

Nevada has some of the nation’s most permissive gun laws. It does not require firearm owners to obtain licenses or register their guns.

“To all those political opportunists who are seizing on the tragedy in Las Vegas to call for more gun regs. … You can’t regulate evil,” Kentucky’s Republican Governor, Matt Bevin, said on Twitter.

Hospital emergency rooms were jammed with the wounded. Rep. Ruben Kihuen, a Democrat whose congressional district includes part of Las Vegas, visited a hospital and said: “Literally, every single bed was being used, every single hallway was being used. Every single person there was trying to save a life.”

Las Vegas authorities put out a call for blood donations and set up a hotline to report missing people and speed the identification of the dead and wounded. They also opened a “family reunification center” for people to find loved ones.

In its claim of responsibility, the Islamic State group said the gunman was “a soldier” who had converted to Islam months ago. But it provided no evidence.

Trump said he would travel to Las Vegas on Wednesday to meet with victims, their family members and first responders.

“It was an act of pure evil,” said Trump, who later led a moment of silence at the White House in honor of the victims.

The suspected shooter’s brother, Eric Paddock, said the family was stunned by the news.

“We’re horrified. We’re bewildered, and our condolences go out to the victims,” Eric Paddock said in a phone interview, his voice trembling. “We have no idea in the world.”

He said his brother belonged to no political or religious organizations, and had no history of mental illness. Their father had been a bank robber who for a while was listed on the FBI’s “Ten Most Wanted” suspects list.

Video of the attack showed panicked crowds fleeing as sustained rapid gunfire ripped through the area.

“People were just dropping to the ground. It just kept going on,” said Steve Smith, a 45-year-old visitor from Phoenix, Arizona. He said the gunfire went on for an extended period of time.

“Probably 100 shots at a time,” Smith said. “It would sound like it was reloading and then it would go again.”

Las Vegas Mayor Carolyn Goodman said the Sunday night attack was the work of a “crazed lunatic full of hate.”

Interstate 15 was briefly closed, and flights at McCarran International Airport were suspended for a while.

Las Vegas draws some 3.5 million visitors from around the world each year and the area was packed with visitors when the shooting broke out shortly after 10 p.m. local time.

Mike McGarry, a financial adviser from Philadelphia, was at the concert when he heard hundreds of shots ring out.

“It was crazy. I laid on top of the kids. They’re 20. I’m 53. I lived a good life,” McGarry said. The back of his shirt bore footmarks, after people ran over him in the panicked crowd.