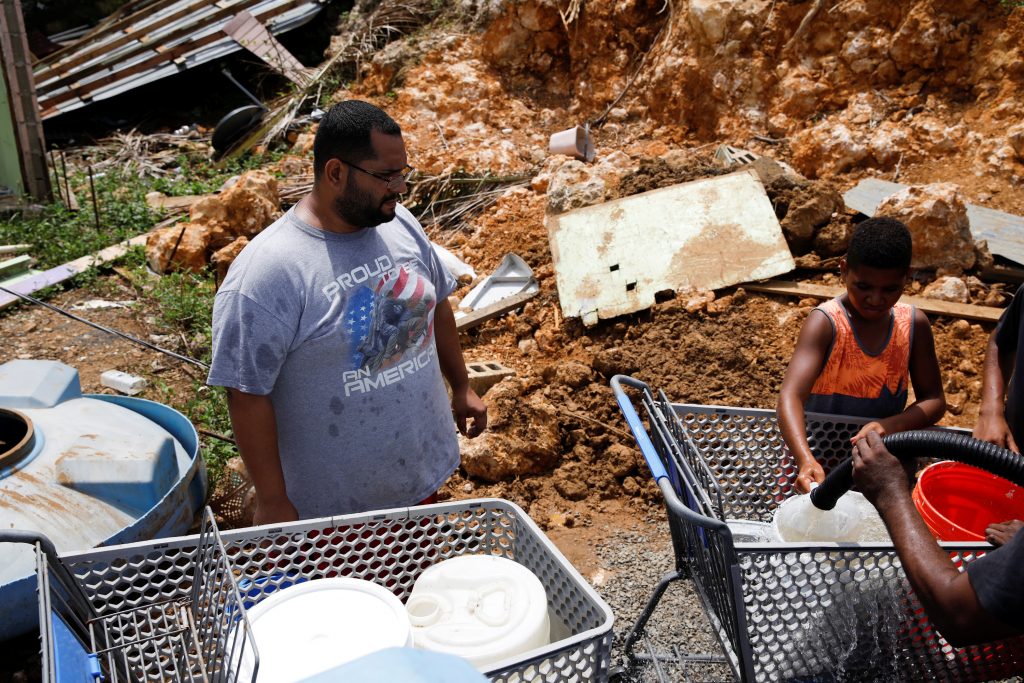 Puerto Rican officials pressed the Trump administration on Wednesday to lift a ban on foreign shipping between American ports as the U.S. island territory struggled with fuel, water and medical supply shortages one week after Hurricane Maria struck.

Even as federal emergency management authorities and the U.S. military stepped up relief efforts, many residents on the island of 3.4 million people voiced exasperation at the prolonged lack of electricity, reliable drinking supplies and other essentials.

Maria, the most powerful hurricane to hit Puerto Rico in nearly 90 years, swept across the island last Wednesday with roof-ripping winds, knocking out the territory’s entire power grid, unleashing severe flooding and causing widespread heavy damage to homes and infrastructure.

Medical experts said they were concerned about a looming public health crisis posed by the island’s crippled water and sewage treatment system. The delivery of relief supplies has been complicated by disruption of telephone service and roads still damaged by flooding or left impassable by fallen trees and debris.

Desperate residents have waited hours in long lines for deliveries of diesel fuel to power generators and gasoline to fill empty automobile tanks. Some water-supply trucks have been mobbed.

Rossello has strongly praised the response of President Donald Trump, defending the Republican administration against complaints of being slow to act and showing too little concern.

On Wednesday the governor and others pushed the president to temporarily waive the Jones Act, a law requiring that all goods shipped between U.S. ports be carried by U.S. owned-and-operated vessels.

Administration officials on Tuesday balked at the idea, saying there was sufficient shipping capacity for emergency deliveries to Puerto Rico in the U.S. merchant fleet, but Mr. Trump said on Wednesday that a waiver was under consideration.

Puerto Rico typically gets most of its fuel by ship from the United States, but one of its two main ports is closed and the other is operating only during the daytime.

“We expect them to waive it (the Jones Act),” Rossello told CNN on Wednesday, noting there was a brief waiver issued after Hurricane Irma, which was much less devastating as it grazed past the island en route to Florida earlier this month.

Members of Congress from both parties have supported an emergency waiver, he said.

The U.S. government has issued periodic Jones Act waivers following severe storms in the past.

The Department of Homeland Security, which waived the law after Irma and also following Hurricane Harvey’s devastating landfall in Texas in August, said on Wednesday it was considering a request by members of Congress for a waiver.

Growing frustration levels were evident among throngs of island residents struggling on a daily basis to cope without basic necessities.

On Tuesday, hundreds of people crowded around a government water tanker in the northeastern municipality of Canovanas, some 15 miles east of the capital San Juan, with containers of every size and shape after a wait that for many had lasted days.

“I know there can be more help,” said Juan Cruz as he filled a container. Residents there said it was the first such truck to visit their neighborhood since the hurricane struck.

“We can use more help,” Cruz said. “We are U.S. citizens. We are supposed to be treated equally.”

U.S. Air Force Colonel Michael Valle, on hand for relief efforts in San Juan, said he was most concerned about “the level of desperation” that could arise if fuel distribution did not return to normal within a couple of weeks.

“They say that it is coming from the United States, but who are they giving it to because I haven’t received any at my house?” Velasquez asked. “No one has knocked on my door and said, ‘Here is some rice.'”

The U.S. Federal Emergency Management Agency (FEMA) said by Wednesday that it had delivered more than 4.4 million meals and 6.5 million liters of water in Puerto Rico and the U.S. Virgin Islands since Maria ravaged the Caribbean.

In Washington, Republican leaders who control both chambers of Congress have said they are prepared to boost disaster funding, but are waiting for a detailed request from the Trump administration.

In the meantime, the administration still has $5 billion in aid in a disaster-relief fund, and Congress has also approved about $7 billion more that will become available on Oct. 1.