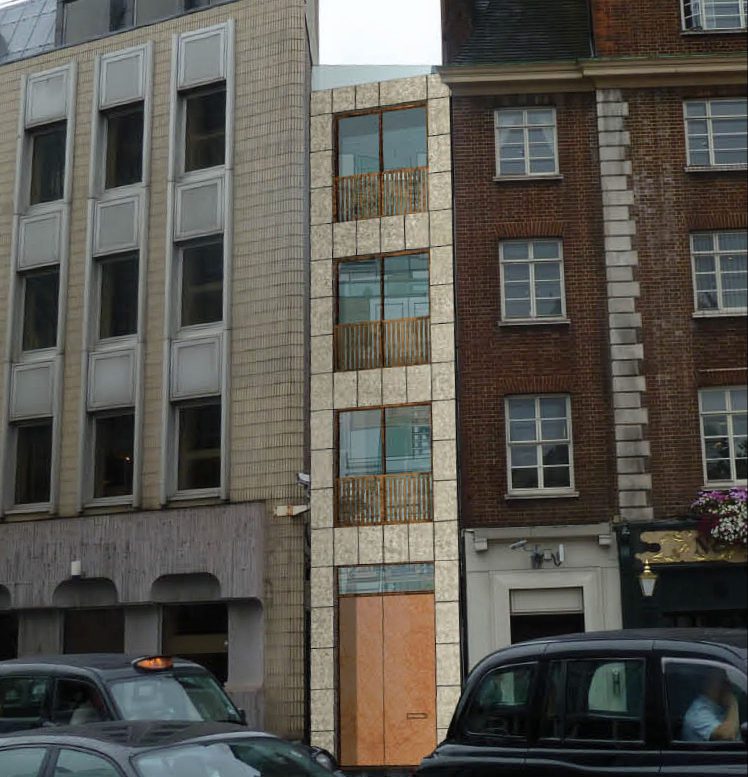 Skinny house. Doesn’t quite sound like a property that would fetch a high price, but the one slated to be built on Euston Road in London has a market projection of 2.7 million British pounds. For a 1,500 square foot (139 m2) structure, that’s not exactly a bargain, is it? Taking into account the current price per square foot, that’s about a million dollars more than what a similar size property would cost in Manhattan! Of course, the developers, Bolsover Street and HOK architects, are promising to make this a luxury unit, so perhaps that can account for the obscene price tag. After all, why not affix 24k gold faucets in the bathroom? But what really threw me for a loop over here is the location. It’s going to be sandwiched between two buildings such that, aside from the fact that windows will be a possibility from only two sides, the entire width of the house will stand at a grand total of 10 feet (about 3 meters)! Ah, the luxury! But go figure.

Of course, one of the neighbors is not so happy that the narrow service road is going to be converted into a cozying up wall-partner, but Westminster Council overruled the Green Man Pub owner and gave Bolsover et al. permission to proceed. Now, what I cannot help wondering is how long it took someone to come up with this idea. I mean, just imagine. In all likelihood, businessmen of all stripes passed by this little alley day after day, for who knows how many years, until, finally, someone said, “Hey! Why don’t we build here!” The lightbulb moment.

And, in a flash, a basically worthless piece of no-man’s-land becomes a big potential moneymaker.

All sarcasm aside, there really is a point to ponder here. We all have “dead-space” real estate in our lives. Or so we think. You know, those minutes here and there that get squandered simply because they’re sandwiched in between the “big” things and just aren’t big enough to fill up with anything meaningful. But here’s a story for you. More inspiring, I hope, than the fat-cat skinny house. It’s a story told about many a Gadol (and likely true about them all!), but I most recently saw it attributed to Harav Zelig Reuven Bengis, zt”l, who was appointed Rav Av Beis Din of the Eidah Hachareidis in Yerushalayim in the year 1937, and then, following the passing of Harav Yosef Tzvi Dushinsky, zt”l, as Gaon Av Beis Din in 1948; a position he maintained until his own passing in 1953.

Siyumim were not an unfamiliar occurrence in Rav Bengis’ home. However, on a particular occasion, he made a much bigger to-do of it than usual. “This siyum,” explained Rav Bengis to the close friends and associates he invited, “is special. When I married, I did not seek out a position in the rabbinate for fear of the encroachment it would inevitably impose on my time for Torah study.” For eight years, Rav Bengis enjoyed the complete support of his father-in-law, Harav Chaim Tzvi Broide of Nemoksht, and was thus free to totally immerse himself in the Yam HaTalmud. “Even when I was forced to accept a rabbinical post,” Rav Bengis continued, “I tried to make sure it would always be in small communities which would afford me the most freedom to learn. Here in Yerushalayim, though, I have no choice but to attend many functions that take up an enormous amount of time. However, there are inevitably a few minutes here and there that otherwise go to waste. For example, one arrives at a chasunah and the baalei simchah are not quite ready to proceed to the chuppah. Rather than allow those precious moments to slip away, I decided to use them as a special seder of learning Shas from beginning to end. Over time, those minutes added up until they amounted, on their own, to sufficient time for me to complete Shas. That’s what this siyum is for.”

There is an expression, “Time is money.” But, really, time is life. For what is life other than the amount of time that we are allotted to live in this world? It certainly is no easy task to maximize the wasted “dead-space” pieces of our time real-estate, and most people will probably not manage to fill them with the type of hasmadah exemplified by Rav Bengis and other Gedolei Yisrael. But, that doesn’t mean that we can’t try.

For example, think about this. A man is very thirsty. His lips are parched, his tongue is practically sticking to his palate, and his throat feels like sandpaper. Enter you with a glass of cold milk. A big mitzvah, right? Tremendous chessed, no? Well, Chazal tell us that when you give someone a smile, you are doing more for that person than what you do for the impossibly thirsty man by giving him a glass of cold milk! So, you’re at home, and it’s one of those “in between” times. Not quite time for supper. No kids need to be put to bed. There’s no chore to take care of. And there’s also not enough time to make a business call or, so you feel, even to open up a sefer and learn a little something with one of your kids. But your three-year-old happens to be playing right next to you. So why not give him a smile? Or perhaps even a good word. “Wow, Shlomie, I really like the way you arranged those trucks! It looks like so much fun.” Call it the skinny moment, if you will, but look how much you can fit into that skinny little moment!