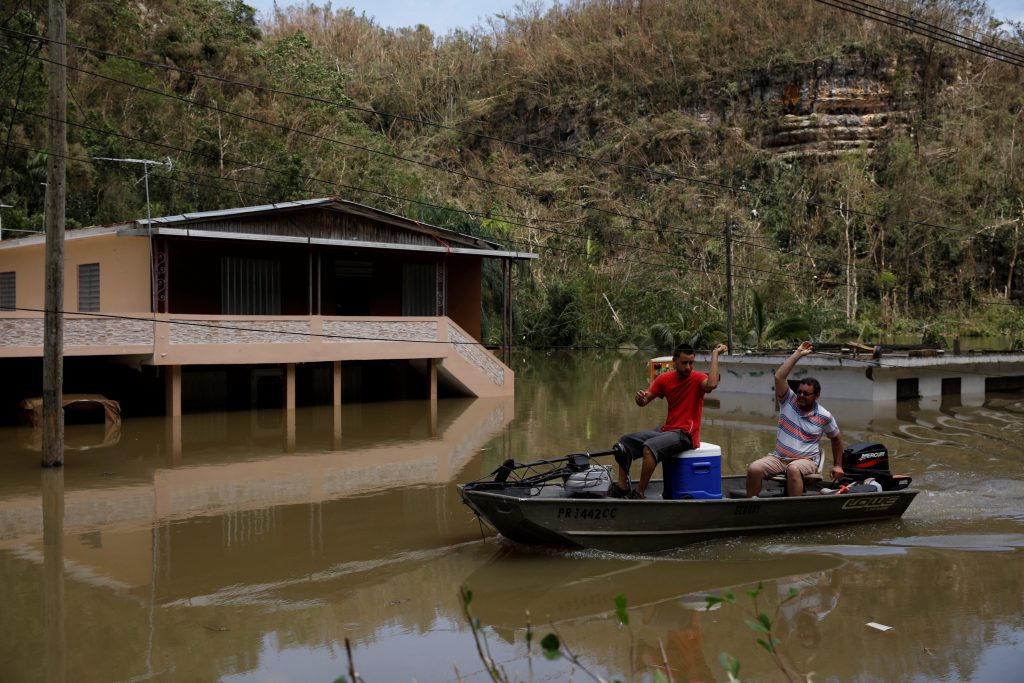 Many people living near a crumbling dam in storm-battered Puerto Rico have evacuated, Governor Ricardo Rossello said on Monday, as he asked for more government aid to avert a humanitarian crisis after Hurricane Maria.

Much of the Caribbean island, a U.S. territory with a population of 3.4 million, is still without electricity five days after Maria struck with ferocious winds and torrential rains, the most powerful hurricane to hit Puerto Rico in nearly a century.

There have been growing concerns for some 70,000 people who live in the river valley below the Guajataca Dam in the island’s northwest, where cracks were seen on Friday in the 88-year-old earthen structure.

Rossello said he was working on the assumption that the 120-foot dam would collapse.

“I’d rather be wrong on that front than doing nothing and having that fail and costing people lives,” he said in an interview with CNN. “Most of the people in the near vicinity have evacuated.”

It was unclear if the governor was saying that most of the 70,000 valley inhabitants had left the area, or only the several hundred people living in the small towns closest to the dam. About 320 people from those towns have moved to safety, according to local media.

The fear of a potentially catastrophic dam break added to the immense task facing disaster-relief authorities after Maria, which was the second major hurricane to strike the Caribbean this month. The storm killed at least 29 people in the region, at least 10 of those in Puerto Rico, which was already battling an economic crisis.

Rossello said that before the storms struck, he had been embarking on an aggressive fiscal agenda that included more than $1.5 billion in cuts.

“This is a game changer,” he told CNN. “This is a completely different set of circumstances. This needs to be taken into consideration otherwise there will be a humanitarian crisis.”

Brock Long, administrator of the Federal Emergency Management Agency (FEMA), and Tom Bossert, senior adviser to the Department of Homeland Security, met with Rossello on Monday.

White House spokeswoman Sarah Sanders told reporters in Washington that the administration was engaged in a fact-finding process to figure out how much help Puerto Rico needs.

“The federal response has been anything but slow,” Sanders said at the daily briefing. “In fact, there’s been an unprecedented push through of billions of dollars in federal assistance that the administration has fought for.”

Many structures on Puerto Rico, including hospitals, remain badly damaged and flooded, with clean drinking water hard to find in some areas. Few planes have been able to land or take off from damaged airports.

The storm has also put a big strain on PREPA, the island’s electricity utility, which declared bankruptcy in July after accumulating a $9 billion debt and years of underinvestment.

From preliminary FEMA reports, it is estimated that 55 percent of transmission towers may be down, and that more than 90 percent of the distribution system could have been destroyed.

More than 91 percent of Puerto Rico’s cellphone sites are also out of service, the Federal Communications Commission said.

There are more than 10,000 federal staff, including more than 700 people from FEMA, doing recovery work in Puerto Rico and the U.S. Virgin Islands, according to FEMA.

The National Weather Service warned of further flash floods in the west of the island on Monday as thunderstorms moved in.

Maria would likely be downgraded from a hurricane to a tropical storm on Tuesday night, the National Hurricane Center said. As of 2 p.m. EDT on Monday, the center said, it was about 300 miles south-southeast of Cape Hatteras, North Carolina, heading slowly north.

The storm was unlikely to hit the continental United States directly, but the NHC said large swells were affecting the U.S. East Coast. A tropical storm warning was in effect for much of the North Carolina coast and officials issued a mandatory evacuation order for visitors to Ocracoke Island in the Outer Banks that went into effect at 5 a.m. EDT on Monday.