National Far-Right Gathering in Berkeley Is Called Off
National 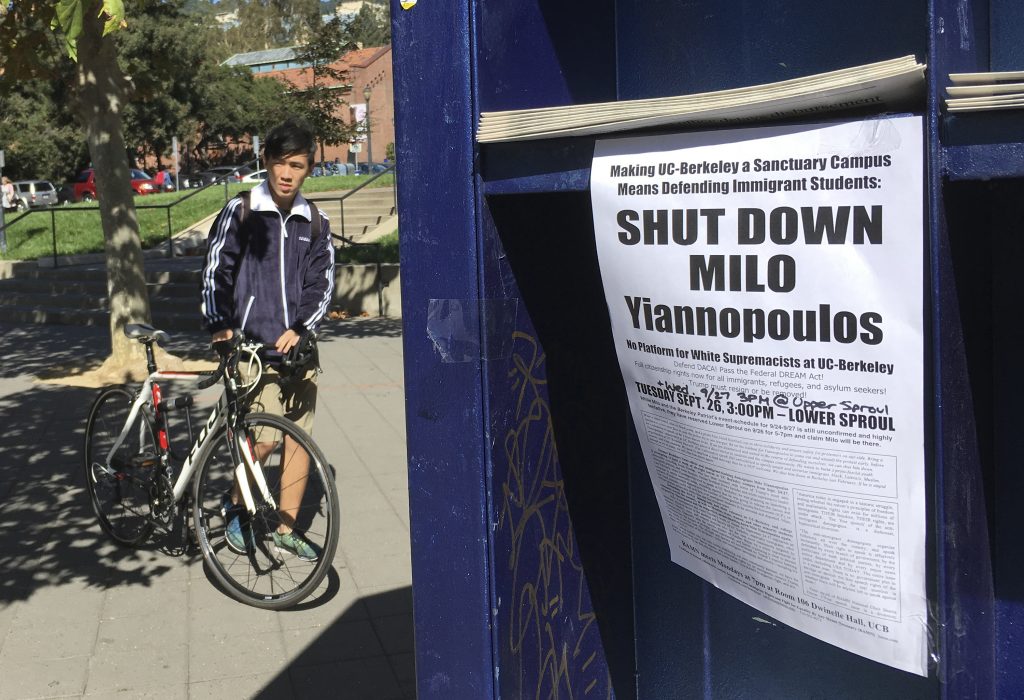 Organizers of a far-right event planned for the campus of the University of California, Berkeley, have told the school that all of the events scheduled for the coming week have been canceled, officials said Saturday.

Representatives of the student group Berkeley Patriot informed the university that Free Speech Week, which was scheduled to begin Sunday, will not take place, Dan Mogulof, a campus spokesman, said in a statement. No reason was given for the cancellation.

“It is extremely unfortunate that this announcement was made at the last minute, even as the university was in the process of spending significant sums of money and preparing for substantial disruption of campus life in order to provide the needed security for these events,” Mogulof said.

Some speakers scheduled to appear at the event had announced they would not attend.

A previously scheduled counterdemonstration was held Saturday with about 500 participants. That event, called “No Hate in the Bay: March Against White Supremacy,” was sponsored by several groups, including labor unions and human-rights organizations.

Yiannopoulos had planned a news conference Saturday, but it was canceled.

Yiannopoulos took to social media to decry the cancellation of the speaker series and announce a rally at the Mario Savio Steps on Sproul Plaza at noon Sunday.

“We are unable to host an official UC Berkeley speaking event,” Yiannopoulos said. “So we’re going to host an unofficial one.”

Yiannopoulos, who was forced to resign from the conservative Breitbart News website after making incendiary comments, also addressed media reports that his organization never intended to go through with the week’s activities. Lucian Wintrich, a writer for a website that has published conspiracy theories on such topics as Hillary Clinton’s health, was on the university’s list of confirmed speakers released Wednesday. However, Wintrich also pulled out of the event, citing in a blog post “the seemingly likely chance that something impedes the event.”

Wintrich said in an interview that he didn’t want college students to “waste their money” coming to the event.

In a Saturday email to a UC university administrator, obtained by The Los Angeles Times, Wintrich said Yiannopoulos had known for some time he was going to cancel the event.

“It was known that they didn’t intend to actually go through with it last week, and completely decided on Wednesday,” Wintrich wrote.

Yiannopoulos said that was not true, but he did appear to take some responsibility for the now-canceled event’s chaotic and disorganized organization.

Yiannopoulos said several high-profile speakers would attend the festival, but one of the names on the list — conservative commentator Ann Coulter — said Friday that she had not in fact planned to speak there.

“I never planned to speak (at Free Speech Week),” she said in an email Friday. “My speakers bureau never booked me to speak at Berkeley. No contract for me to speak existed.”

Coulter had been scheduled to speak on campus earlier this year, but that engagement was scrapped at the last minute.

The university has incurred at least $1.4 million in security costs since February, when Yiannopoulos’ last appearance sparked violent protests. The campus spent $200,000 on security for that event, $600,000 for Coulter, whose event was canceled, and an estimated $600,000 for the talk last week by conservative writer Ben Shapiro, according to the university.

Officials shut down a large portion of Berkeley’s campus as well as three city blocks to prevent the kind of rioting that happened when Yiannopoulos’ February event was canceled. The protests outside Shapiro’s talk were relatively subdued with no widespread violence and nine arrests.