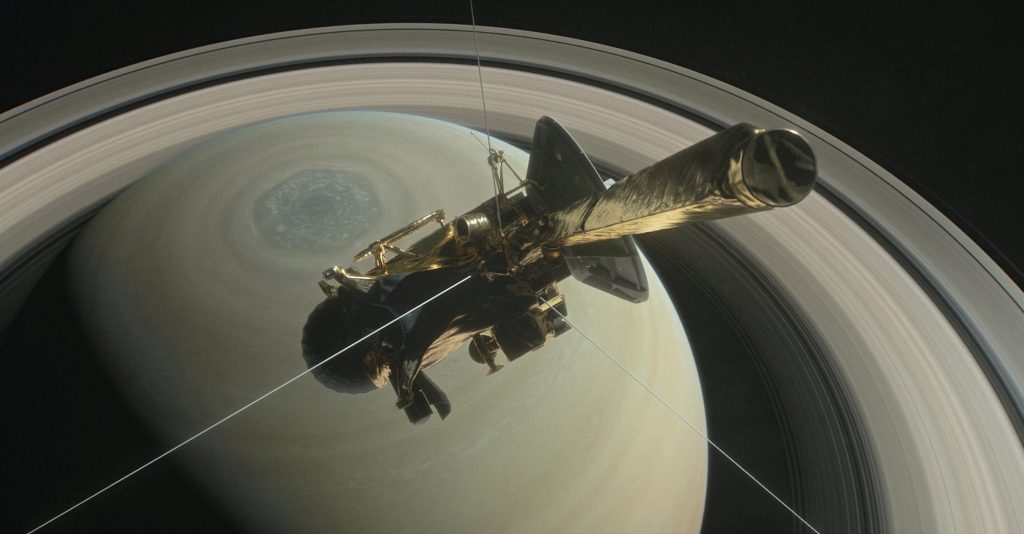 The U.S. space agency NASA received a final signal from its Cassini spacecraft on Friday as it ended a groundbreaking, 13-year Saturn mission with a meteor-like plunge into the ringed planet’s atmosphere.

Cassini, the first spacecraft to orbit Saturn, entered the gaseous giant’s crushing atmosphere at 7:55 a.m. ET at about 70,000 miles per hour, the National Aeronautics and Space Administration said.

“This morning a lone explorer – a machine made by human-kind – finished its mission 900 million miles away,” Cassini project manager Earl Maize said at a news conference on Friday at NASA’s Jet Propulsion Laboratory in Pasadena, California. “We believe we got every last second of data.”

The end of Cassini’s voyage, which began with its launch in 1997 and a seven-year journey to Saturn, was met with applause, hugs and tears from NASA officials after its final transmission was received, according to video footage on the space agency’s website.

Officials at the news conference displayed the last set of images Cassini captured of Saturn as it crashed into the planet. The planet’s lakes and seas near its north pole were visible, along with detailed views of gaps in its massive rings.

Maize said Cassini’s data, sent until the final fiery moment, was already being studied by NASA analysts in Arizona.

The transmissions are expected to include unprecedented data from the atmosphere’s upper fringe, about 1,190 miles above Saturn’s cloudtops. The data took 84 minutes to reach NASA antennas in Canberra, Australia, Maize said.

The final dive ended a mission that gave scientists a ringside seat to the sixth planet from the sun. The spacecraft’s discoveries included seasonal changes on Saturn, a hexagon-shaped pattern on its north pole and the moon Titan’s resemblance to Earth.

Cassini also found a global ocean on the moon Enceladus, with ice plumes spouting from its surface. Enceladus has become a promising lead in the search for places outside Earth that could support life.

The spacecraft has produced 450,000 images and 635 gigabytes of data since it began probing Saturn and its 62 known moons in July 2004.

Cassini, a cooperative project between NASA, the European Space Agency and the Italian Space Agency, was launched into space in October 1997 from Cape Canaveral in Florida.

With the spacecraft running low on fuel, NASA crashed it into Saturn to avoid any chance of it someday colliding with and contaminating Titan, Enceladus or another moon that has the potential for indigenous microbial life.

Cassini started a series of 22 orbital dives in April, using Titan’s gravity to slingshot itself into the unexplored area between the planet and its rings. The spacecraft studied Saturn’s atmosphere and took measurements to determine the size of the planet’s rocky core.

“Farewell Cassini, how far you’ve come,” astrophysicist Neil deGrasse Tyson tweeted. “On this eve, in fiery death, Saturn & you are one. VIP (Vaporize In Peace): 2004-2017.”