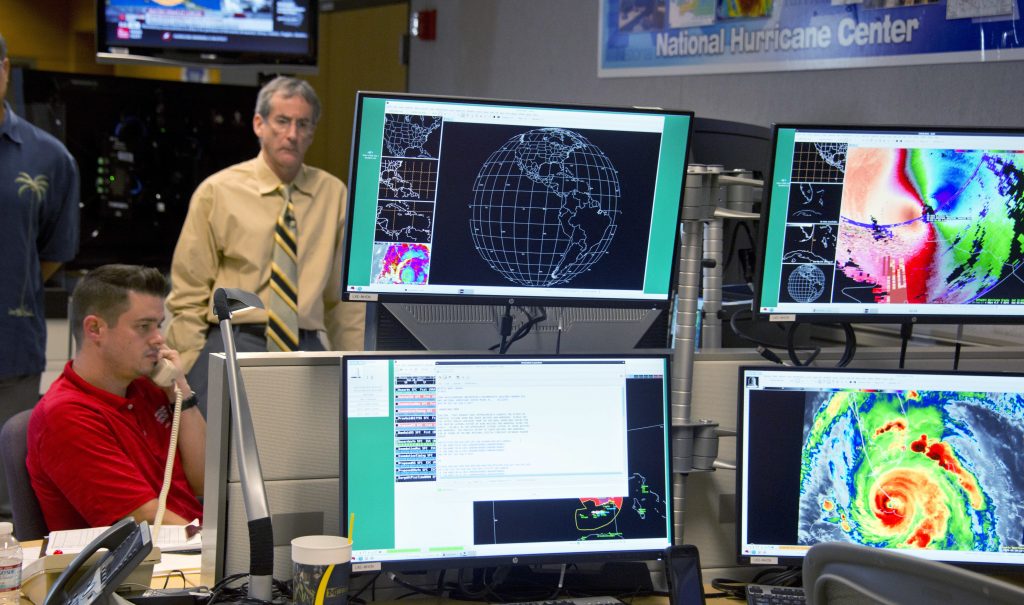 The latest forecast from the National Weather Service on Saturday say Irma could continue to have hurricane-force winds well into Georgia and Alabama after traveling up the Gulf coast and sweeping over the Florida panhandle. Hurricane warnings were issued for several southern counties, with tropical storm warnings for other sections to the north.

Forecasters warned that buildings could be damaged and said tornadoes could spin off as the extremely wide tropical system moves beyond Florida on Monday and early Tuesday.

All 100 miles (160 kilometers) of the Georgia coast was placed under a tropical storm warning as well as a hurricane watch Saturday. So was a portion of coastal South Carolina from the Georgia line to Edisto Beach, about 40 miles (65 kilometers) southwest of Charleston.

Georgia’s coast hasn’t suffered a direct landfall from a major hurricane since 1898, and Irma looked unlikely to snap that streak. The National Hurricane Center predicted the storm’s center would arrive inland in southern Georgia heading northward through the state Monday after churning up the west coast of Florida.

Gov. Nathan Deal’s order for nearly 540,000 people to evacuate Georgia’s six coastal counties took effect Saturday, with authorities turning all lanes of I-16 into one-way routes leading westward out of Savannah. Traffic out of the city was light, however, and the governor ordered the interstate returned to normal after just eight hours.

Many had already left Savannah by Saturday, when most businesses were closed and a smattering of homes and storefronts had plywood covering their windows.

Terry Boykin said most of her neighbors on Whitemarsh Island, just east of Savannah, had fled early. Boykin and her three grandsons packed her SUV early Saturday with small suitcases, three coolers filled with food from their refrigerator and a propane grill. They planned to stay with Boykin’s daughter in Statesboro, about an hour’s drive to the west.

“You don’t know what’s going to happen,” Boykin said, who evacuated last October when Hurricane Matthew brushed the Georgia coast. “We’ve had so many storms that look like they’re coming straight at us, and they miss us every time. But one of them is going to get you.”

Chris Mauney, who lives in the same subdivision, said he thinks Irma won’t be any worse for coastal Georgia than a big thunderstorm. He was making plans Saturday to cook the steaks and chicken in his deep freezer in case the storm knocks out his electricity.

“We’ve got the grill,” Mauney said from a rocking chair on his front porch. “We’re going to have a hurricane party.”

Only coastal Georgia was under evacuation orders, even as Irma’s center was forecast to pass 100 miles (160 kilometers) or more inland. Regardless, tropical storm winds from Irma were expected to reach the coast early Monday, said Dennis Jones, emergency management director for Chatham County, which includes Savannah. Those winds could still inundate coastal areas with storm surge amplified by unusually high tides.

“We could still see flooding that is similar to Matthew or worse,” Jones said.

In South Carolina, Gov. Henry McMaster said people seem to be complying with his order to leave eight barrier islands ahead of a storm surge of up to 6 feet (1.8 meters). He said about 44,500 people live full-time in the evacuated areas

“The storm surge is not something to be taken lightly,” McMaster said. “There’s going to be a whole lot of water. That’s why they call it the Lowcountry. It can flood very easily.”

Georgia Power spokesman Jacob Hawkins said the utility has more than 5,000 employees on standby to respond. He said the chance for widespread outages across the state appeared “very likely,” unlike Matthew a year ago that mostly blacked out coastal communities.

“We don’t anticipate this will be a highly localized event,” Hawkins said.