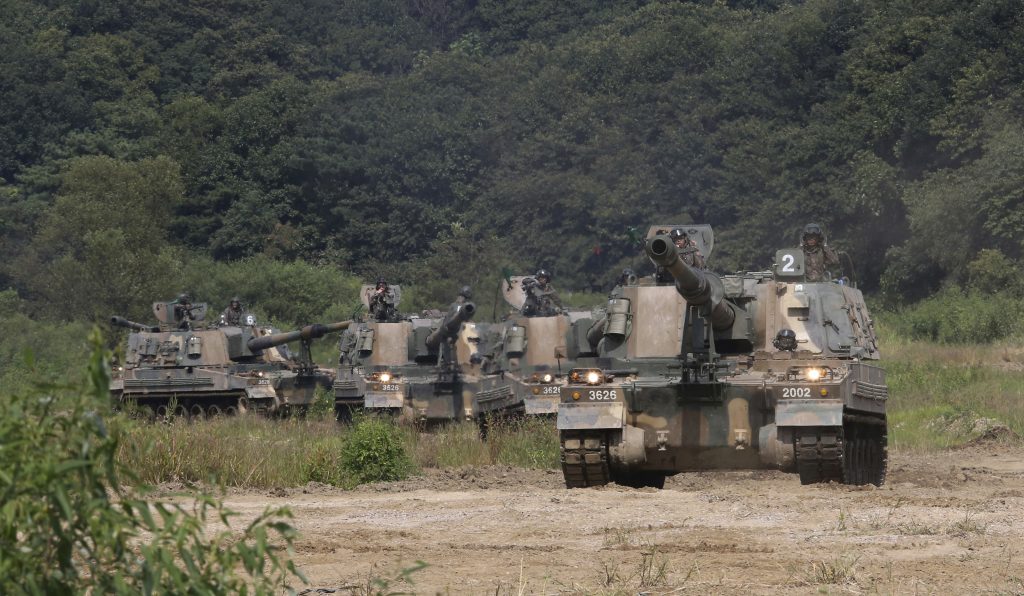 South Korea said on Monday it was preparing fresh military drills with its ally the United States and ramping up its ballistic missile defenses in response to North Korea’s sixth and most powerful nuclear test a day earlier.

The United Nations Security Council was set to meet later on Monday to discuss fresh sanctions against the isolated regime. U.S. President Donald Trump had also asked to be briefed on all available military options, according to his defense chief.

South Korea’s Defense Ministry also said it would temporarily deploy the four remaining launchers for a major new U.S. missile defense system after the completion of an environmental assessment by the government.

The rollout of the controversial Terminal High Altitude Area Defense (THAAD) system, vehemently opposed by neighboring China, had been delayed since June.

South Korea’s air force and army conducted exercises involving long-range air-to-surface and ballistic missiles on Monday following Sunday’s nuclear test, the Joint Chiefs of Staff said in a statement. More drills were being prepared with U.S. forces in the South, it said.

North Korea said an advanced hydrogen bomb for a long-range missile was tested on Sunday, prompting the warning of a “massive” military response from the United States if it or its allies were threatened.

“We are not looking to the total annihilation of a country, namely North Korea,” U.S. Defense Secretary Jim Mattis said after meeting President Trump and his national security team. “But as I said, we have many options to do so.”

President Trump has previously vowed to stop North Korea developing nuclear weapons and said he would unleash “fire and fury” if it threatened U.S. territory. That prompted the North to threaten to fire missiles toward the U.S. Pacific territory of Guam, although it has since appeared to back away from that threat.

Despite the tough talk, the immediate focus of the international response was expected to be on tougher economic sanctions against Pyongyang.

Diplomats have said the U.N. Security Council could now consider banning Pyongyang’s textile exports and the North’s national airline, stop supplies of oil to the government and military, prevent North Koreans from working abroad and add top officials to a blacklist to subject them to an asset freeze and travel ban.

“Both heads of state agreed to cooperate closely with each other and the United States, and shared the understanding [that] there must be the most powerful sanctions and pressure applied on North Korea,” presidential Blue House spokesman Park Su-hyun told a media briefing after the two leaders spoke by phone.

The aim of stronger sanctions was to draw North Korea into dialogue, he said.

In a series of tweets on Sunday, President Trump appeared to rebuke South Korea for that approach.

“South Korea is finding, as I have told them, that their talk of appeasement with North Korea will not work, they only understand one thing!” President Trump said on Twitter.

Still, the president’s response was more orderly and less haphazard than he had offered to other provocations by North Korea.

“We are aware that there could be negative ripple effects should geopolitical risks resurface,” Kim Dong-yeon told a hastily arranged policy meeting with the central bank and financial regulators before financial markets opened.

North Korea, which carries out its nuclear and missile programs in defiance of U.N. resolutions and sanctions, said on state television the hydrogen bomb test ordered by leader Kim Jong Un had been a “perfect success.”

Sunday’s test had registered with international seismic agencies as a man-made earthquake near a test site. Japanese and South Korean officials said the tremor was about 10 times more powerful than the one picked up after North Korea’s previous nuclear test a year ago.

China’s Foreign Ministry said Pyongyang was clear about Beijing’s opposition to North Korea’s nuclear test and reiterated that talks were needed to resolve the issues on the Korean peninsula.

Pyongyang tested two ICBMs in July that could potentially fly about 6,200 miles, putting many parts of the U.S. mainland within range and prompting a new round of tougher international sanctions.