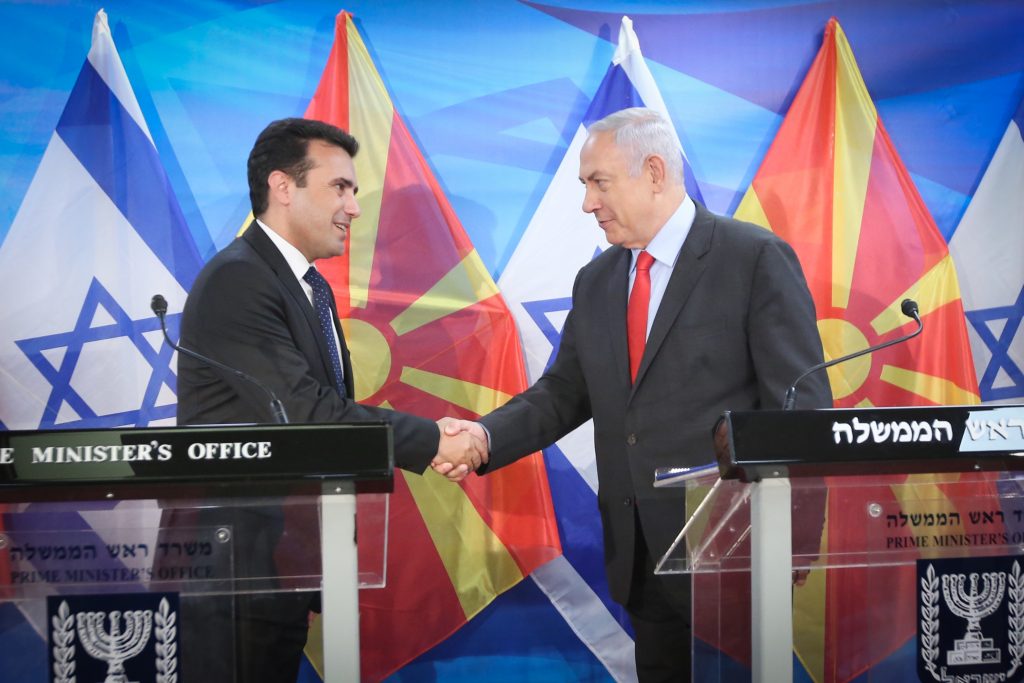 In his welcoming remarks, PM Netanyahu mentioned the current friendly relations between the countries, as well as the painful memory of the Holocaust:

“We are both small nations, democratic nations, with strong affinity, it was expressed most recently when we sent some firefighting planes to help extinguish forest fires, so we are friends in good weather, in bad weather, in stormy days, rainy days and days of fire.

“So we’re eager both to see a better future, we are here to talk about a range of fields, where we can cooperate for the betterment of our peoples and our countries, we remember the tragedy also that befell the Jews of Macedonia 75 years ago, we know, we always remember that, and we are very, very pleased to have the opportunity to talk with you both about our bilateral relations and also about standing up for Israel in international forums; it’s something that Macedonia has done and we appreciate it and hope we’ll continue to do so. For all these reasons I want to welcome you to Yerushalayim. ”

Zaev reciprocated with warm remarks of his own:

“We have the honor to meet the high representatives here in Israel. As you know yesterday we visited the president of the country, and we had a very good meeting with the business community, we saw the startups, the accelerators, we visited very important companies here in Israel, hoping that they help us for further cooperation and especially in the economic level.

“We are very happy because we are here in Israel, hoping that our cooperation will be mainly in two levels: the first level, what Israel is a good example of in the workplace, that is cooperation for the security and for world peace, and hoping through organizations like NATO — … we intend to be a member of NATO — we will continue to be cooperating with Israel in that way because that threat of the radicalism and extremism is really present here in this region against Israel, but also against my small country Macedonia, and the whole region in the western part of the Balkans. We cooperated in the level of security and the level of defense until now, and I know we will increase this cooperation because it’s in the interest of both nations and their citizens.

“I hope that we will have a lot to learn from Israel, for high-tech, for the startups, to open jobs for our youth, that is one of the important things for any Prime Minister, I suppose for any government, also, for my government. We are a new government, three months until now and this is one of my first visits and I am very happy, because I’m here with the delegation of the government in Israel.

“I want to confirm once again that, I would like to point that Macedonia highly respects the cultural heritage of the Jewish people in our country, we remember the victims of the Holocaust, with a message to never be repeated. In 2011, the memorial center for the Holocaust of the Jews of Macedonia was opened, and since 2015 we work actively on fully repairing and rehabilitating the Jewish cemetery in Bitola and the construction of a memorial park. That is something I want to stress here, especially because that is the honest approach from my citizens to the friendly citizens of Israel.”

During the meeting the delegations discussed deepening economic and political cooperation between Israel and Macedonia, especially in the fields of energy, agriculture, start-ups and technology.