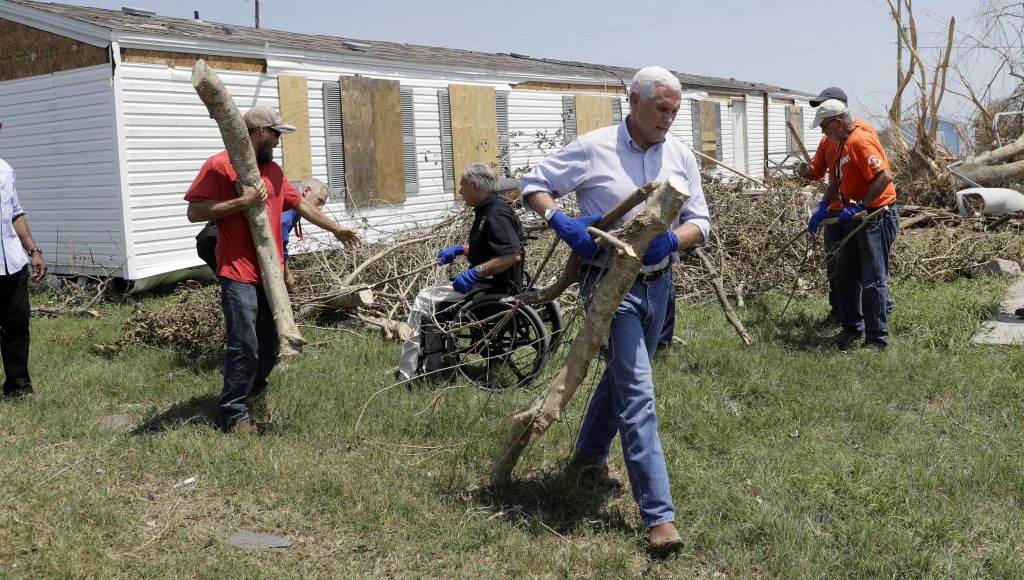 Vice President Mike Pence surveyed the wreckage Thursday in the small coastal town where Harvey first slammed ashore as a Category 4 hurricane. The vice president toured a church whose side was blown out by the storm.

Pence arrived in Rockport to see the devastation caused by the hurricane-turned-tropical depression that set a rainfall record and severely flooded the Houston area. Harvey’s five straight days of rain totaled close to 52 inches, the heaviest tropical downpour ever recorded in the continental U.S.

During a 45-minute drive to his first stop, Pence’s motorcade drove past a long row of utility poles that remained standing but at an angle. He also saw scattered debris and some downed power lines. Residents of Rockport were among the first in the U.S. hit by Harvey, which came ashore last Friday as a Category 4 hurricane. Pence was visiting as the floodwaters in Houston that displaced thousands had begun to recede.

The vice president, wearing jeans and cowboy boots, was joined by his wife, Karen, Energy Secretary Rick Perry, a former Texas governor, and other Cabinet members. Pence was greeted at the airport by Texas Gov. Greg Abbott.

President Donald Trump had traveled Tuesday to Corpus Christi and Austin for briefings with local officials. The president plans to return to Texas Saturday and possibly visit Louisiana, parts of which are being lashed by Harvey’s remnants.

The vice president is expected to meet with victims of the storm during a tour of the region, a trip that will be different than the president’s initial visit, which focused on the federal government’s coordination with state and local officials.

Trump drew criticism for not directly mentioning hurricane victims when he tweeted Wednesday that after seeing “first hand the horror & devastation” wrought by Harvey “my heart goes out even more so to the great people of Texas!”

But Trump saw little damage during his visit to Corpus Christi — mostly boarded-up windows, a few downed tree limbs and fences askew from his SUV as it whisked him from the airport to a firehouse for his first briefing.

Perry, briefing reporters aboard Air Force Two, said Trump had wanted to visit Texas on Monday but was advised to visit Corpus Christi or Austin “where no search-and-rescue resources would be pulled away.”

“The president went to the right place. He literally and figuratively waved the flag,” Perry said, noting the president’s impromptu remarks to supporters gathered outside a Corpus Christi fire station that were capped with his waving of the Texas flag.