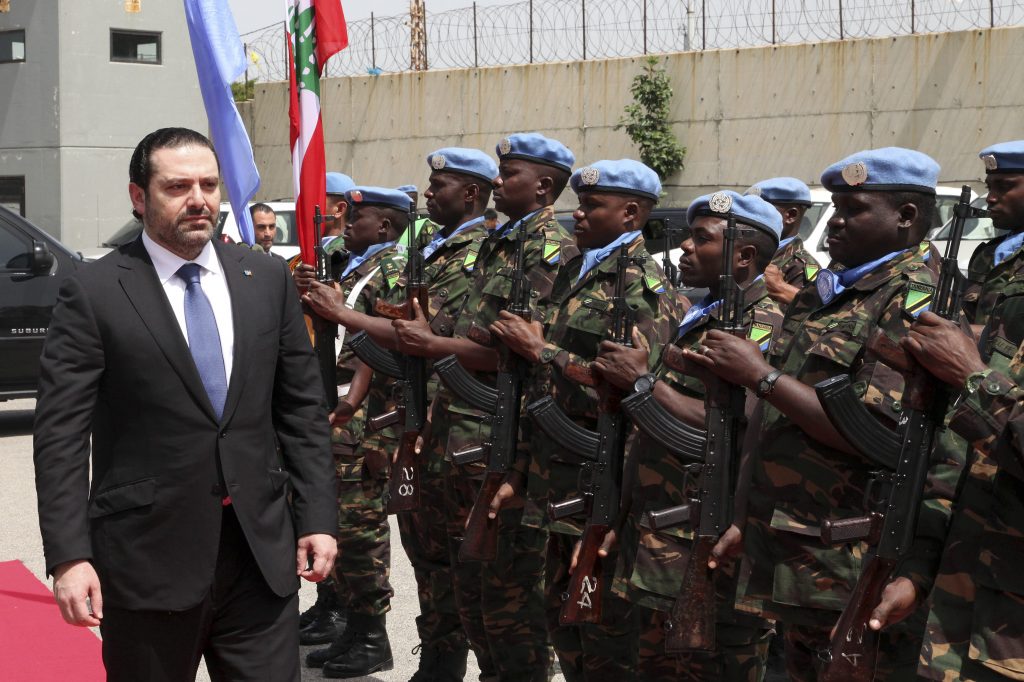 The head of U.N. peacekeepers in Lebanon is pushing back after U.S. and Israeli criticism of the mission, saying Wednesday that his force has no evidence that weapons are being illegally transferred and stockpiled in the Hezbollah-dominated south.

Maj. Gen. Michael Beary defended the 10,500-strong force as the U.S. and France publicly disagreed about whether its mandate, which expires on Aug. 31, should be beefed up to tackle Hezbollah.

U.S. Ambassador Nikki Haley said in a statement coinciding with Wednesday’s closed U.N. Security Council consultations on the force, known as UNIFIL, that Hezbollah openly boasts about its illegal weapons stockpile and publicly threatens the destruction of neighboring Israel.

“The Security Council cannot adopt a business-as-usual approach when so much is at stake,” she said. “We call on the members of the Security Council to join us in taking real action to make UNIFIL a stronger peacekeeping mission and to stand up against forces of terror in Lebanon and around the region.”

But France’s deputy U.N. ambassador Anne Guegen, whose country is in charge of drafting the council resolution renewing the mandate, told reporters that “it is of paramount importance for the stability of Lebanon and the region, and in the best interest of all, that UNIFIL keeps its mandate and is in a position to fulfill it, with the full backing and confidence of the Security Council.”

“Though the situation has remained generally calm in the south, it is also still very fragile and volatile,” she said, and all parties must uphold their commitment to a 2004 Security Council resolution ordering all Lebanese militias, including Hezbollah, to disarm, and calling for the Lebanese army to extend its authority throughout the south.

Russia’s U.N. Ambassador Vassily Nebenzia told reporters after the council’s discussion that the mandate should be renewed in its present form, noting that the Lebanese government has not asked for a change in the mandate.

Asked whether there was support for the U.S. proposal to change the mandate, he replied: “I think the majority of those who spoke supported the renewal of the mandate as it is now.”

Beary, the Irish commander who leads UNIFIL, said it has successfully maintained the peace for more than a decade, and prevented major “misunderstandings” from erupting between Israel and Hezbollah.

“We should not be looking to upset that,” he told The Associated Press on Wednesday aboard the Brazilian flagship for the UNIFIL maritime force.

He said his force’s mandate is “viable” and has enabled his mission to deploy south of the Litani river and along most of the 110-kilometer (68-mile) frontier between Israel and Lebanon. It also allows for patrols and helicopter reconnaissance missions.

On Wednesday, UNIFIL’s Maritime Task Force carried out a joint training exercise with the Lebanese army, simulating an interception at sea of a ship carrying contraband.

Lebanese soldiers swooped aboard the UNIAO from a helicopter, and others boarded from two inflatable boats to seize the illegal shipment and arrest the crew members as UNIFIL and Lebanese officials watched.

“I have no evidence, nor have I been provided with any evidence of weapons transfers into my area of operations,” which is confined to southern Lebanon, Beary said.

“We are extremely active in the area and if there was a large cache of weapons, we would know about it” he added.

UNIFIL is not deployed along the border with Syria. Iran is suspected of shipping weapons to Hezbollah through Syria, where the terrorist group is fighting alongside President Bashar Assad’s forces. Israel has targeted suspected convoys there with airstrikes.

Israel’s Ambassador to the U.N. Danny Danon told the AP that U.N. forces should have an increased presence in their area of operations, with more patrols and without any restrictions on its movements.

He also said the mission should be gathering “real-time updates” about violations, saying it is often last to report them.

“If Hezbollah is able to turn civilian border towns into terrorist outposts and increase their hostile activities along our border — all while UNIFIL is stationed nearby — then it should be obvious to the Security Council that significant changes are needed in the mandate,” Danon said.

Rear Admiral Sergio Fernando de Amaral Chaves Jr., the commander of the maritime force, the U.N.’s first and only naval unit, said his forces have helped deter smugglers and improve the conditions for Lebanon’s maritime economy since it deployed in 2006. He said no weapons smuggling through sea has been reported since 2012, when in cooperation with the Lebanese Armed Forces, two attempts to bring arms into Lebanon through ports were foiled.

“We are here patrolling. Helping to establish the security environment …this is our big contribution,” Chaves said.