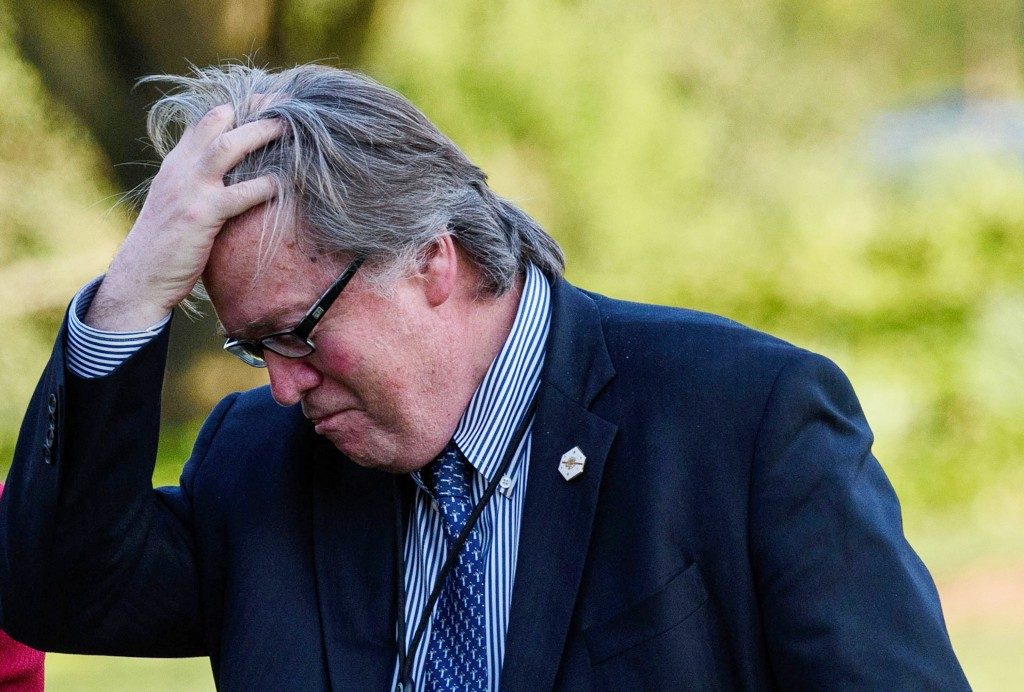 Steve Bannon was fired/let go/allowed to resign/left on his own — whichever version takes your fancy. He is no longer in the administration. And everyone has something to say about it.

I do, too. But there are many layers to help bring you, dear reader, up to par on why it’s such a big deal. I’ll do it in ten points.

What was his agenda? Well, it’s all over his site, Breitbart News. Bannon believes that candidates from both parties can win elections, but ultimately it’s the “deep state,” the bureaucracy and entrenched officialdom including the media, who will decide policy. He believed that Donald Trump’s victory last year proved that the American people want change, and that change must be forced through over the heads of the “deep state.” This means making unpopular decisions and then thumbing your nose at the media. He derided the “globalists,” people who believe the United States has a responsibility to right the world or help other countries. The “America First” slogan of governance was resurrected by him.

For starters, Bannon wanted President Trump to focus on a big beautiful wall along the border with Mexico. It’s what he was elected to do, not to pay attention to the media naysayers. He then wanted the president to declare China a currency manipulator and have the Chinese expelled from the World Trade Organization. A third imperative was for the U.S. to get out of Afghanistan ASAP. What is most relevant to the Jewish community is his “live and let live” attitude toward Israel. When Palestinian Authority leader Mahmoud Abbas was at the White House in May, Bannon stayed home. “I’m not going to breathe the same air as that terrorist,” he texted a friend. He lobbied aggressively for President Trump to move the U.S. embassy to Yerushalayim. It is such sentiments that need to be expressed around the president, not those of the visionistas who think they’ll bring peace when nobody else succeeded.

Let’s be honest. The net loss to Israel and to the American Orthodox community with Steve Bannon’s departure is greater than any supposed gain. Bannon is a brash, take-no-prisoners former Navy officer who in many ways is the alter ego of Donald Trump. He pushed on with his agenda quietly but determinedly for eight months, never talking to the media — well, almost never; he did give one interview, to the “Failing” New York Times. He was opposed from the start by members of the Trump administration who wanted to mold it in a more conventional form. The media shamefully, shamelessly, lied blatantly about who he is and what he stands for. They called him a white supremacist despite the unreserved vouching for him by his close friends. They called him an anti-Semite, relying on the dubious claims of a former spouse in 20-year-old divorce proceedings. This is all false, say those who know him best.

Then a Wall Street investment banker, Bannon funded the opening of a news website in 2007 by a group of ideologues who believed the existing media was in the tank for Democratic candidates and would not properly vet the upcoming 2008 election. Fun fact: the site, Breitbart, is named for its founder, Andrew Breitbart, a very traditional Jew who said he went into journalism to help Israel’s image. Its current editor-at-large, Joel Pollak, is also a member of the tribe. And Bannon worked closely with them for years, stepping into the leadership following Breitbart’s sudden passing in 2012. Some anti-Semite. Forget about reinventing conservatism, this is reinventing anti-Semitism.

Bannon was ultimately successful — wildly so — during the first half-year of Trump’s presidency. He had the access he needed to the Oval Office and in almost every significant battle he fought, the president came down on his side. The U.S. is no longer in the Paris Climate Accord, the morality-disintegration revolution launched by the Obama administration was slowed somewhat, and James Comey was unceremoniously shown the FBI door. But at the six-month mark, Bannon’s influence waned as turf battles at the White House heated up, and he gained powerful enemies when Jared Kushner and Ivanka Trump began seeing him as the destroyer of their father-in-law/father’s presidency. A duel of wits erupted, ending with Bannon’s ouster. I can imagine any number of officials in the Trump administration grabbing the opportunity to work under a President Hillary Clinton. Bannon? Inconceivable. He was in it for the ideology.

Bannon’s “welcome” by the media will go down as one of the most appalling moments in journalism history. Accusations of anti-Semitism flew thickly through the cybersphere, where they remain to be picked up by enemies within the GOP and without. Sure the media has a First Amendment right to publish whatever they want about him. The white supremacists who rampaged in Charlottesville last weekend and in Boston this past week are also holding up their right to gather under the rubric of the First Amendment. And the infamous 1898 New York Journal article blaming the explosion of the USS Maine in Havana harbor on “the work of an enemy” — causing the Spanish-American War — was also protected speech. All three are lies.

Read this tweet from Brad Lander, a city councilman from Brooklyn and a leader of New York City’s so-called “progressive movement”: “Delighted to see Bannon go. Next, I’d like to see Trump, Pence, Ryan & McConnell go too. That will take some organizing. Let’s get to it.” This is a concept expressed across social media — it’s not Bannon we’re after, it’s you, Mr. President. Mr. Trump, all those people praising you for letting Bannon go are after the ultimate prize: you.

Bannon predicts he’ll be more effective outside the White House than in. He has returned to his outsized microphone at the helm of Breitbart News and told staffers in their first editorial meeting Friday that “it’s war.” He continues his close and cordial relationship with the president, who enjoys hearing his perspective. “The Trump presidency that we fought for, and won, is over,” Bannon said Friday, shortly after his departure. “We still have a huge movement, and we will make something of this Trump presidency. But that presidency is over. It’ll be something else. And there’ll be all kinds of fights, and there’ll be good days and bad days, but that presidency is over.”

Bannon came on the Trump train at the lowest point in the campaign — after a decade-old recording emerged of the candidate talking coarsely, and Republicans openly called for Trump to exit the race. Bannon effectively righted the campaign, made it about the issues, and brought it in for a soft landing. Even now, Mr. Trump encouraged him to take on the Republican establishment. “I said, ‘Look, I’ll focus on going after the establishment,’” Bannon said he told Mr. Trump. “He said, ‘Good, I need that.’ I said, ‘Look, I’ll always be here covering for you.’ I think they’re going to try to moderate him. … [But] his natural tendency — and I think you saw it this week on Charlottesville — his actual default position is the position of his base, the position that got him elected. I think you’re going to see a lot of constraints on that. I think it’ll be much more conventional.”

May G-d help us