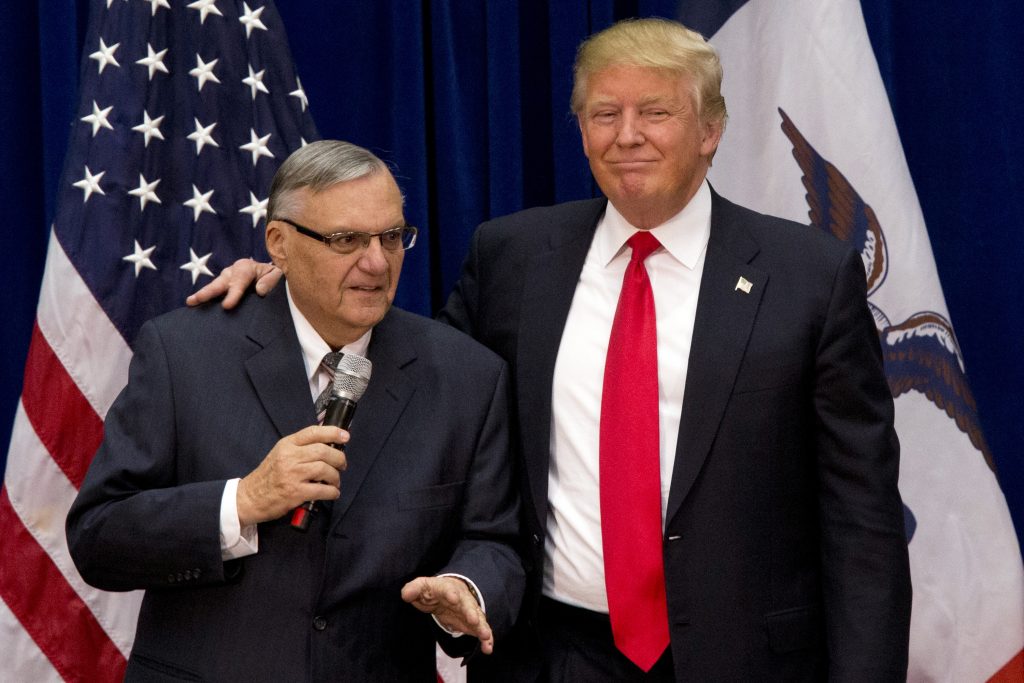 President Donald Trump told Fox News he is “seriously considering” issuing a pardon for former Arizona sheriff Joe Arpaio, who was convicted last month of criminal contempt for ignoring a judge’s order to stop detaining people because he merely suspected them of being undocumented immigrants.

“I might do it right away, maybe early this week. I am seriously thinking about it,” Trump said, according to Fox News. He said Arpaio was a “great American patriot” who had “done a lot in the fight against illegal immigration.”

“Is there anyone in local law enforcement who has done more to crack down on illegal immigration than Sheriff Joe?” Trump said, according to Fox News. “He has protected people from crimes and saved lives. He doesn’t deserve to be treated this way.”

Arpaio, whose extreme stance and tactics on illegal immigration made him a household name, was convicted of criminal contempt last month by a federal judge in Arizona. He faces up to six months in prison at his sentencing, which is scheduled for Oct. 5. Jack Wilenchik, Arpaio’s attorney, said after Arpaio was convicted that the former sheriff would appeal to get a jury trial, and that the judge’s conclusion was “contrary to what every single witness testified in the case.”

“Joe Arpaio is in this for the long haul, and he will continue his fight to vindicate himself, to prove his innocence, and to protect the public,” Wilenchik said.

Arpaio told Fox News, “I would accept the pardon because I am 100 percent not guilty.”

Arpaio, 85, the former sheriff of Maricopa County, Arizona, has long been an advocate for Trump and spoke in support of him at the Republican National Convention in July. The men seem to share the same worldview when it comes to illegal immigrants and using harsh tactics against criminals or suspected criminals. Arpaio is well known in part for forcing his inmates to wear pink underwear and sleep outdoors in his Tent City Jail.

The legal saga surrounding Arpaio dates back years. In 2011, as part of a lawsuit, the then-sheriff was enjoined by U.S. District Judge G. Murray Snow from detaining people he thought to be illegal immigrants, when they were not charged with any other crimes. Prosecutors alleged that he continued to do so, and last year, the Justice Department decided to pursue a criminal contempt-of-court case against him.

Critics said his policy of detaining people on mere suspicion was racist and illegal, and his refusal to honor a court’s order to stop was brazen. Wilenchik has said that the judge’s order enjoining Arpaio was “not clear,” and suggested that Arpaio was merely doing what others do routinely: turning over those in the country illegally to the U.S. Border Patrol.