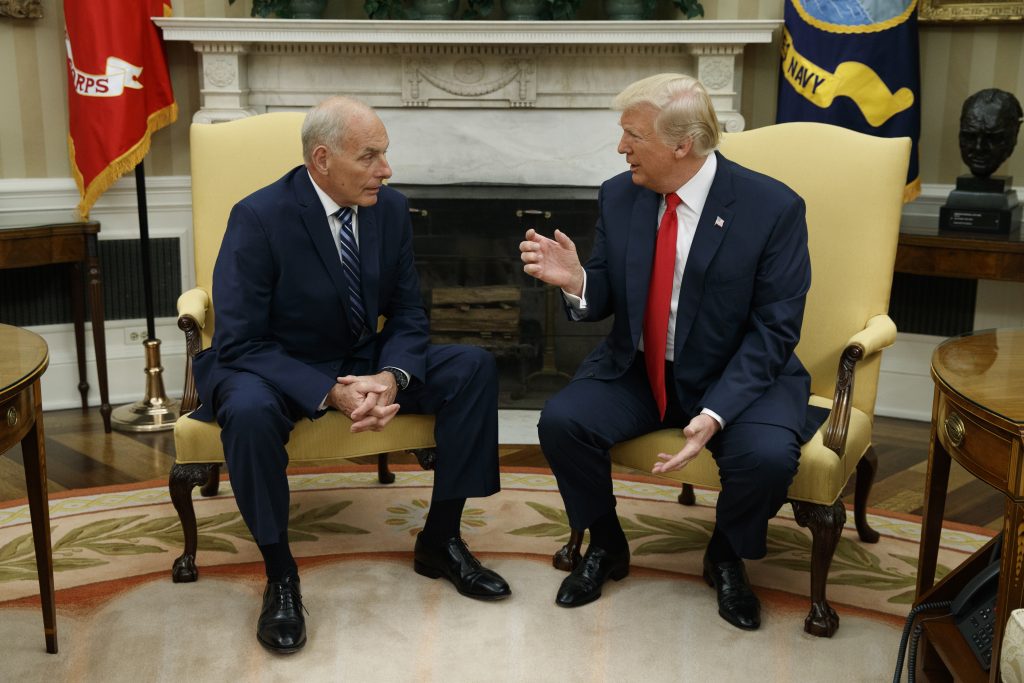 Raised voices could be heard through the thick door to the Oval Office as John Kelly — then secretary of Homeland Security — offered some tough talk to President Donald Trump.

Kelly, a whip-cracking retired general who was sworn in as White House chief of staff on Monday, had demanded to speak to the president alone after Trump complained loudly that the U.S. was admitting travelers from countries he viewed as high risk.

Mr. Kelly first tried to explain to President Trump that the admissions were standard — some people had legitimate reasons to visit the country — but the president insisted that it was making him look bad, according to an administration official familiar with the exchange about a month ago.

Kelly then demanded that other advisers leave the room so he could speak to the president frankly. Trump refused at first, but agreed when Kelly insisted.

It was an early indication that Kelly, a decorated retired Marine general who served three tours in Iraq, is not afraid to stand up to his commander in chief.

Tapped to bring order to a chaotic West Wing, John Kelly began to make his mark immediately on Monday, ousting newly appointed Communications Director Anthony Scaramucci and revising a dysfunctional command structure that has bred warring factions. From now on, said White House press secretary Sarah Huckabee Sanders, all senior staffers — including the president’s son-in-law Jared Kushner and chief strategist Steve Bannon — will report to Kelly instead of the president.

“It definitely has the fingerprints of a new sheriff in town,” said Blain Rethmeier, who guided Mr. Kelly through the Senate confirmation process for the Homeland Security post. Rethmeier said that what stood out about Kelly during the time they worked together was the way Kelly commanded respect from everyone he encountered — and the way he respected others.

Gen. Kelly fostered a reputation as an outspoken commander who didn’t shy away from unpopular opinions during his military career. Rethmeier said that Kelly also respects authority deeply — “and that’s something that Trump sort of smells out, if you respect him or not.”

“If he disagrees with you, he’ll disagree respectfully,” Rethmeier said.

It was a point Gen. Kelly made clear during his confirmation hearing in January.

In April, Gen. Kelly bluntly challenged members of Congress critical of the Trump administration’s aggressive approach to immigration enforcement to either change the laws or sit quiet.

But after being confirmed as part of Trump’s Cabinet, Gen. Kelly also tried to moderate some of the president’s hard-line positions, even as he publicly defended them.

Hours after President Trump said deportations of people in the U.S. illegally were being carried out as a “military operation,” Gen. Kelly said the U.S. would not enlist the military to enforce immigration laws.

Gen. Kelly and Defense Secretary Jim Mattis, another retired general, made clear to associates that they were not involved in drafting it or aware of its details around the time that President Trump signed the original order. Both moved swiftly to address gaps in the measure, with Mattis asking that Iraqis who helped U.S. troops be exempt and Kelly clarifying that green-card holders would not be affected.

Nonetheless, Gen. Kelly launched a particularly robust defense of the order to lawmakers and reporters, which was welcomed by the White House.

Generals Mattis and Kelly also agreed in the earliest weeks of Trump’s presidency that one of them should remain in the United States at all times to keep tabs on the orders rapidly emerging from the White House, according to a person familiar with the discussions. The official insisted on anonymity in order to discuss the administration’s internal dynamics.