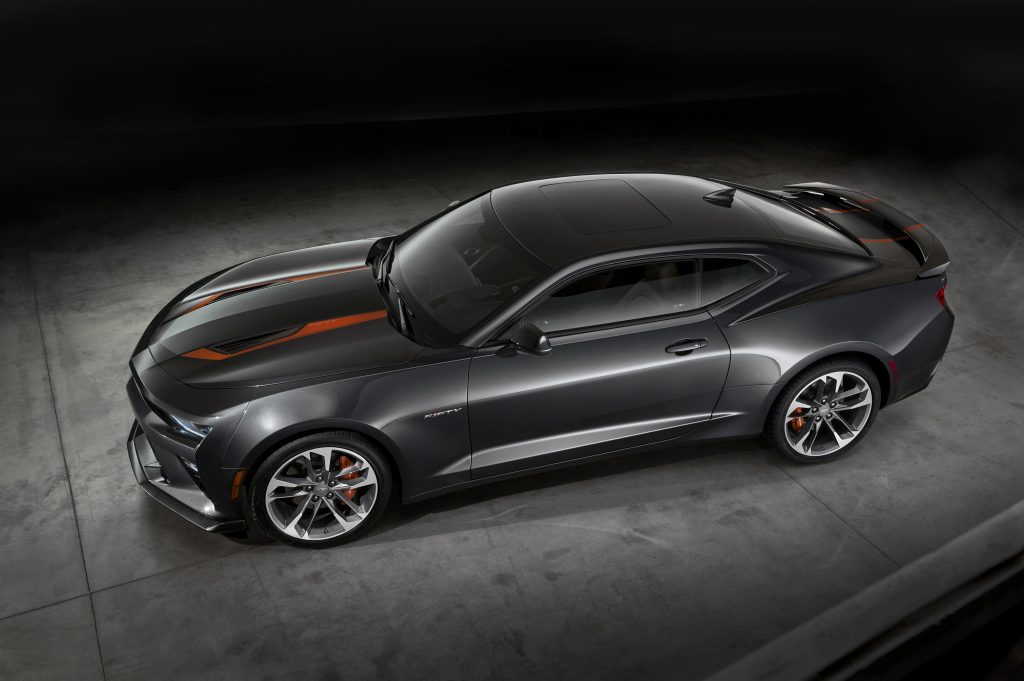 As the 50th anniversary celebration winds down for the Chevrolet Camaro, it’s right back where it started: playing second wheel to Ford’s Mustang in the sales charts. Yet Camaro carves a distinct place in pony car Americana both past and present, renowned for stoplight sprints, countless good times and pacing the Indianapolis 500 nine times.

“Customers appreciate engine horsepower and better handling — and how it makes them feel inside,” said Todd Christensen, Camaro marketing manager. “There’s a lot of passion with Camaro owners that they bring into the Chevy brand.”

Camaro was launched for model year 1967 to counter Ford’s Mustang and give baby boomers something unique in Chevy showrooms.

Chevrolet already offered the Corvair, Chevelle and Corvette, but the Camaro was sportier than a Chevelle, more powerful than the Corvair and was affordable, unlike Corvette. It was quick, too. Car and Driver ran a 1968 Z28 0-60 mph in 5.3 seconds, one-tenth quicker than a Mustang with the same-sized 302 cubic-inch engine.

Times had changed, but Camaro was relatively quick and looked handsome. Unlike Mustang, which evolved from a big muscle car to the ridiculous Mustang II — the Pinto-esque Shetland of pony cars — Camaro was unswerving.

“Among classic Camaros, I have come to appreciate the second-generation cars with their Ferrari-like front ends,” said Larry Edsall, author of a book about the Camaro. “Camaro never went through a Mustang II phase.”

The smaller, sharper third-generation 1982 Camaro needed less fuel to be fun. Base models had four-cylinder engines, but the 235-horsepower IROC filled the dreams of teenagers’ minds and walls. A sleek 1993 restyle eventually begat the 325-horsepower SS. Performance was back, but sales were kneecapped by SUV popularity, sending Camaro on hiatus after 2002. Sales were about one-third of Mustang.

The restrained styling of the first generation was gone, replaced by ever-longer noses, greenhouse canopies and cheap plastic. Camaro needed to return to the style and performance that originally made it popular.

“The fifth and sixth generations took more of their lineage from the first generation,” Christensen said. “It got us into the pony car wars, set the standards. We sold high performance for those who value that, plus affordable models with smaller engines — same as today.”

No automotive rivalry is more intense than Mustang vs. Camaro. While the original Mustang sold 559,451 in 1965, Camaro’s first year saw just 220,906. Camaro out-sold Mustang when new models were introduced, but trailed after.

Solid rear axles diminished ride and handling on both, but Mustang’s styling created a closer bond to the original. Virtually no design traits were shared between 1967 and 2002 Camaros. It was a car young people did not understand, and for which older generations felt no affection.

Camaro sales led after the 2010 overhaul, but the redesigned 2015 Mustang debuted with a standard independent rear suspension and drove like an Audi. Ford vanquished its foe in 2016. Compared with the Mustang’s wide exotic stance, Camaro’s conservative restyle on Cadillac’s ATS architecture did nothing to halt the sales slide.

“The worst thing Chevrolet could do is start discounting Camaros in order to bump sales numbers up,” said Ed Hellwig, executive editor at Edmunds.com. “It needs to stick to its plan and drum up interest with small upgrades and special edition models, a tactic Ford has traditionally used with Mustang.”

“Sales wars are nice, but at the expense of incentives, not so much,” Christensen said. “The car is selling at a pretty good clip. The current sixth generation went more upscale; the base price is higher. The affordable 2.0-liter engine does well, but we lost some who bought the cheaper trim before.”

For some, there’s no substitute for a Chevrolet Camaro.

“While Ford’s Mustang had a big head start, the Camaro was a Chevy, and no self-respecting Chevrolet fan would ever own a Ford,” Edsall said. “It went out of production for a few years, but when it came back, it established a format for the ‘modern muscle car.’”

“The Camaro is one of Chevrolet’s longest-running and most well-known nameplates,” Hellwig said. “Even if people don’t buy it in big numbers, it’s a stylish high-performance coupe that makes it an aspirational car — something every brand needs.”

No matter what, Camaro will remain true to its mission.

“It should stand for the same things: Beautiful styling and performance value,” Christensen said. “It has to have that recipe. Tastes change, but it will remain an enthusiasts’ car.”