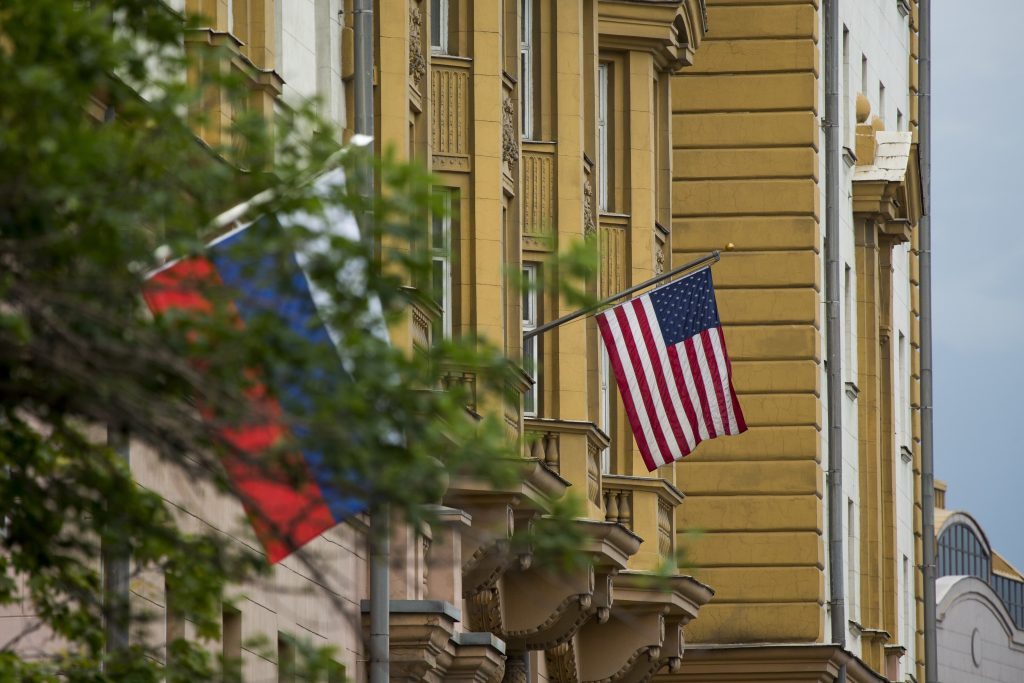 Russia’s Foreign Ministry ordered a reduction in the number of U.S. diplomats in Russia on Friday and said it was closing down a U.S. recreational retreat in response to fresh sanctions against Russia.

The U.S. Senate approved a new package of stiff financial sanctions Friday against Russia, Iran and North Korea and sent it to President Donald Trump to sign.

The legislation bars Trump from easing or waiving the penalties on Russia unless Congress agrees. It is aimed at punishing Moscow for interfering in the 2016 U.S. presidential election and for its military aggression in Ukraine and Syria, where the Kremlin has backed President Bashar Assad.

In response, the Russian Foreign Ministry said that it is ordering the U.S. Embassy in Russia to reduce the number of its diplomats by Sept. 1. Russia will also close down the embassy’s recreational retreat on the outskirts of Moscow as well as warehouse facilities.

The ministry said that the number was being cut to 455 diplomats. U.S. Embassy spokeswoman Maria Olson could not immediately say how many people had to leave to meet Russia’s new requirements.

Olson said that Ambassador John Tefft “expressed his strong disappointment and protest” with the move and passed the Russian government’s notification to Washington for review.

Russian Foreign Minister Sergei Lavrov told U.S. Secretary of State Rex Tillerson in a phone call later on Friday that Moscow was forced to respond to what he described as “illegal sanctions against Russia, libelous statements against it, a massive expulsion of diplomats and expropriation of our diplomatic property.”

Lavrov added, however, that Moscow was ready to “normalize the bilateral ties with the U.S. and cooperate on important international issues.”

Relations between Russia and the United States dropped to a post-Cold War low following Russia’s annexation of Crimea in 2014 and its support for separatists in eastern Ukraine, where fighting since 2014 has left 10,000 people dead. Reports of Russian meddling in the 2016 U.S. presidential election have put a damper on hopes for better ties that the Kremlin had pinned on Trump’s presidency.

The new package of sanctions aims to hit President Vladimir Putin and his inner circle by targeting allegedly corrupt officials, human-rights abusers and crucial sectors of the Russian economy, including weapons sales and energy exports.

The bill underwent revisions to address concerns voiced by American oil and natural-gas companies that sanctions specific to Russia’s energy sector could backfire on them to Moscow’s benefit. Lawmakers said that they also made adjustments so that the sanctions on Russia’s energy sector didn’t undercut the ability of U.S. allies in Europe to get access to oil and gas resources outside of Russia.

“This kind of blackmail aimed at restricting the cooperation between Russia and other nations is a threat for many countries and global businesses,” the statement said.

Deputy Foreign Minister Sergei Ryabkov told Russian news agencies later Friday that he would not rule out further steps, adding that Russia’s “toolbox” of how to react to the new sanctions “doesn’t come down to” cutting the embassy staff and seizing the recreational retreat.

Moscow said that it would cut the U.S. diplomatic corps even further if the U.S. decides to expel more Russian diplomats.

The Kremlin had previously said that it would not impose any sanctions on the U.S. until Trump signs the bill.