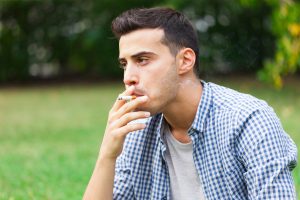 The Food and Drug Administration (FDA) plans to explore regulating the level of nicotine in conventional cigarettes, a radical step that would reshape the $130 billion American tobacco industry and, potentially, encourage millions of people to quit smoking.

The move, announced Friday, would represent one of the most sweeping federal efforts to reduce smoking since Congress required cigarette packages to carry health warnings in 1965. It follows other moves by President Donald Trump’s FDA Commissioner Scott Gottlieb to try to deal with the high cost of prescription drugs and opioid addiction, two issues not directly within the agency’s traditional mandate.

Tobacco stocks plunged after the announcement, which came just hours after the failure of Republicans’ effort in Congress to repeal and replace much of Obamacare. The FDA’s move is likely to set off a lobbying fight in Washington over the proposal, even as it pushes the industry to move faster in the development of new products that rely less on burning tobacco and more on potentially lower-risk technologies like vaping.

“The overwhelming amount of death and disease attributable to tobacco is caused by addiction to cigarettes – the only legal consumer product that, when used as intended, will kill half of all long-term users,” Gottlieb said in a statement announcing the move. “Unless we change course, 5.6 million young people alive today will die prematurely later in life from tobacco use.”

Gottlieb also said that regulators will look at banning menthol and flavored-products because of their potential for attracting young people.

In a briefing Friday, he called nicotine both the “problem” and “ultimately, the solution.” Along with nicotine reduction, the FDA plans to ease the path of entry for less-harmful nicotine delivery systems. The FDA “must also recognize potential for innovation to lead to less harmful products,” Gottlieb said in the briefing.

While reducing nicotine is bad news for the cigarette business, the impact could be tempered for companies like Philip Morris International and Altria Group, which have been putting more emphasis on innovations they say have less health risks. Philip Morris has spent over $3 billion on developing its reduced-risk portfolio.

“This was a big surprise and will make it imperative that domestic tobacco companies strive to develop innovative, safer products,” said Jack Russo, an analyst with Edward Jones & Co. who follows the tobacco industry.

Shares of Altria dropped as much as 19 percent, the biggest intraday decline since 1999. British American Tobacco’s stock fell as much as 14 percent.

“Until the eventual development of specific proposals, it’s too early to understand the practical implications,” said Simon Evans, a spokesman for Imperial Brands Plc, a Bristol, U.K.-based tobacco manufacturer that sells Winston and Kool cigarettes. Shares of the company fell as much as 9.5 percent.

The FDA gained oversight of tobacco products in 2009 through the Family Smoking Prevention and Tobacco Control Act. The law said that the agency had “the authority to regulate the levels of tar, nicotine, and other harmful components of tobacco products.”

Developing regulations around the proposal will take time, and is sure to attract fierce debate.

“The FDA plans to begin a public dialogue about lowering nicotine levels in combustible cigarettes to nonaddictive levels through achievable product standards,” the agency said in the announcement.

Sales of cigarettes have already been in decline, hurt in part by rising taxes on them. The industry’s cigarette-sales volume dropped an estimated 4.5 percent last quarter, Altria reported earlier this week. The average state excise tax was $1.74 per pack last quarter, compared with 19 cents for the same time last year, according to Altria.

The timing of the FDA announcement may be particularly painful for British American Tobacco, which just completed its almost $50-billion acquisition of Reynolds American Inc. earlier this week.

The London-based company cited the “attractive” U.S. market when it sealed the deal, which brought it brands such as Camel and Newport.