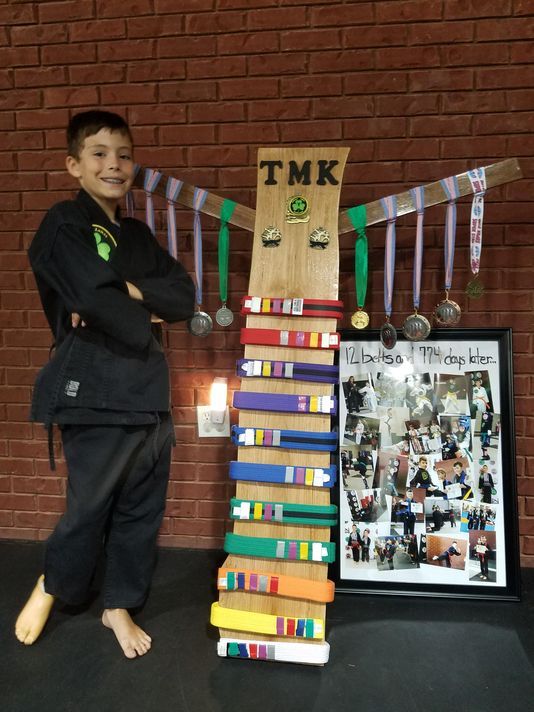 Because he was born with fibular hemimelia — a severe birth defect in which part or all of the lower leg-bone is missing, with associated limb-length discrepancy and deformity in the foot and/or knee — Toby King of Tallahassee, Florida, had to have his right leg amputated at the age of 1. The doctors told Toby’s parents that this condition may prevent him from ever being able to run, or possibly even walk. Since his amputation, Toby — who is now 9 years old — has gone through 12 prosthetic legs. They don’t last too long, and need to be replaced regularly.

Despite all this, Toby is already a black-belt in taekwondo, one of the most ancient forms of martial arts, distinguished by its broad and powerful range of kicks and punches, as well as intricate, strictly-disciplined forms. Not only can Toby run, scale ropes, and carry out his taekwondo forms to perfection, he even manages to break wooden boards with kicks from his “bad” leg. Somehow — despite the fact that some days find Toby unable to walk from the pain in his right leg — this “disabled” 9-year-old earned his black belt in just two years.

Now, it just so happens that I also took taekwondo as a child and even rose to the level of a black belt. But it didn’t take me two years. I started somewhere around the age of 8 or 9 and received my final test, and the black belt upon successful completion, at around the age of 15. Did Toby’s instructors go really easy on him and deliberately work him up the ranks quickly to encourage him? Maybe. But the fact is that this kid is able to do what most cannot, despite being handicapped. When he was interviewed about this accomplishment, Toby made the following statement, “You just have to focus. If you focus, you can do anything.” Quite a mature remark for so young a boy. And it wasn’t made off the cuff. Toby specifically wanted to share his story in order to shatter stereotypes and encourage other kids with disabilities to not let that stop them from pursuing what once might have been thought to be impossible.

There are all types of handicaps. Physical, cognitive, emotional. The list goes on. Whether a handicap was present at birth or resulted from a challenging or traumatic life experience is less important than how we view the trajectory looking forward.

Harav Yaakov Weinberg, zt”l, once related an amazing story — one that, if not told by a person of his stature, I’d probably have a very a hard time believing.

American Jewry in the late 1930s was abuzz. One of the premier Gedolei Torah, Harav Elchanan Wasserman, Hy”d, was on his way to their country. His yeshivah of Baranovitch being in financial dire straits, Rav Elchanan finally submitted to the inevitable and did what was so painful for him: He took temporary leave of teaching Torah to his precious talmidim in order to travel to the U.S.A. to raise much-needed funds for the yeshivah.

A certain man — Jewish, but like many of those who emigrated before the war, no longer very Jewishly committed — overheard some people talking excitedly about the upcoming visit of the great Rosh Yeshivah. At first, this man was but mildly interested in the discussion, but when he heard the name of the famed Torah leader, he couldn’t contain his shock. “What? Did you just say Elchanan Wasserman? He is the great Gadol you’re talking about? Why, I went to cheder with Elchanan Wasserman. We were in the same class. I can’t believe it.”

Like I said, had this story not been told by someone of Rav Weinberg’s stature, I’d have a hard time believing it; but Rav Weinberg was known for being exceedingly meticulous about accuracy. So, if he said it, it definitely happened. Apparently, then, Rav Elchanan was born with a cognitive deficiency. But, he never let that stop him. He focused all his energy on mastering that which was most precious to him — coupled, I’m sure, with plentiful, heartfelt tefillos — and stuck to it. He never gave up, and Hashem rewarded him bountifully for his tenacious efforts.

Handicaps — or deficiencies, challenges, or whatever one may choose to call them — in whatever form they come, can be awfully discouraging. Perhaps even depressing. No one can deny that. It’s no easy task to look such a monster in the eye and say with firm determination, “I am going to overcome you!” But if there’s one thing we can learn from the story of Toby, the 9-year-old black-belt with a prosthetic leg, and, l’havdil alfei havdalos, from Harav Elchanan Wasserman, it is this: When all is said and done, a handicap is powerless to determine your destiny. That power is a G-d-given gift that forever remains with you.