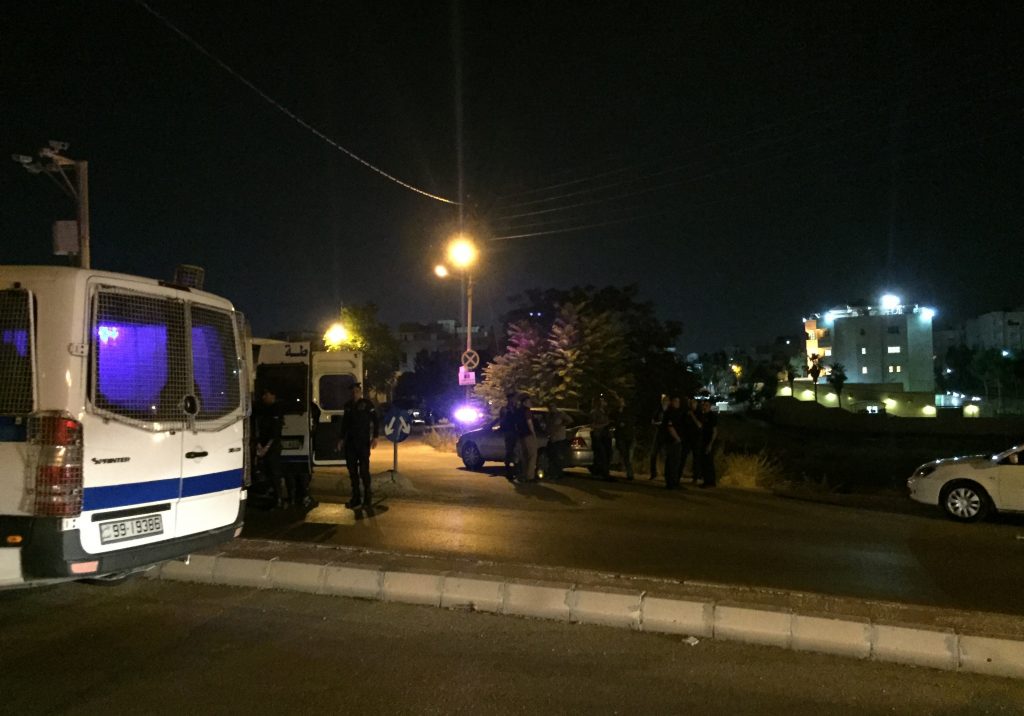 The Israeli security guard at the center of a diplomatic crisis with Jordan was allowed to return home on Monday night in a deal that was the result of intensive negotiations all through the day and evening.

The Prime Minister’s Office released a statement saying that the guard and other embassy staffers crossed over to Israel via the Allenby Bridge, bringing a happy ending to their 28-hour ordeal during which all were locked down in the embassy compound.

Prime Minister Binyamin Netanyahu spoke to both Ambassador to Jordan Einat Shalin and the security guard upon their arrival at the Allenby Bridge crossing, asked how they were and welcomed them home.

PMO said the return of the Israeli diplomatic staff was made possible, thanks to close cooperation between Israel and Jordan.

That statement made no mention, however, of a parallel agreement to remove the metal detectors at Har HaBayis, which would be replaced by less visible but-highly sophisticated cameras, to be administered jointly by the Israelis, Jordanians and the Wakf.

Israeli Prime Minister Binyamin Netanyahu discussed the situation with Jordan’s King Abdullah II by phone on Monday evening, while he met with security and defense officials on both crises. Netanyahu said at the start of a meeting with visiting Georgian PM Giorgi Kvirikashvili earlier on Monday that he’d spoken twice overnight with Israel’s ambassador to Jordan, Einat Schlein, and the security guard.

It was also revealed that Shin Bet head Nadav Argaman, who had been tasked by Netanyahu to defuse the crisis, and flew to Amman on Monday, persuaded Jordanian officials that the incident involving the Israeli security guard was in fact a terrorist attack.

The deadly incident which precipitated the diplomatic crisis took place on Sunday evening when the guard was stabbed in the stomach with a screwdriver by a worker moving furniture in one of the residences in the embassy compound.

According to a Foreign Ministry statement, the guard shot the assailant — identified as Mohammed Zakaria al-Jawawdeh, 17 — in self defense. Al-Jawawdeh was killed, and another man at the scene — the owner of the compound — was injured and later died.

After hours of negotiations, the Jordanians refused to let the guard return to Israel, demanding that he be handed over for interrogation. Meanwhile, in Jordan cries for the death penalty were heard.

The Foreign Ministry said that the Vienna Convention that covers diplomatic relations provides the guard with immunity from investigation and arrest. He, and the rest of the delegation, are still locked down in the compound.

Argaman reportedly reconstructed the attack with the Jordanians and produced evidence that the attacker — Mohammed Zakaria al-Jawawdeh, 17 — had a record of violent behavior, which cleared away any remaining doubts that the guard’s account was true. That paved the way for an agreement to release him.

The news of the emerging deal on Monday night had been preceded by a comment from Israel’s U.N. ambassador Danny Danon, who told The Associated Press that he believes the standoff with Jordan over the killing of two Jordanians by an Israeli security guard near Israel’s embassy in Amman will be resolved “shortly.”

Jordan had insisted on taking the guard into their custody for questioning and had prevented staff from leaving the premises of the embassy. Israel had invoked diplomatic immunity for the guard, and Prime Minister Binyamin Netanyahu promised to bring him home.

The Security Cabinet convened at about 8:30 p.m. Israel time to discuss the situation. “There’s desire from both countries to solve this crisis,” a senior Israeli official said.

The Prime Minister’s Office denied a media report of linkage between the Jordanian situation and Har HaBayis. There was no Jordanian demand to make the return of the Israeli security officer contingent on the removal of metal detectors, according to the PMO. However, the latest disclosures seemed to indicate that the two issues were indeed connected.

“The contacts between Israel and Jordan took place over the past 24 hours, in an atmosphere of cooperation,” the office said in a statement.

Hopes for an early resolution had run counter to the impression given by the Jordanian al-Ghad daily on Monday, which quoted officials as saying that the Israeli guard will not be permitted to leave the country without undergoing police questioning, and that if Israel continues to refuse to hand him over to the authorities, the diplomatic situation will escalate.

Ilan Erenbach contributed to this report.