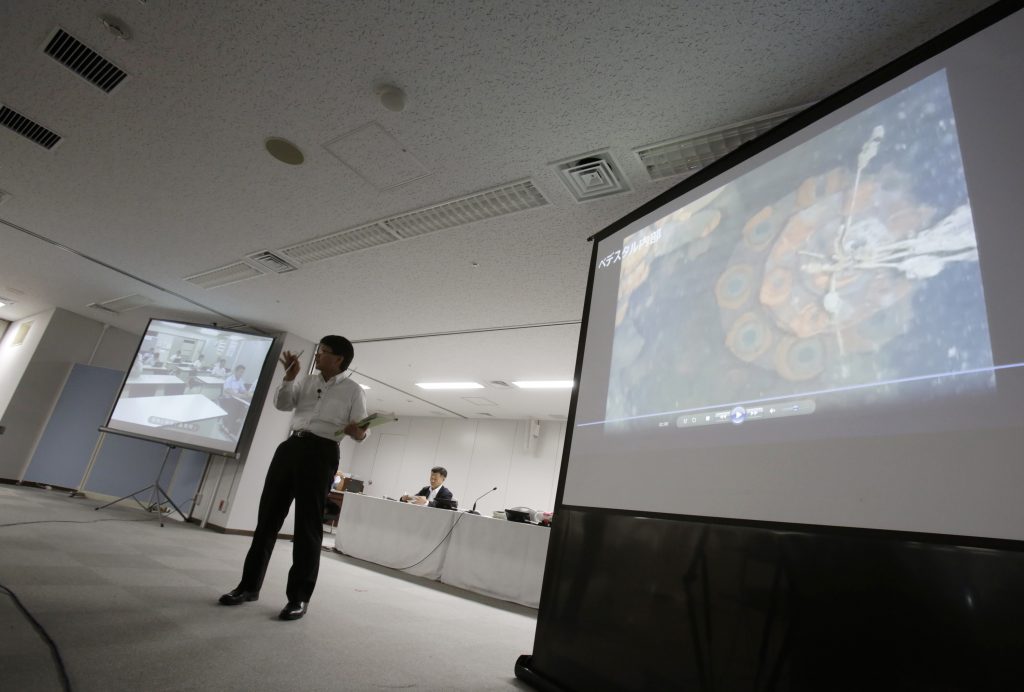 An underwater robot entered a badly damaged reactor at Japan’s crippled Fukushima nuclear plant Wednesday, capturing images of the harsh impact of its meltdown, including key structures that were torn and knocked out of place.

Plant operator Tokyo Electric Power Co. said the robot, nicknamed “the Little Sunfish,” successfully completed the day’s work inside the primary containment vessel of the Unit 3 reactor at Fukushima, which was destroyed by a massive March 2011 earthquake and tsunami.

TEPCO spokesman Takahiro Kimoto praised the work, saying the robot captured views of the underwater damage that had not been previously seen. However, the images contained no obvious sign of the melted nuclear fuel that researchers hope to locate, he said.

The robot was left inside the reactor near a structure called the pedestal, and is expected to go deeper inside for a fuller investigation Friday in hopes of finding the melted fuel.

“The damage to the structures was caused by the melted fuel or its heat,” Kimoto told a late-night news conference held nine hours after the probe ended its exploration earlier in the day.

The robot, about the size of a loaf of bread, is equipped with lights, maneuvers with five propellers and collects data with two cameras and a dosimeter. It is controlled remotely by a group of four operators.

The robot was co-developed by Toshiba Corp., the electronics and energy company charged with helping clean up the plant, and the International Research Institute for Nuclear Decommissioning, a government-funded consortium.

It was on a mission to study the damage and find the fuel that experts say has melted, breached the core and mostly fallen to the bottom of the primary containment chamber, where it has been submerged by highly radioactive water as deep as 6 meters (20 feet).

The robot discovered that a grate platform that is supposed to be below the reactor core was missing and apparently was knocked down by melted fuel and other materials that fell from above, and that parts of a safety system called a control rod drive were also missing.

Remote-controlled robots are key to the decades-long decommissioning of the damaged plant, but super-high levels of radiation and structural damage have hampered earlier probes at two other reactors at the plant.

Japanese officials say they want to determine preliminary methods for removing the melted nuclear fuel this summer and start work in 2021.

Scientists need to know the fuel’s exact location and understand the structural damage in each of the three wrecked reactors to work out the safest and most efficient ways to remove the fuel.

Robots tested earlier became stuck inside the two other reactors. A scorpion-shaped robot’s crawling function failed, and it was left inside the plant’s Unit 2 containment vessel. A snake-shaped robot designed to clear debris for the scorpion probe was removed after two hours when its cameras failed due to radiation levels five times higher than anticipated.

The robot used Wednesday was designed to tolerate radiation of up to 200 sieverts — a level that can kill humans instantly.

Kimoto said the robot showed that the Unit 3 reactor chamber was “clearly more severely damaged” than Unit 2, which was explored by the scorpion probe.