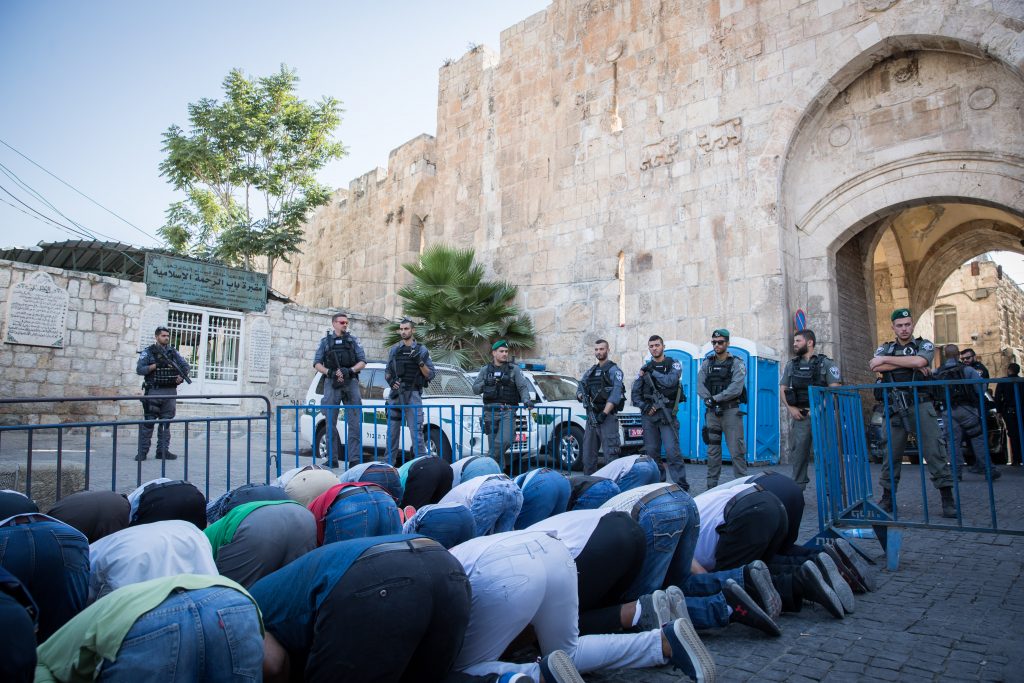 Israeli efforts to calm tensions at Har Habayis continued on Wednesday as Prime Minister Binyamin Netanyahu conducted a flurry of consultations with security advisors, the Jordanian government and the Palestinian Authority.

Speaking from Budapest, where he was meeting with Hungarian and European leaders, Netanyahu said that the metal detectors installed since Friday’s terrorist attack — whose removal has become a cause celebre in the Muslim world — would remain, though subject to constant reevaluation.

“We had a security consultation, and no decision was taken. There will be additional security consultations,” he told reporters on Wednesday. Referring to reports that his advisors are divided on whether to keep or remove the new security measures, Netanyahu said he “listens to them all.” According to Channel 2, Public Security Minister Gilad Erdan and Israel Police favor keeping the detectors, whereas the Shin Bet wants to take them out to avert an escalation of violence.

“We want to solve this crisis in the quietest way possible and to bring back the calm,” Netanyahu said. “We talk with the Arab world and we explain that there is absolutely no change to the status quo” on the holy site.

Despite reports that Saudia Arabia had intervened in the crisis, government sources were quoted as saying that the Jordanians and the Palestinian Authority have been the main contacts in trying to keep things under control.

Netanyahu spoke soon after the attack with both Jordan’s King Hussein and PA President Mahmoud Abbas. Jordan is the natural address for such contacts, as the official custodian of al-Aksa Mosque, which it administers through the Wakf.

The Israeli leader demonstrated that he has not lost his sense of humor during the crisis when he remarked about his visit to Paris before arriving in Budapest:

“When I visited the Eiffel Tower, I noticed that something had changed,” he said. “You know what had changed? They installed metal detectors.”

Netanyahu received a public vote of confidence from Jewish Home party leader Naftali Bennett: “I support the Prime Minister and Minister of Public Security. We must stand strong and ensure security on Har Habayis,” Bennett said, and noted that other holy sites at the Kosel and Mecca have metal detectors.

“Caving in to Palestinian pressure now will hurt Israel’s deterrence, and risk the life of the visitors, worshipers and law enforcement officials on Har Habayis,” he said.

Meanwhile, the Palestinian campaign against the newly installed security measures at Har Habayis was stepped on Tuesday as PA Prime Minister Rami Hamdallah called on the international community to insist that Israel remove the offending equipment.

Hamdallah alleged that the security measures were a part of an Israeli scheme to change the status quo at the site, which Netanyahu has repeatedly denied.

A member of the Supreme Muslim Council, who asked to remain anonymous, said that the metal detectors are unacceptable because they represent an effort to impose Israeli sovereignty over the site.

Not all of the faithful have been answering the call from the Wakf to boycott Har Habayis, however. Hundreds of Muslims were reportedly ignoring the Waqf ban and resumed their visits to Har Habayis on Wednesday, peacefully cooperating with security checks including the metal detectors, according to Arutz Sheva.