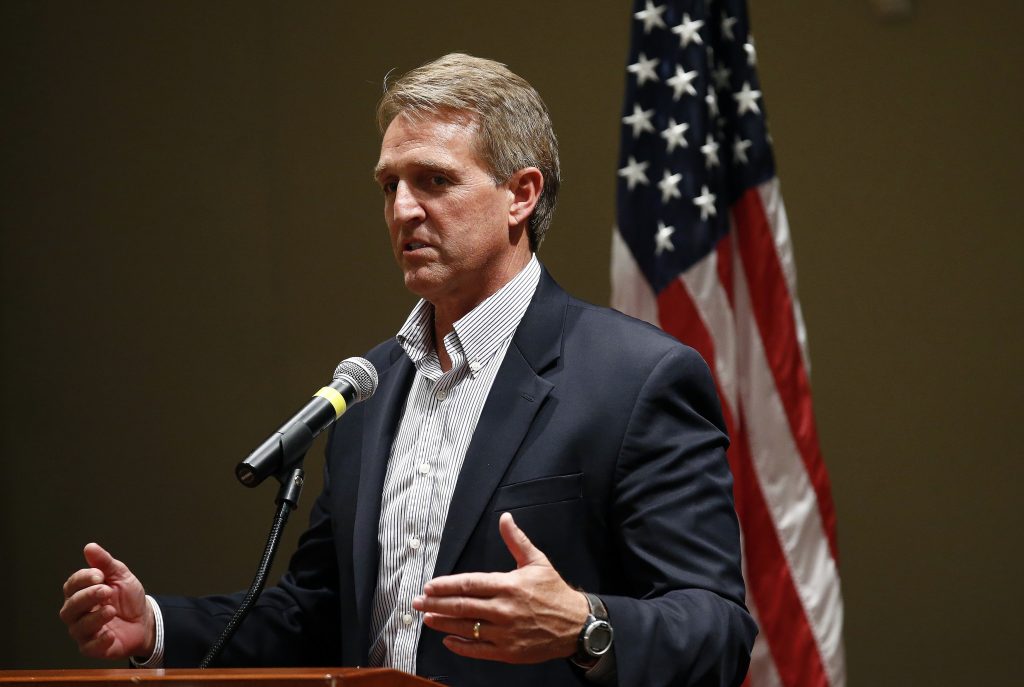 Sen. Jeff Flake flew quickly to the defense of one of his 2018 Democratic challengers late Tuesday in response to anti-Muslim comments posted on her social-media page.

“Hang in there @deedra2018,” the Arizona Republican tweeted to Deedra Abboud, a 45-year-old Phoenix immigration and estate-planning lawyer who launched her campaign to unseat him in April, after seeing an AZ Central column pointing out some of the hateful comments.

“Sorry you have to put up with this. Lots of wonderful people across AZ. You’ll find them.”

Abboud’s campaign responded on Twitter a few hours later, thanking Flake for his “leadership in rejecting behavior that doesn’t reflect our American values.” She added, “AZ’s amazing people deserve more of this.”

Abboud told Roll Call Wednesday that, as a civil-rights advocate for the last 15 years now running for office, she expected a steady flow of online vitriol to come her way — just not to this degree.

“This is something I thought we left behind during the civil-rights movement,” she said. “But it’s back and stronger than ever.”

An Abboud campaign spokesperson said in a statement to Roll Call that Flake’s sympathetic tweets provide “an opportunity to change the landscape. Our elected leaders should be leading in the civil discourse of calling out behavior that does not reflect our American values and of being competitive without character attacks.”

“People are ready for leadership and are tired of negative campaigns,” she added. “You can show you are the better candidate without personal attacks on ethnicity, religion, color, looks and fashion.”

Flake will defend his seat for the first time in 2018 after taking office in 2012 by beating Democrat Richard Carmona by 3 points.

He faces a potentially daunting primary challenge from other Republicans after being a harsh critic of President Donald Trump in 2016.

Republican Kelli Ward, a former state senator in Arizona who unsuccessfully challenged John McCain in 2016, has already announced she will take on Flake this time around.

An Arizona Democrat hasn’t served in the U.S. Senate since Dennis DeConcini in 1988.

Abboud, who converted to Islam 19 years ago, helped found Arizona’s first office for the Council on American-Islamic Relations in 2003.

“When 9/11 shook our country to the core, I became an advocate,” Abboud told the Arizona Republic in April.

“Not just because Muslims were facing anger and fearmongering, but because I am an American. Because I have always believed in our compassion and our strength in our country that can come together.”

Abboud has staked her campaign message on improving the education system, protecting Obamacare from Republican efforts to repeal it, and making herself more available to constituents than the incumbent.

A recent campaign post championing the constitutional separation of church and state was a particular magnet for hateful comments on social media.

“Get with the times and get rid of the rag on ur head. Adapt or G’bye,” wrote one commenter.

But others have offered words of support.

One commenter encouraged her to “ignore the hate,” and added, “I don’t know if I’ll support your campaign, but my decision will have absolutely nothing to do with your faith. Stay strong!”

Alt-right activists sabotaged a campaign meet-and-greet at a restaurant outside Phoenix in May when they caught wind of the event.

But the hateful comments and protests don’t seem to have changed Abboud’s opinion of her state.

“Arizona is a very welcoming state,” she says in the introductory video on her campaign website. “My husband and I have made our life here. There is nowhere that we would rather live.”