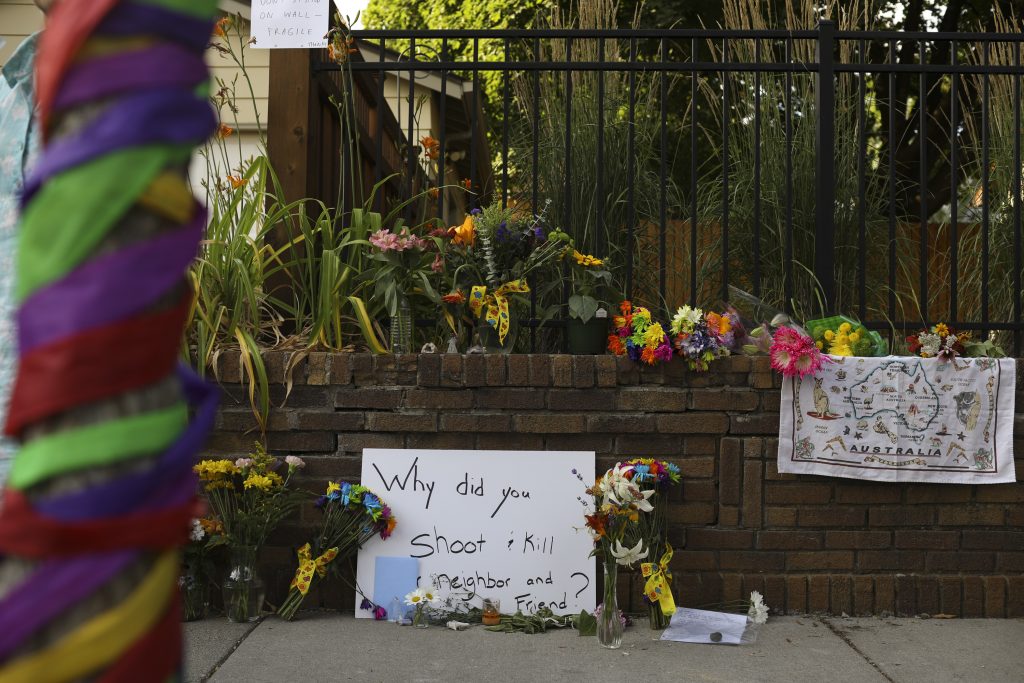 An Australian woman who called 911 to report what she believed to be an active assault was shot and killed by a Minneapolis police officer in a case that has left many relatives and neighbors searching for answers.

Authorities have released no details about what led to the shooting of Justine Damond, a meditation teacher and bride-to-be who was killed late Saturday by an officer who reportedly fired his weapon from the passenger seat of a squad car.

There were no known witnesses other than the two officers in the squad car. A newspaper report said Damond was shot while standing alongside the car in her pajamas.

The Hennepin County Medical Examiner’s office on Monday night said Damond died of a gunshot wound to the abdomen, and classified her death as a homicide. The report identified her as Justine Ruszczyk, but she had begun using her fiancé’s last name professionally ahead of their planned August wedding.

Her fiancé, Don Damond, said the family has been given almost no additional information.

“We’ve lost the dearest of people, and we’re desperate for information,” he said. “Piecing together Justine’s last moments before the homicide would be a small comfort as we grieve this tragedy.”

Damond’s family in Sydney issued a statement Monday saying they were trying to come to terms with the tragedy and understand why it happened. On Tuesday, her father spoke out publicly for the first time.

“We thought yesterday was our worst nightmare, but we awoke to the ugly truth and it hurt even more,” John Ruszczyk told reporters. “Justine was a beacon to all of us. We only ask that the light of justice shine down on the circumstances of her death.”

“I have the same questions everybody has: ‘What happened?’” Hodges said in an ABC interview.

Minnesota’s Bureau of Criminal Apprehension is investigating the shooting. In a statement Monday, the BCA said more information would be provided once the officers have been interviewed.

The BCA said no weapons were found at the scene.

The officer who shot Damond was identified by his attorney as Mohamed Noor, a Somali-American. A city newsletter said he joined the police department in March 2015.

The attorney, Tom Plunkett, released a statement saying Noor offered his condolences to the family “and keeps them in his daily thoughts and prayers.”

“Officer Noor is a caring person with a family he loves, and he empathizes with the loss others are experiencing,” the statement said.

Noor was sued earlier this year after a May 25 incident in which he and other officers took a woman to the hospital for an apparent mental health crisis. The lawsuit claims Noor and the other officers violated the woman’s rights when they entered her home without permission and Noor grabbed her wrist and upper arm. Noor relaxed his grip when the woman said she had a previous shoulder injury, the lawsuit says.

KSTP-TV reported that city records show Noor had three complaints on file. The station did not provide details on the nature of the complaints, but said one was dismissed with no disciplinary action and the other two are pending.

The Star Tribune, citing three people with knowledge of the shooting, said the officers pulled into the alley in a single squad car, and Damond talked to the driver. The newspaper’s sources, which it did not name, said the officer in the passenger seat shot Damond through the driver’s-side door. A BCA spokeswoman did not return messages seeking to confirm that account.

“This is a tragedy — that someone who’s asking for help would call the police and get shot by the police,” Hargrave said.

Officials said the officers’ body cameras were not turned on and a squad car camera did not capture the shooting. Investigators were still trying to determine whether other video exists.

Once the investigation is complete, Hennepin County Attorney Mike Freeman would decide whether to charge the officer. Freeman would not comment on the broader case Monday, but said both officers likely should have turned on their body cameras as they were approached by Damond in an alley.

Police Chief Janee Harteau called the killing a “tragic death” and said she understands why the community has questions.

“I’ve asked for the investigation to be expedited to provide transparency and to answer as many questions as quickly as we can,” Harteau said.

The Fulton neighborhood where the shooting happened is a mix of middle- and upper-middle-class homes about a half-mile from city lakes that are a popular destination for residents and tourists.

Damond’s death is the latest high-profile police shooting in the Twin Cities area in recent years. Last year, 32-year-old Philando Castile was killed by an officer during a traffic stop in a nearby suburb after he told the officer he was armed. And in November 2015, a Minneapolis police officer shot and killed Jamar Clark during a struggle in which the officer said Clark grabbed his partner’s weapon.

Damond’s business website indicates she relocated to Minneapolis and worked as a yoga instructor, meditation teacher and personal health and life coach.

Originally trained as a veterinarian, Damond indicated on the site that she was “most passionate about supporting individuals and organizations to discover the power and potential within their own brains and hearts.”

Nancy Coune, administrator at the Lake Harriet Spiritual Community in Minneapolis, said Damond came to Minneapolis about three years ago, and she had been teaching and speaking at the center for more than two years.

Damond’s mother was Australian, and she spent her formative years there, but also spent some of her early childhood in the Buffalo, New York, area, said Peter Suffoletto, a cousin of Damond’s father.