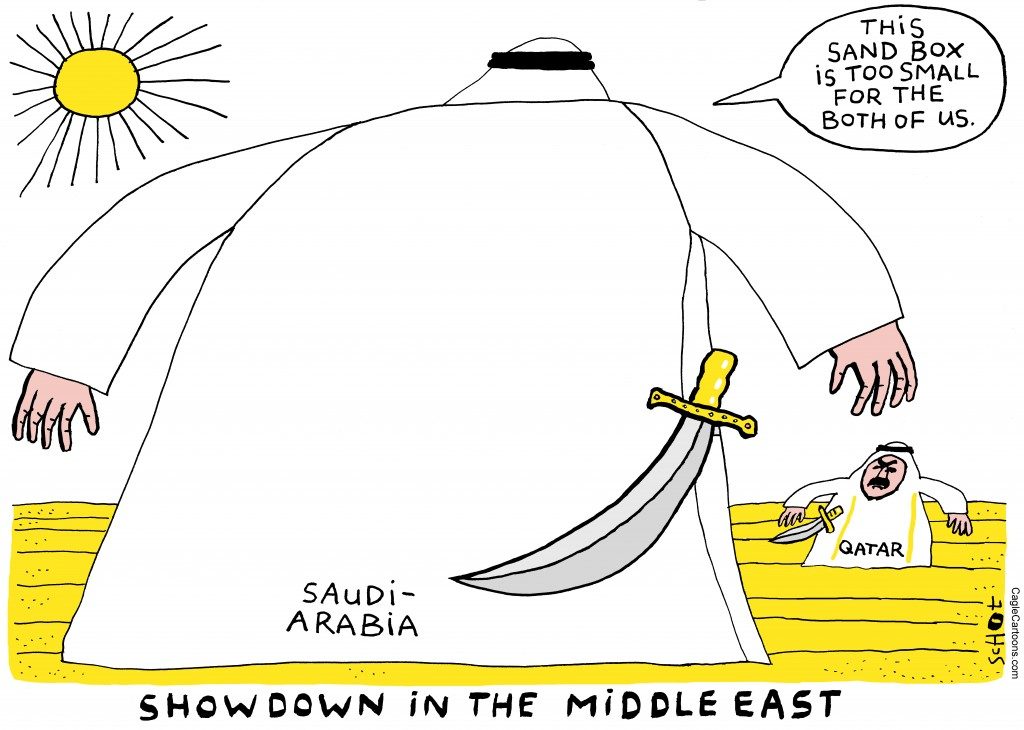 Right off the bat, let’s get one thing straight: It’s pronounced something like “gutter,” with the stress on the first syllable and the “g” a bit harder than the one in that English word, though not as hard as the “c” in “cutter.”

When it comes to Qatar’s current geopolitical situation, though, things are more complicated.

The small country, which juts out like a sore thumb from the Arabian Peninsula into the Persian Gulf, has been effectively put into cherem by the Gulf Cooperation Council (GCC), a consortium of nearby countries consisting of Bahrain, Egypt, Saudi Arabia, and the United Arab Emirates. Saudi Crown Prince Mohammed bin Salman is widely seen as the force that spearheaded that economic excommunication, making the accusation that Qatar is aiding terrorist groups.

The GCC made 13 demands on its neighbor, including ending its relations with Iran and closing down the Al-Jazeera broadcasting station, all of which conditions, as was expected, Qatar ignored. Neither side is expected to back down any time soon.

In an Arabian example of the law of unintended consequences, the boycott of Qatar has only driven it further into an economic alliance with Iran, to the benefit of the latter.

The U.S. position on the intra-Arab crisis has been somewhat less than consistent. President Trump, perhaps with visions of his festive reception in Saudi Arabia back in May still dancing in his head, quickly tweeted his backing for the Saudi-led effort: “During my recent trip to the Middle East I stated that there can no longer be funding of Radical Ideology. Leaders pointed to Qatar — look!”

Well, the Departments of State and Defense did, and, surprised at not having been consulted by the Commander in Chief, seem to have explained to him that Qatar is the (relatively) good guy in the fight. The President subsequently phoned the Qatari emir to offer his help in resolving the crisis, even proposing that a summit of leaders of the blockading countries and Qatar be held at the White House. This month, in fact, culminating year-long negotiations with Qatar by the State and Defense Departments, the U.S. and Qatar signed a memorandum of understanding regarding the fight against terrorism.

Qatar’s no angel, to be sure. It maintains a cozy relationship with the Muslim Brotherhood, which, despite its renunciation of violence several years ago, remains a force for promoting Islamist extremism. And Qatar hosts the leadership of Hamas, implicating the country in the terror group’s murderous attacks on Israelis.

But the Saudis’ claim to be the regional bulwark against terrorism is itself something of a bad joke.

As Senator Bob Corker, who serves as chairman of the Senate Foreign Relations Committee, said recently: “The amount of support for terrorism by Saudi Arabia dwarfs what Qatar is doing.”

While there is no evidence that the Saudis directly fund terrorist groups, Saudi Arabia is the “foremost” foreign funder of Islamist extremism in the U.K., according to a just-released report from a British think tank, The Henry Jackson Society.

It estimates that the Saudi government and charities spent an estimated $4 billion exporting Saudi Arabia’s harsh interpretation of Islam, known as Wahhabism, worldwide in 2015, up from $2 billion in 2007. In 2015, there were 110 mosques in the U.K. practicing Wahhabism, compared to 68 in 2007. The money is primarily funneled through mosques and Islamic schools in Britain, according to the report.

“Influence has also been exerted through the training of British Muslim religious leaders in Saudi Arabia,” the report noted, “as well as the use of Saudi textbooks in a number of the U.K.’s independent Islamic schools.”

The Saudi embassy said that the claims made by the report were “categorically false,” which should reassure no one at all.

The Saudis, moreover, have been funding mosques throughout Europe that have become hotbeds of extremism, according to former British ambassador to Saudi Arabia Sir William Patey.

According to people in the know like Sir William, terrorism isn’t really a concern of the Saudis. The royal family simply fears a scenario where the Muslim Brotherhood could foment political upheaval in the kingdom. If Islamists want to blow up Western targets, well, that’s unfortunate, but it’s not what keeps the princes up at night.

And so, we have Qatar with its Muslim Brotherhood and Hamas connections; and Saudi Arabia with its global Wahhabi “outreach.”

But there’s some solace to be taken here, in the fact that the bellicose neighbors are being kept nice and busy fighting only among themselves.