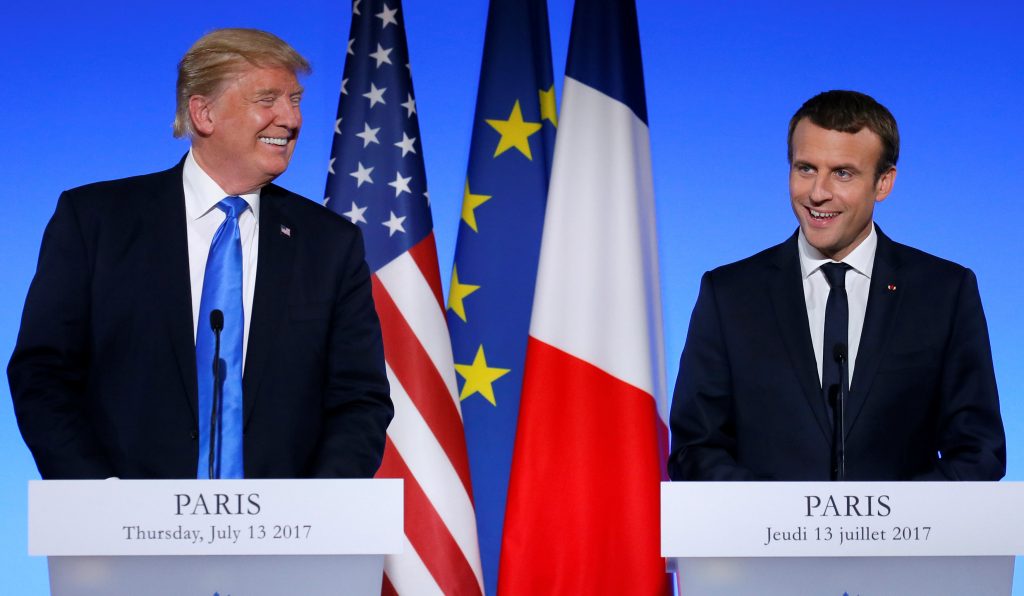 French President Emmanuel Macron said on Thursday that it is “obvious and indispensable” to have exchanges with U.S. President Donald Trump as the two leaders were set to meet to try to push past major differences and find common ground on security, defense and other issues.

Macron spoke at a news conference following a meeting in Paris with German Chancellor Angela Merkel who, like Macron, was deeply disappointed in Trump’s recent decision to withdraw the U.S. from a global agreement to combat climate change.

Merkel said differences with the U.S. are “regrettable” but that communication continues.

President Trump arrived in the French capital on Thursday after an overnight flight from Washington for a whirlwind, 36-hour visit to meet with Macron and tackle potential solutions to the crisis in Syria and discuss broader counterterrorism strategies. Macron and his wife, Brigitte, greeted Trump and first lady Melania Trump at Les Invalides, site of Napoleon’s tomb. Macron led Trump on a tour before they drove a short distance to the French presidential palace for their talks.

Trump planned Friday to participate in Bastille Day celebrations and commemorate the 100th anniversary of the U.S. entry into World War I before returning to Washington.

The president’s decision last month to withdraw the U.S. from the Paris climate accord sparked outrage across Europe, and anti-Trump protests are planned while he is in Paris. Macron, a staunch advocate of research to combat global warming, has beckoned “all responsible citizens,” including American scientists and researchers, to bring their fight against climate change to France. Trump said the climate deal was unfair to the U.S.

Trump, Merkel, Macron and other leaders huddled last week in Hamburg, Germany, during a summit of the world’s leading rich and developing nations. Merkel and Macron met again Thursday in Paris, before Macron’s meeting with Trump. Trump and Merkel were not expected to meet.

Merkel said during a joint appearance with Macron that it’s important to keep talking with Trump even where the differences are clear. She said last week’s summit showed that common ground exists, for example, on fighting terrorism, but that “we also had to name clear differences, for instance, regrettably the difference on whether we need the Paris climate accord or not.”

She added, “We did not paper over these differences, but nevertheless, contact — the ability to speak — is of course important.”

Macron said that Germany and France agree on the importance of close ties with the United States, despite the differences.

Trump and Macron also planned a joint news conference Thursday after their talks, where Trump may be asked to respond to Merkel and to questions about e-mails showing that his eldest son, Donald Trump Jr., welcomed the prospect of receiving Russian government support in last year’s presidential campaign between his father and Hillary Clinton.

Trump defended his son Wednesday, praising his performance in a Fox News Channel interview. Trump tweeted, “He was open, transparent and innocent. This is the greatest Witch Hunt in political history. Sad!”

The visit to Paris could offer Trump a brief distraction from the controversy. He will mark the 100th anniversary of America’s entry into World War I by visiting U.S. troops. He’ll also be the guest of honor at Friday’s Bastille Day events — a celebration of French national pride. White House officials are casting it as a celebration of the U.S.-French military alliance — both then and now.

The leaders and their wives will cap Thursday with a lavish dinner at the Jules Verne restaurant in the Eiffel Tower.

Trump is visiting a city he has repeatedly disparaged. When he announced his decision on the climate agreement, Trump said he was “elected to represent the citizens of Pittsburgh, not Paris.” And he’s repeatedly said the city has been ruined by the threat of terrorism, which he ties to immigrants.

“Paris isn’t Paris any longer,” he said in February.

But counterterrorism issues give Macron and Trump the potential for a strong working relationship.

Macron’s national security pitch hasn’t differed drastically from Trump’s. On Syria, he argues for intervention, saying that President Bashar Assad is a threat to Syria and the Islamic State group is a threat to France. France has been plagued in recent years by extremist attacks. During last year’s Bastille Day celebrations, a 19-ton cargo truck deliberately plowed into crowds in Nice, killing more than 80 people.

Macron supports intervention against Syria’s government in response to its use of chemical weapons and could prove an important ally as the Trump administration seeks to increase pressure against Assad. But in doing so, they’ll need to tackle the issue of Russia’s support for Assad, something Mr. Trump has only passively acknowledged.