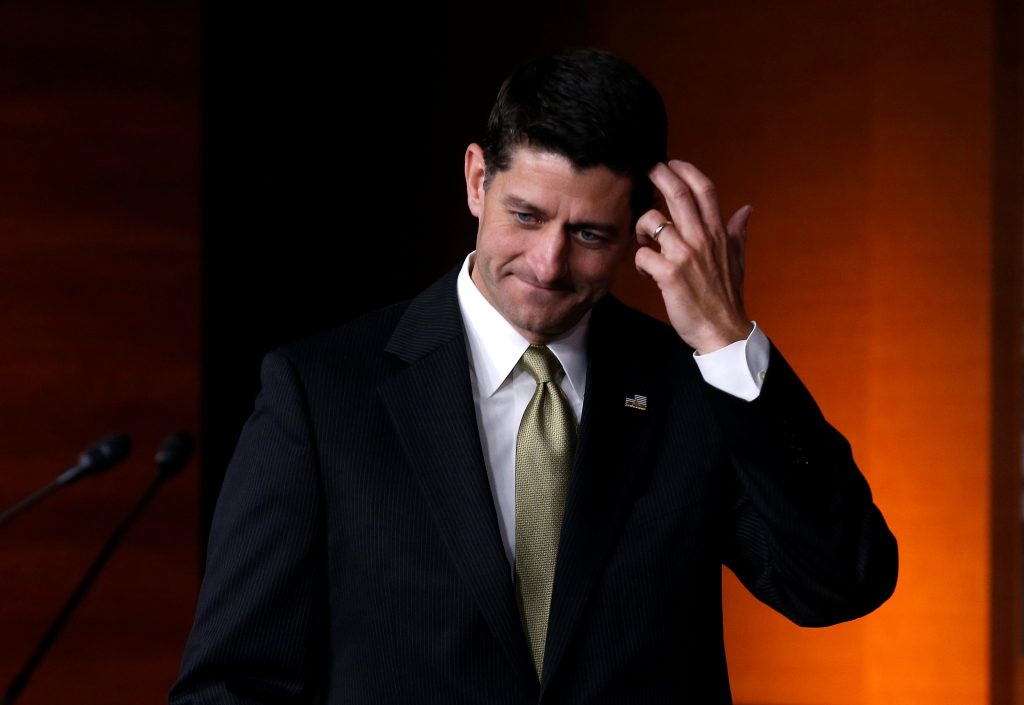 Emails released by President Donald Trump’s eldest son detailing communications with Russians have provoked a collective shrug from many Republicans in Congress.

Scant new concern was evident from Republican leadership on down, despite the revelation of an email chain showing that Pres. Trump’s son eagerly accepted help from what was described to him as a Russian government effort to aid his father’s campaign.

On Wednesday, a day after Donald Trump Jr. released the emails himself, House Speaker Paul Ryan said it was unacceptable that Russia meddled in the elections but deflected specific questions. He cited the Department of Justice’s special counsel and congressional investigations.

“I think it’s very important that these professionals in these committees do their jobs so that we can get to the bottom of all of this,” Ryan said.

Senate Majority Leader Mitch McConnell did the same on Tuesday.

“The investigation in the Senate’s being handled by the Intelligence Committee, and I’m sure they’ll get to the bottom of whatever may have happened,” McConnell, R-Ky., told reporters asking about his views on the matter.

McConnell gave similar responses when asked whether he still trusts the president on Russia issues, and whether he himself regrets not taking action after getting briefed last fall, along with other high-level House and Senate lawmakers of both parties, about Russia’s attempted meddling in the U.S. election.

Trump Jr., along with several White House officials, has repeatedly denied any collusion with anyone tied to the Russian government. But the emails he posted on Twitter — shortly prior to publication by The New York Times — indicated that members of the president’s inner campaign circle met with Russians whom they knew wanted Trump to prevail.

U.S. intelligence agencies have said the Russian government meddled in the election to aid Trump. Although the president himself has yet to fully embrace that conclusion, investigations are under way by the House and Senate intelligence committees as well as the special counsel appointed by the Justice Department, Robert Mueller.

As the story has developed, most congressional Republicans have downplayed new news and deferred to the investigations under way. Tuesday was no different, despite attempts by minority Democrats to stoke outrage.

“One of the things that endears the president to me is how nice his children are. And they all love him. So, and he divorced their mothers, and they love him,” Hatch said.

Democrats were predictably furious. The top Democrat on the House Intelligence Committee, California Rep. Adam Schiff, said the emails are “obviously very significant, deeply disturbing, new public information about direct contacts between the Russian government and its intermediaries and the very center of the Trump family, campaign and organization.”

But the Democrats have little leverage. Many Republicans’ reluctance reflects their constituencies’ strong support for the president — and lack of interest for the Russia story.

“President Trump is the greatest thing that has happened to this country,” Alabama Sen. Luther Strange, who faces a primary challenge Aug. 15, recently told a county GOP executive committee. “I consider it a … miracle that he’s there.”

Most Republicans who did comment were careful. GOP members of the Senate Intelligence and Judiciary committees said they want more evidence before they make judgments.

“The emails certainly raise questions,” said Maine Sen. Susan Collins. “But we’re seeing only part of the picture, which is why I want to fill in all of the other pieces before reaching any kind of conclusions.”

Emerging from a closed Intelligence panel meeting, Sen. Roy Blunt of Missouri said he’d like to ask Donald Trump Jr., “Why were you there and what did you expect to accomplish by being there?” But he added, “there’s no reason to jump to conclusions here.”

Texas Sen. John Cornyn, the No. 2 Republican in the Senate, said “I don’t know exactly what happened, I’d like to know the whole story.” He said it’s likely Trump Jr. will be called before the Intelligence panel.

Sen. Lindsey Graham, R-S.C., who ran against Trump in the election, was characteristically blunter.

“If you’re ever approached about meeting up with a foreign government, the answer is no,” he said.