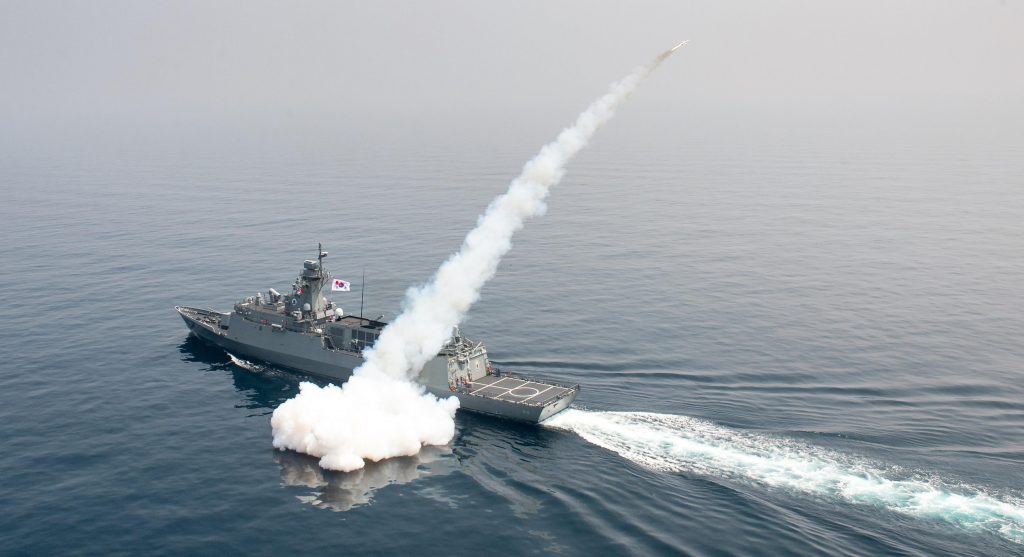 South Korean jets and navy ships fired a barrage of guided missiles into the ocean during drills Thursday in a display of military power two days after North Korea test-launched its first intercontinental ballistic missile.

The North’s ICBM launch, its most successful missile test to date, has stoked security worries in Washington, Seoul and Tokyo as it showed the country could eventually perfect a reliable nuclear missile capable of reaching anywhere in the United States. Analysts say the missile tested Tuesday could reach Alaska if launched at a normal trajectory.

The live-fire drills off South Korea’s east coast were previously scheduled. In a show of force, South Korea and the United States also staged “deep strike” precision missile firing drills on Wednesday as a warning to the North.

Thursday’s drills were aimed at boosting readiness against possible maritime North Korean aggression. They involved 15 warships including a 3,200-ton-class destroyer, as well as helicopters and fighter jets, South Korea’s navy said in a statement.

“Our military is maintaining the highest level of readiness to make a swift response even if a war breaks out today,” said Rear Adm. Kwon Jeong Seob, who directed the drills, according to the statement.

After the ICBM launch, North Korean leader Kim Jong Un said he would never put his weapons programs up for negotiation unless the United States abandoned its hostile policy toward the North. Kim’s statement suggested he will order more missile and nuclear tests until his country develops a functioning ICBM that can place the entire U.S. within its striking distance.

In a U.N. Security Council session Wednesday, U.S. Ambassador Nikki Haley said the launch “is a clear and sharp military escalation” and the United States is prepared to use its “considerable military forces” to defend itself and its allies “if we must.” She said the U.S. administration prefers “not to go in that direction,” but to use its “great capabilities in the area of trade” to address “those who threaten us and … those who supply the threats.”

Speaking in Berlin before the Group of 20 summit, South Korean President Moon Jae-in said Wednesday that the world should look at tougher sanctions against the North and insisted the problem must be solved peacefully.

The missile launch was a direct rebuke to President Donald Trump’s earlier declaration on Twitter that such a test “won’t happen!” and to Moon, who was pushing to improve strained ties with the North.

The U.N. Security Council could impose additional sanctions on North Korea, but it’s not clear they would stop it from pursuing its nuclear and missile programs since the country is already under multiple rounds of U.N. sanctions for its previous weapon tests.