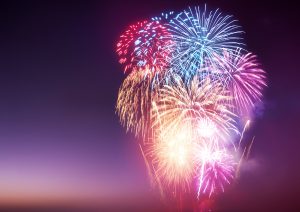 Tuesday’s festivities stretch from a baseball home run derby in London to a picnic at the White House to a Utah ski town where residents initially weren’t even sure they’d be home for Independence Day after recent wildfires.

For all the pomp and celebration, July Fourth arrives with Americans deeply split over the nation’s direction, after last year’s presidential election and political clashes over immigration, health care and other issues in the early months of Trump’s Republican administration. And in an era of concerns about security, the Independence Day celebrations are mixed with precautions.

Some highlights from around the world:

Lighting Up the Skies

In New York, throngs are expected to watch the annual Macy’s fireworks show, which involves 60,000 shells launched from up to five barges on the East River.

Organizers of Chicago’s Independence Day celebration are expecting such large crowds that the city’s Navy Pier is opening at 10 a.m., nearly 12 hours before fireworks begin. Hundreds of thousands of people also are expected Boston’s fireworks show and Boston Pops concert.

A First for the President

Denmark hosted the Rebild Festival, considered one of the largest Fourth of July celebrations outside the United States. Danish Foreign Minister Anders Samuelsen – who recently tweeted that Trump “should tighten up, focus on the struggle for freedom and show respect for the presidency” in response to Trump’s own Twitter habit – told festival-goers that “when you are friends, you have the right to criticize.”

Samuelsen added, however, that it is “impossible” to live without the United States.

More than 15,000 new citizens will be sworn in during more than 65 Independence Day-themed naturalization ceremonies across the country. They are taking place in locales ranging from courthouses to parks to aircraft-carriers-turned-museums.

The New York Police Department plans to station 100 vehicles to block intersections and 20 sand-filled sanitation trucks to fortify viewing areas for the Macy’s fireworks show. Heavily armed counterterrorism units will mingle among spectators, officers will have portable radiation detection devices and bomb-sniffing dogs, and officers will be stationed on rooftops to look out for any sign of trouble.

Boston police also plan to put trucks and other heavy equipment near the celebration there. Police in both cities say there are no confirmed threats.

In a somber observance of the toll of terror, small American flags were placed by all the nearly 3,000 names on the National Sept. 11 Memorial in New York on Tuesday morning.

Home for the Holiday

Residents of the southern Utah ski resort town of Brian Head were planning a fireworks-free celebration, having returned home just this past Friday after a wildfire forced evacuations in the town two weeks earlier.

“None of us even knew if we were going to be open for the Fourth of July,” Brian Head Resort spokesman Mark Wilder said.

The alpine town is near several national monuments and parks in Utah’s red rock country. Brian Head is normally filled with vendors selling crafts and food on the holiday, one of the biggest celebrated at the resort and the start of the area’s festival season, Wilder said.

But he said the town has suspended its fireworks show this year because the area is still too dry and ripe for fires.

“I’m sure people are disappointed with that, but better safe than sorry,” Wilder said.

Meanwhile, at California’s Squaw Valley ski resort, skiers were poised to enjoy a rare July Fourth on the slopes. It’s only the fourth time the resort has ever been open in July.

This article appeared in print in the July 5th, 2017 edition of Hamodia.