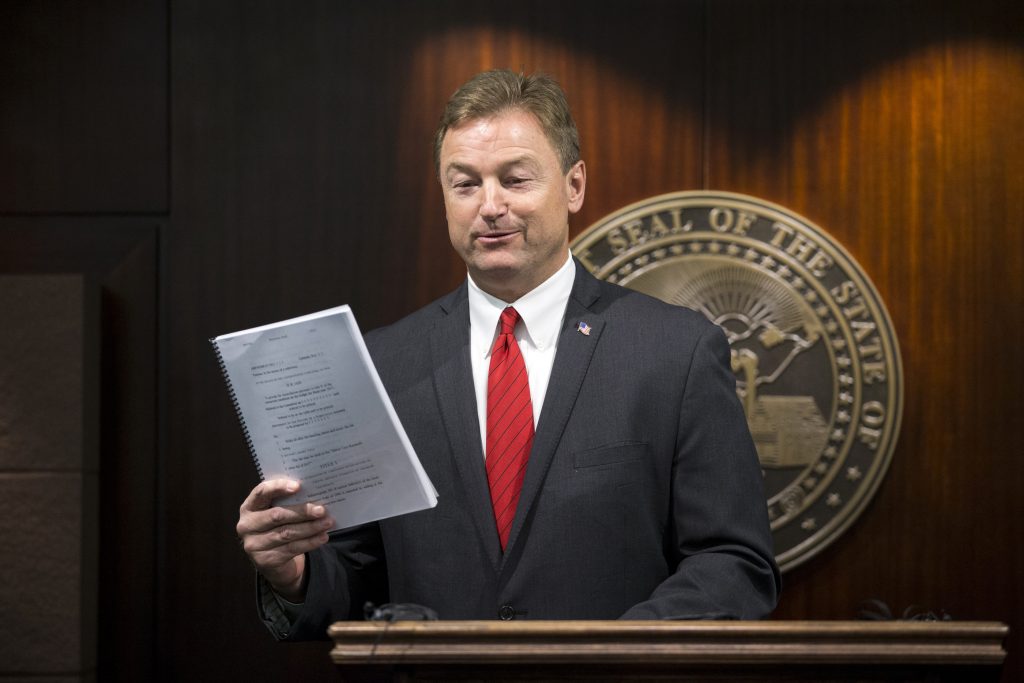 Senate Majority Leader Mitch McConnell, R-Kentucky, is working to win over Republican holdouts on his health-care bill after facing a revolt from conservatives and moderates who weren’t ready to act this week.

Some of the holdouts may be easier to persuade than others. A few announced their opposition to his draft bill only after he delayed a planned vote. But others are more dug in.

Several conservatives say the bill doesn’t go nearly far enough in dismantling Obamacare. Moderates worry about the phaseout of the Medicaid expansion, as well as the Congressional Budget Office estimate that 22 million fewer Americans would have health care in a decade under the bill, H.R. 1628.

Republicans started closed-door talks on possible changes Wednesday, following a meeting with President Donald Trump a day earlier. The aim is to produce a deal by Friday so the nonpartisan Congressional Budget Office can use next week’s July 4 recess to produce a new analysis that will be crucial in rounding up the 50 votes needed to pass the bill.

Here’s a look at the independent-minded senators from the Republicans’ conservative and moderate wings who may be McConnell’s most difficult targets:

The first-termer from Nevada took the strongest stand against the bill. He stood with popular Gov. Brian Sandoval, R, at a news conference Friday to oppose the measure because it would cut billions from Medicaid and reduce subsidies for people buying insurance on the individual market. Heller is the Republican considered most at risk of losing re-election in 2018, after winning his seat with only 46 percent of the vote. A switch to supporting the bill would be tough because Democrats would dog him with it all the way to Election Day.

In a tele-town hall Tuesday, Heller told constituents it would be hard to “get to yes,” according to the Nevada Independent. He has backed Sandoval’s decision to accept the expansion of Medicaid under Obamacare, which made Nevada one of a cluster of Republican-led states that would lose under the GOP bill’s phaseout of the extra Medicaid funds. Sandoval said Wednesday that the state is in a “crisis” after Anthem Inc.’s decision to stop offering Obamacare plans in much of the state, leaving some residents without options on the health law’s exchanges.

A leader of Senate moderates, she has questioned the proposal’s Medicaid cuts and its repeal of Obamacare’s 3.8 percent tax on the wealthy. Collins, of Maine, is among the pivotal senators who were left out of the 13-member working group that helped work on McConnell’s plan.

She tweeted Monday that the bill won’t fix the Affordable Care Act’s problems affecting rural Maine, particularly struggling hospitals that would be affected by $772 billion in Medicaid cuts over a decade. One in five people in Maine rely on Medicaid, she said

Other Republicans in Congress are determined to end the Obamacare tax on high-income Americans. Leaving a private Senate GOP meeting Wednesday, Collins said it would be “very difficult” to reach a deal by the end of the week.

Arguably the most independent-minded Senate Republican, the Alaskan won re-election in 2010 as a write-in candidate against a tea party rival who beat her in the GOP primary. As in the current health-care debate, she staked her reputation on her ability to get the best deals for her home state.

Health insurance premiums are more costly in Alaska than in any other state, and Murkowski has expressed concern about cuts in Medicaid and aid for people who buy individual insurance policies. She says it’s vital to provide strong protection for people with pre-existing conditions. Despite her concerns, she’s still in the game. She was spotted leaving McConnell’s office with fellow Alaska Sen. Dan Sullivan, R, on Wednesday. She was mum on their Alaska-specific conversation, describing the meeting as “good.”

The tea party maverick is probably more ideologically opposed to the measure than any other Republican. He has called repeatedly for a full repeal of Obamacare rather than the McConnell bill, which he sees as a significant government intrusion into health care.

He opposes some approaches backed by many Republicans, including a $50 billion fund over four years to stabilize insurance exchanges and cost-sharing subsidy payments for insurers through 2019. He also rejects a “continuous coverage” provision designed to give healthy people an incentive to buy insurance.

“Right now, the moderates have been given everything,” he complained, even as his opposition landed him a private audience with Trump on Tuesday.

The small-government stalwart from Utah has called McConnell’s plan a “caricature of a Republican health-care bill.” He initially participated in McConnell’s working group but dropped out after he grew dissatisfied with its direction. He wants to loosen Obamacare’s consumer protections, an action he and other conservatives like Paul, Texas’s Ted Cruz and Wisconsin’s Ron Johnson say could help hold down the cost of premiums.

Lee proposes letting states opt out of community-rating requirements, which bar insurers from charging dramatically more to people with serious illnesses. He also wants insurers who qualify for the Obamacare market to be able to offer an unregulated plan as well. It’s unclear whether such a provision would lose other senators’ support or violate Senate rules for a streamlined process for passing the bill.

The doctor from Baton Rouge, Louisiana, is perhaps the most pragmatic Republican holdout because he brought his experience as a medical provider into the talks. He co-sponsored his own Obamacare replacement proposal with Collins, but they found no takers among Democrats, and GOP leaders ignored them.

The Ohio senator is a leading voice for Republicans from states that expanded their Medicaid coverage under Obamacare. He worked with West Virginia’s Shelley Moore Capito on a plan to allow a seven-year phase-out of the expansion.

McConnell’s plan provides only a three-year phase-down, and talks on Medicaid funding are continuing. Portman and Capito also seek $45 billion over 10 years for opioid addiction, while the bill includes only $2 billion. Leaders have said that’s a placeholder, and McConnell has about $200 billion in financial wiggle room that will let him address some lawmakers’ concerns.

Ohio Gov. John Kasich, R, called the Senate bill “unacceptable” this week. He said seeking opioid funds is “like spitting in the ocean,” compared with the effect of proposed Medicaid cuts on Ohio. Portman could still get Medicaid concessions, and the fact that he safely won re-election in 2016 and won’t have to face voters for a while keeps him in play.