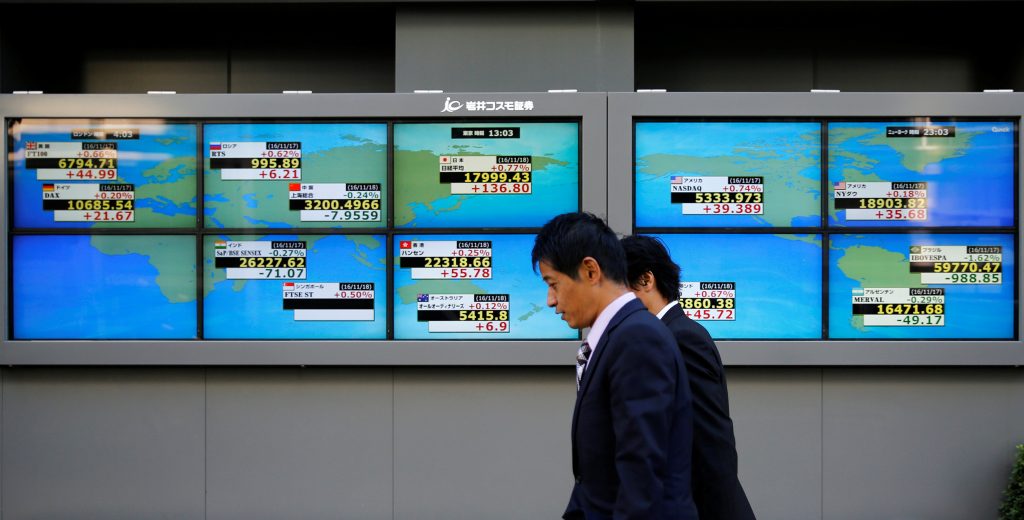 Asian shares slumped on Wednesday after Wall Street was knocked hard in the wake of a delay to a U.S. health-care-reform vote, while the euro rallied after European Central Bank President Mario Draghi hinted that the ECB could trim its stimulus this year.

MSCI’s broadest index of Asia-Pacific shares outside Japan was down 0.4 percent, pulling further away from more than two-year highs probed earlier this week. On Monday, it touched its highest level since May 2015

“We’ve had a pretty good run,” said Sean Darby, chief global equity strategist at Jefferies. “I suspect what people have owned has done very well, and they want to sell some of those positions.”

Japan’s Nikkei share average ended down 0.5 percent, facing headwinds from the dollar’s reversal of its rise against the yen. But the banking and insurance sectors outperformed on expectations of higher rates.

The yield on U.S. Benchmark 10-year Treasury notes stood at 2.213 percent in Asian trade, above its U.S. close of 2.198 percent on Tuesday. It rose from 2.14 percent late on Monday after Federal Reserve chief Janet Yellen said that it is appropriate to gradually raise U.S. rates.

On Tuesday, the benchmark S&P 500 posted its biggest one-day drop in about six weeks and closed at its lowest point since May 31, after the U.S. Senate’s move to delay voting on a health-care-reform bill rekindled worries on the timeline for President Donald Trump’s business-friendly policies.

U.S. stocks accelerated their losses after Senate Republican leader Mitch McConnell decided to put off a planned vote on a bill to dismantle the Affordable Care Act until after the Senate’s July 4 recess, to get more time to garner sufficient votes for its passage.

The dollar index, which gauges the U.S. currency against a basket of six major counterparts, edged down 0.1 percent to 96.300, well below its previous session high of 97.447.

The euro was up 0.5 percent at $1.13610 after rising to a one-year high of $1.13665 after Draghi, speaking at a conference in Portugal, said the ECB could adjust its policy tools as economic prospects improve in Europe.

Some strategists said that once the dust settled from the impact of his comments, the euro could give back some of its gains.

“To me, it seems the change in policy will not be very substantial, so I think in the coming days, ECB officials will try to water down Draghi’s comments,” said Masafumi Yamamoto, chief forex strategist at Mizuho Securities in Tokyo.

The greenback slumped against the Canadian dollar after Bank of Canada Governor Stephen Poloz told CNBC in an interview that it looks as if the central bank’s rate cuts have done their job. The U.S. dollar was down 0.4 percent at C$1.3144, after plumbing its lowest levels since February.

Crude oil futures gave back some of their overnight surge. Prices rose nearly 2 percent on Tuesday on the weaker dollar, short-covering and expectations that U.S. crude inventories might decline for a third consecutive week.