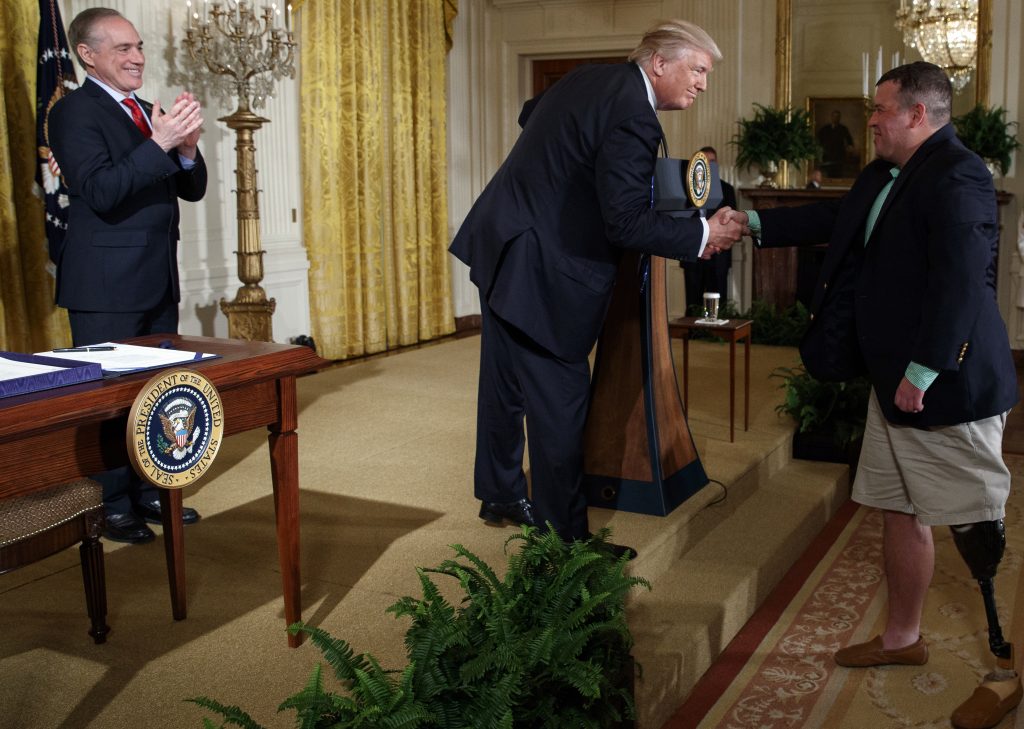 President Donald Trump fashions himself as a fighter on behalf of America’s veterans – so much so that he mimed firing his Veterans Affairs secretary should he fail to successfully implement new reforms at the long-plagued Department of Veterans Affairs.

At a ceremony in the East Room of the White House Friday as he signed the VA Accountability and Whistleblower Protection Act, Trump said, “I have no doubt it will be properly implemented.”

Smiling, Trump responded, “Better be, David, or …” He then made a pistol with his right hand, aimed it at Shulkin and mouthed his signature words: “You’re fired!”

The audience of administration officials, lawmakers, and veterans and their families laughed at the president’s joke.

Trump was being playful, of course, though it is hardly the first time he has joked in public about firing one of his subordinates.

The law Trump signed is one of the first legislative victories for the Trump administration and is designed to bring a new level of accountability to the department after some veterans died in 2014 while waiting for care at a VA medical center in Phoenix. The new law allows the department to take swift action to fire and discipline problem employees, among other measures.

“What happened was a national disgrace, and yet some of the employees involved in these scandals remained on the payrolls,” Trump said. “Outdated laws kept the government from holding those who failed our veterans accountable. Today we are finally changing those laws.”

Trump added, “It’s a reform that I campaigned on, and now I am thrilled to be able to sign that promise into law. VA accountability is essential to making sure that our veterans are treated with the respect they have so richly earned through their blood, sweat and tears.”