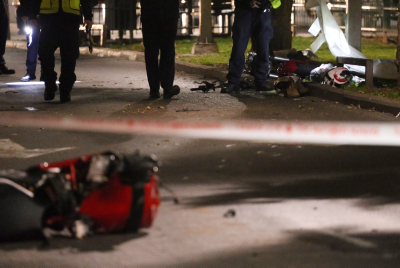 A Rishon Lezion court has released to house arrest the Arab truck driver who struck and killed attorney Elkana Bishitz, z”l. Bitshitz, an Orthodox lawyer who represented many people and organizations in the religious and chareidi community, was killed Tuesday on Road 443 when the truck hit him. An avid motorcyclist, Bishitz was riding his ‘cycle when a large truck advanced on him quickly, and he was unable to get out of the way before he was hit.

Police arrested the driver on suspicion of negligence, and investigated the possibility that the incident was a car-ramming attack. However, it was decided that there was not sufficient evidence for those charges, and the driver was released. His license has been temporarily suspended, and he will remain confined to his home for 30 days. He also was ordered to post bond and fees of NIS 20,000.

Bishitz, 41, left behind him a wife and four children. Hundreds of people attended his levayah. A resident of Givat Shmuel, Bishitz, who grew up in Bnei Brak, was known in the community for many acts of chessed, assisting families to receive money owed them by government and corporations, and ensuring that charity funds received the proper tax exemptions and legal protections.