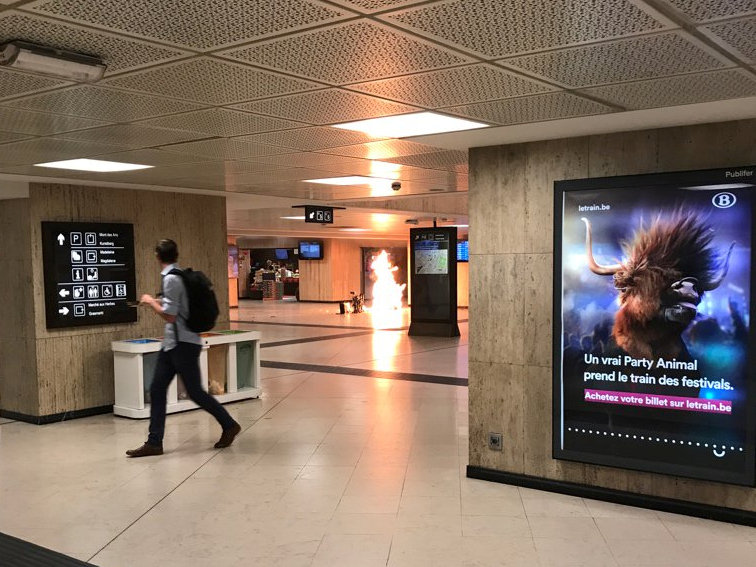 Belgian authorities said they foiled a terror attack Tuesday when soldiers shot and killed a suspect after a small explosion at a busy Brussels train station that continued a week of attacks in the capitals of Europe.

Federal prosecutor Eric Van der Sypt said soldiers “neutralized” a male suspect at the Central Station immediately after the explosion there on Tuesday night. The man lay still for several hours while a bomb squad checked whether he was armed with more explosives.

Prosecutor’s spokeswoman Ine Van Wymersch confirmed his death early Wednesday and said no other explosives were found on his body. Some Belgian media had reported earlier that the suspect was wearing a bomb belt.

Belgium’s Crisis Center, which monitors security threats in the country, said that based on initial information, it did not see a need to raise the country’s terror threat to the highest level, and kept it at the second-highest level.

Authorities set up a wide perimeter around the station, located near the city’s famed Grand Place square.

Van der Sypt said no one else was injured besides the suspect and the damage from the explosion was limited. The attack, which took place during a rare heatwave in Belgium, came around 8.30 p.m., well after the evening rush hour had dissipated.

Nicolas Van Herreweghen, who works for Belgium’s national rail company, said the male suspect was very agitated, yelling about jihadists and then “All-ahu akbar,  before blowing up something on a baggage trolley.

The government agency that owns Belgium’s railways was warned by a train driver who saw people running across the rail lines inside the station, spokesman Arnaud Reymann told broadcaster RTL.

Photos posted on social media showed a small fire in the station.

The Belgian capital, home to the headquarters of NATO and the European Union, has been on high alert since a Brussels-based Islamic State cell launched an attack that killed 130 people in Paris in November 2015. In March 2016, associates of those terrorists killed 32 people in Brussels in an attack on the train station and airport.

The Central Station is one of the busiest in the nation and soldiers could be seen patrolling there after the explosion. It was evacuated along with the Belgian capital’s Grand Place, a major tourist site about 200 meters (656 feet) away.

Rail company spokeswoman Elisa Roux said Tuesday evening that trains were diverted from the station and buses sent out to take passengers to the area.