Oil Tankers Store Most Oil This Year as Glut Continues 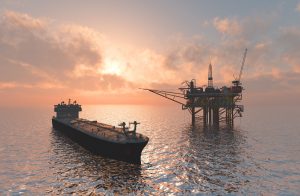 Oil traders are resorting to storing more and more oil at sea amid swelling output in the Atlantic region, a sign the market is far from the kind of re-balancing that OPEC would have hoped for when the group set out last year to bring down global stockpiles.

The amount of oil stored in tankers reached a 2017 high of 111.9 million barrels earlier this month, according to Paris-based tracking company Kpler SAS. Higher volumes of storage in the North Sea, Singapore and Iran account for most of the increase.

The build-up occurs even as the Organization of Petroleum Exporting Countries and 11 other nations led by Russia cut supplies. Since the beginning of the year, those nations have attempted to trim nearly 1.8 million barrels a day from the market, though higher output in the U.S. and Africa and sluggish demand in Asia have all helped to undermine their efforts.

“If anything, it shows that OPEC cuts still aren’t having enough of an impact,” Olivier Jakob, managing director of consultant Petromatrix GmbH, said of the buildup at sea. “The pressure is coming from the Atlantic Basin,” where there are additional supplies, he said.

Companies including Trafigura Group and Vitol Group have recently chartered older supertankers for as long as eight months, and some of the vessels are likely to be used for floating storage, according to a research note Monday from Pareto Securities AS.

As a result of the persisting surplus, spot prices for oil are being pushed lower than those for supplies months and years into the future. Such a structure, known as contango, can make it profitable for traders to store oil in tanker ships for delivery later, although data compiled by Bloomberg and E.A. Gibson Shipbrokers Ltd. indicate that’s not the case yet.

As recently as May 1, the average volume was about 74 million barrels, according to Kpler. Floating storage in Singapore has risen by 23 percent this year and 32 percent in the North Sea, it estimates.

The return of West African and Libyan crude “could be a reason for the build in the North Sea,” said Jorge Antequera, a crude oil market analyst at Kpler. Because the Brent benchmark is priced in that region, “even if it’s a small build, it will have a significant impact on oil prices.”

Earlier this month, Royal Dutch Shell Plc lifted export restrictions on Nigeria’s Forcados crude, which had been shut in for more than a year after a militant attack on a sub-sea pipeline. Forcados exports are now expected to average about 285,000 barrels a day in August, almost a quarter of the volume that OPEC has pledged to cut from the market.

In addition, Libya’s biggest oil field, Sharara, has restarted after intermittent halts and is now pumping about 270,000 barrels a day, the level before a recent shutdown, according to the state-run National Oil Corp. Libyan output is the highest since 2013 after a deal with Wintershall AG enabled at least two fields to resume production.

Tanker tracking by Bloomberg show almost 9 million barrels of key crude grades Brent, Forties, Oseberg and Ekofisk crudes are now floating on Aframax vessels and crude supertankers off the U.K.’s coasts. The tankers have been floating from less than a week to over two months. The region’s inventories on ships last increased in March, before receding again.

In the U.S., crude oil production has been on an upward trend since October, and last month it reached 9.34 million barrels a day, the highest level since August 2015. Rig counts have increased for a record 22 weeks straight as shale producers have boosted output, according to data from Baker Hughes Inc. In addition, U.S. crude exports reached a record 1.1 million barrels a day in February.

Global crude inventories are likely to decline to some extent later this year, but “a return to five-year average stock levels remains elusive for some time to come,” Morgan Stanley analysts including Martijn Rats wrote in a research note Monday. Oil in floating storage has been building at a rate of about 800,000 barrels a day since early May and continues to increase, they said. More than 52 million barrels a day have been loaded onto tankers this month, a record since at least 2012, they estimate.

While oil appears to be flowing into floating storage, estimates from E.A. Gibson and exchange data compiled by Bloomberg show that keeping barrels at sea wouldn’t normally be profitable at the moment. For three, six and 12 months, traders would lose money by storing at sea either in the North Sea, the Mediterranean, or Asia. Floating storage isn’t viable, David Martin, an analyst at JPMorgan Chase & Co., wrote in a research note.

The backup of crude in the North Sea likely won’t clear without it being discounted for buyers in Asia. “Anecdotal trade reports indicate that although Asian refinery buying has been muted in recent weeks, it is picking up momentum,” he wrote.