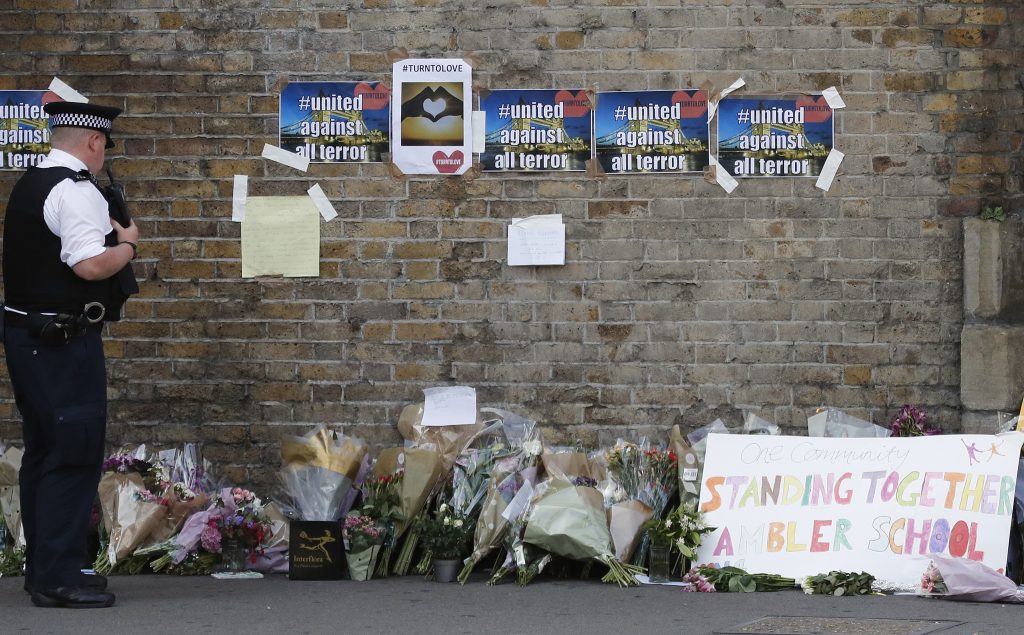 For years, Finsbury Park was considered a hotbed of Islamic extremism. A relatively deprived immigrant neighborhood in North London, it was the home of the Finsbury Park Mosque — infamous for housing the radical Egyptian cleric Abu Hamza Masri, later extradited to the United States and found guilty of terrorism charges.

But like many of its surrounding neighborhoods, the area has rapidly gentrified in recent years, arguably becoming both more diverse and tolerant at the same time. Kebab shops sit comfortably next to cafes serving flat white espressos. Finsbury Park Mosque has had its own dramatic reforms over the previous decade, too, with its extremist edges stripped away.

Yet it was in this contemporary Finsbury Park that a van plowed into a group of Muslim worshipers in the early hours of Monday morning, leaving one dead and injuring 10 others outside the nearby Muslim Welfare House. Police say the incident is being treated as a terrorist attack and witnesses say the alleged attacker shouted that he wanted to kill Muslims.

Many locals lingered until mid-morning by the cordoned-off scene, shocked not only that yet another apparent terror attack had hit Britain, but that it appeared to have targeted Britain’s Muslim community. Some expressed frustration with the police response and bristled at any association with religious extremists.

The neighborhood’s reputation for religious extremism was acquired in the 1990s, after the Finsbury Park Mosque was opened to cater to a historically Irish neighborhood’s booming Islamic community. The mosque was soon infiltrated by the charismatic extremist preacher Abu Hamza, who served as an imam from 1997 onwards and may have attracted attendees like the attempted al-Qaida “shoe bomber” Richard Reid.

“You really had a mosque there that was essentially a way station for international jihadism,” said Raffaello Pantucci, the director for international security studies at the Royal United Services Institute in London. “It was a place where people could rest, recuperate and everything else.”

Things changed after 2003, when the mosque was raided by police as part of an investigation into an alleged plot to produce ricin poison. The mosque was closed and Hamza was extradited to the United States in 2012, where he was sentenced to life in prison in after being found guilty of 11 terrorism-related charges.

Finsbury Park Mosque reopened in 2005 with a new management that sought to put this past behind it. On the mosque’s website, there’s talk of a “new era” with an emphasis on the “true teachings of Islam as a religion of tolerance, cooperation and peaceful harmony amongst all people who lead a life of balance, justice and mutual respect.”

Pantucci said this shift has largely been a success. “I don’t think we’ve seen the same sort of problems by any stretch of the imaginations,” he said. “Now, it’s just a big mosque in London.”

The mosque now claims to attract almost 2,000 worshippers and in 2014 it won a prestigious award for its services to the community, though its past links to extremism made it a target for criticism from Britain’s far right.

Part of this shift was in the context of a broader evolution of Islamic extremism in Britain, with mosques heavily surveilled and no longer the logical choice for recruitment and radicalization. But it was also the work of Muslim community leaders, in partnership with the London Metropolitan Police Service’s Muslim Contact Unit and local member of Parliament Jeremy Corbyn.

Pantucci also said that the Muslim Welfare House, aligned with the Muslim Brotherhood, had also played a significant role in helping the Finsbury Park Mosque rid itself of extremism. After Monday morning’s incident, witnesses said, the imam at this nearby Muslim center and mosque stopped worshippers from attacking the man who had been driving the truck.

“He said hand him over to the police,” said Rana. “I feel he did the right thing.”

Other members of the community had rushed to the site of the attack to help, too. Eli Feldman, a 29-year-old Orthodox Jew who lives in nearby Stamford Hill, said he had headed over early in the morning after hearing what had happened. “We live together with the Muslim community,” he said. “What the terrorists want is to divide, but we actually came to support.”

Later in the morning, a woman who gave her name as Allison and said she was a retired school teacher, arrived with a homemade sign that read, “Leave our Muslim neighbors alone.”

Allison said that she had lived in Finsbury Park for at least 35 years and seen the neighborhood change over time. “I feel really hurt that this has happened near here and very angry, really,” Allison said. “This is not a war. It’s just idiots.”

But some worried that the attack would still cause further problems for Finsbury Park’s Muslim community during the month of Ramadan.

“Everyone’s focused on spiritual upliftment,” said Ahmed. “This time next week we should be celebrating Eid. It should be a joyous occasion and a celebration. Now it’ll turn into a really somber day.”