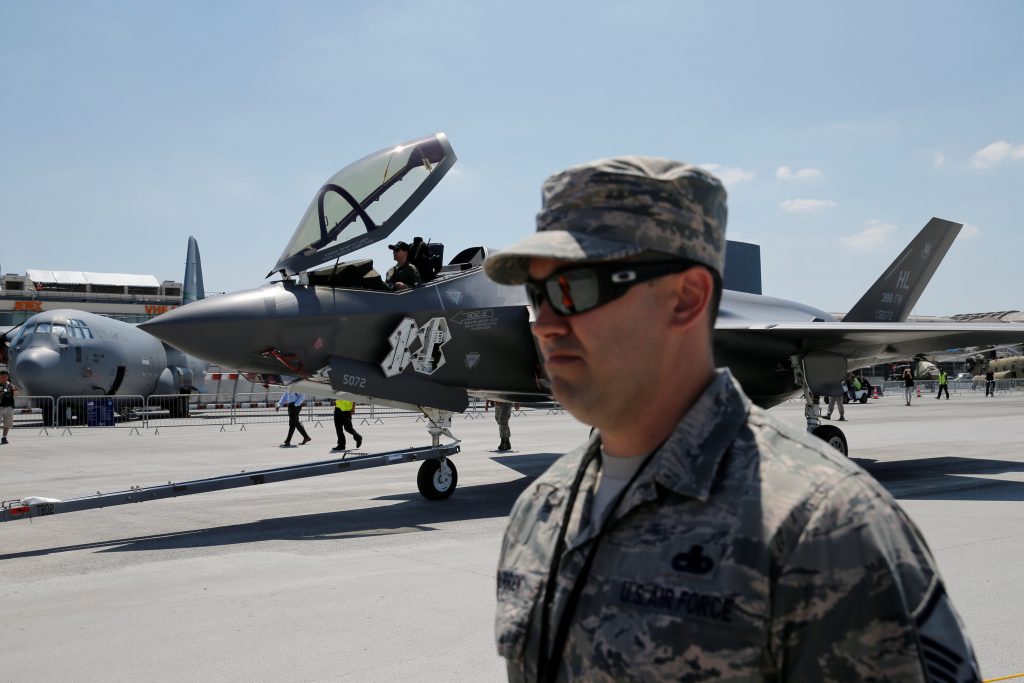 Lockheed Martin Corp is in the final stages of negotiating a deal worth more than $37 billion to sell a record 440 F-35 fighter jets to a group of 11 nations including the United States, two people familiar with the talks said.

This would be the biggest deal yet for the stealthy F-35 jet, set to make its Paris Airshow debut this week. The sale represents a major shift in sales practices from annual purchases to more economic multi-year deals that lower the cost of each jet.

The pricing of the jets was still not final, although the average price of the 440 jets was expected to be $85 million, the people said on condition of anonymity because they were not authorized to discuss the negotiations publicly.

The multi-year deal for the fighters will consist of three tranches over fiscal years 2018-2020.

A Lockheed representative said the U.S. company does not discuss negotiations on contracts and said any deal involving a “block buy” would be announced by the U.S. government. A representative for the customers including the United States did not immediately respond to a request for comment on Sunday.

The memorandum of understanding being negotiated between Lockheed and the customers aims to procure 135 or more jets in fiscal year 2018 for delivery in 2020 for about $88 million per jet, the people said. In the subsequent fiscal years, 2019 and 2020, procurement would ramp up to 150 or more jets per year.

The average price in 2019 could be $85 million for the F-35 “A” variant and could drop below $80 million in 2020, the people said. That would mark the lowest price ever paid for an F-35, making this deal an important step in reducing the overall cost of each jet.

The F-35 has been widely criticized for being too expensive, including by U.S. President Donald Trump and other U.S. officials who have criticized the Pentagon’s most expensive program for delays and cost overruns. Recently, a quarter of the operating F-35 fleet was grounded until further notice because of irregularities in the pilots’ oxygen supplies.

The memorandum of understanding will guarantee contracts will take place in each successive future year. This allows the manufacturing group led by Lockheed to take advantage of greater economies of scale, reducing the cost of each jet. They have been working to reduce the cost of the jets through streamlining the supply chain and purchasing materials in bulk.

Recently revised estimates indicate the U.S. Defense Department expects to spend $379 billion, down from $391 billion, to develop and buy 2,443 of the supersonic warplanes through 2039, one of the people said.

“This is part of an ongoing process. If it gets done, it would be a plus for Lockheed, allowing for better long-term production management,” said Robert Stallard, an analyst at Vertical Research.

The F-35 comes in three configurations; the A-model for the U.S. Air Force and U.S. allies; the B-model, which can handle short take-offs and vertical landings for the Marine Corps and the British navy; and the carrier-variant F-35C jets.

In February, the Pentagon agreed to a deal for the tenth batch of the fighter aircraft and agreed to pay below $95 million per jet for the first time, compared with $102 million in the previous purchase which was the lowest price up until that point. Around that time the Pentagon said the price of a jet could fall 16 percent to around $80 million in future purchases.

The F-35 business accounts for about 37 percent of Lockheed’s total revenue. During the first quarter, Lockheed’s revenue from its aeronautics business increased 8 percent to $4.1 billion, led by higher sales of the F-35.

Lockheed executives have estimated that a multi-year deal will save about $2 billion for the nations that choose to participate in the multi-year purchase.

Lockheed, the prime contractor, and its partners, including Northrop Grumman Corp, United Technologies Corp’s Pratt & Whitney and BAE Systems Plc, have been working on building a more cost-effective supply chain to fuel the production line in Fort Worth, Texas.